Posted by: Editor2 September 13, 2020 in Books, English Leave a comment

When people talk about India (that is Bharat), they often don’t realize that “Unity In Diversity” just as an idiom, but is the soul of the country. Being the largest democracy in the world, India is like a tapestry of different cultures, type of people, their lifestyles and beliefs. Most of the Indian states are bigger than some of the Europian countries. How this country still is so united? Well, there are many threads that weave this tapestry and the bonds between them are much stronger.

Of course, there must be some things which are common among the people and states of the country, right? And the economy is one of them, obviously. As it is said by the veteran respected political leader(s), more than once, “the real India lives in villages”. And, that is true even today. Agriculture is still practiced by a large number of citizens of the country. And, despite so many evolutions and upgradations, and in fact being considered as one of the nation having the most number of young people and IT (Information Technology) aware professionals, the country is still considered as – Krishi Pradhan Desh! Yes, the large part of the economy and social setup is still associated with Agriculture.

So, when we came to know a book named A Wall Street View of Rural India by author Sujit Sahgal by his team, we were curious to explore it. To view Rural India from the author’s perspective :).

We all have heard that “a book should not be judged by its cover”. sometimes in the right context and sometimes in wrong context as seen in some TV advertisements. The fact is, we, human beings, love beauty by our nature and attractive things impress us. Of course, there are many other aspects of a book (or for that matter, any media) that must be considered, but, the cover page makes its first impression. And, thus played a vital role in a large number of book-reading and/or purchase decisions. And, thus, we, at ThinkerViews, acknowledge the importance of the book cover. 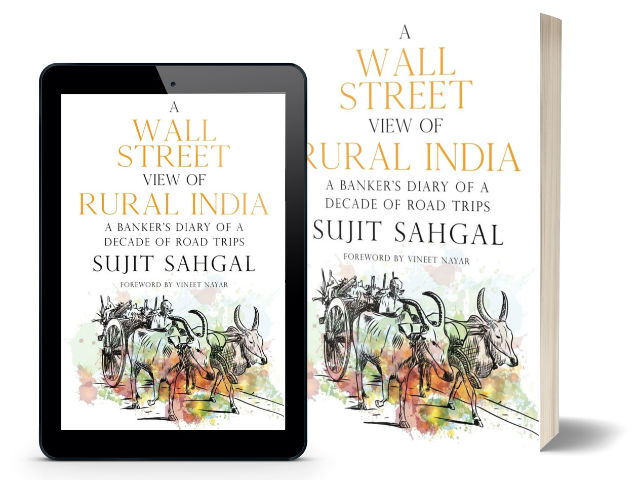 As you can see, the cover designer has done a good job in trying to elaborate on the essence of Rural India through the brush strokes. You will remember some artists like R. K. Laxman while seeing the cover page of this book. A traditional bullock-card driven by a regular (not so rich) farmer represents the theme of the book quite well. In fact, the designer has decided to use the standard fonts for the book title and tagline as well. I like the concept and the fact that the cover page is still not black and white. It has strokes of colors.

While it is not the most attractive and eye-catching cover page when surrounded by many books, but can still make its presence felt.

The Book And My Thoughts For The Same

It is worth noting that the foreword of this book is not missable. Vineet Nayar came up with some nice words.

As the look of the book and the tagline gives the primary impression of a study research paper, you may expect a lot of analytical details in the book. What comes as a pleasant surprise is a set of interviews the author has conducted with the farmers from various states of India. The author was accompanied by different teams during all these interviews.

At the same time, the author has clearly mentioned that the content of the book should not be considered as a study result and rather the interviews and quotes should be considered as “opinions” of the interviewee. If you read the disclaimer carefully, the author also mentions that some people may not be honest during the interviews, sometimes their own perceptions or the hope to get some help from the government, might be twisting facts.

The book mainly talks about the following 5 topics in detail:

The book starts with the exploration of the author’s trip to a feeder town of Uttar Pradesh. If you really are unknown to the actual flow of seeding to farming to cropping to selling it to mandi/APMC to getting profit through farming. This book is a good choice. Though I must say considering the price, you may find the book quite costly and smaller in length.

The book talks about various government schemes without any prejudices. While it applauds good things, it also draws attention to shortcomings. And, as you can imagine, the content is based on the few interviews author get a chance to conduct, the content reflects the same only.

To a keen reader this book brings a glance at the rural economy and brings the fact that people still prefer doing their investments in gold and jewelry. The book tries to cover a wide spectrum by talking about corporate farming and exploring the concept of “Land aggregation and contract farming”; and even talking about entrepreneurial farmers.

While it is dishearting to read that, while the canal networks and river channeling is growing gradually, the majority of farming is still monsoon dependent; it gives us the joy to read about the progressive thoughts of farmers. When the farmers are asked about how they want to use their profits, their priorities were found in the education of children. And, what I liked, even more, is the women were quite firm and fast to represent these thoughts.

The book also busts various myths like adatiyas and farmers are at loggerheads.

You can find both adatiyas and farmers reassuring this thought. In fact, they are having strong relationship since many years and farmers can depend on them during their thins.

While talking more about the aspects explored in the book will almost giveaway its content and I want to avoid spoilers as far as possible. Let me quote some lines from the book to give you glimpses of the quality of writing in this book.

Low farm holding lead to much lower yields as investments in irrigations, seeds, storage and mechanization are viable.

We are all friends and have been working together for years. All this friction between us adatiyas and the farmers is fictitious, and we exist in total harmony.

As government schools did not offer a good learning environment due to lack of teachers, inadequate curriculum or sheer parental aspirations, kids started increasingly attending private schools. This costs money.

It is true that the future of any system depends on some core changes in the fabric or basic elements of society that can drive change. Education is one such major foundation on which much of the economy will have to be built.

Education is the clear backbone of any economy’s future growth, and India needs this change too.

Some of the segments are named very interestingly:

Lets get IT (I) Right! The case of Vocational Training
The Big Indian Grain Drain

The book also talks about “toilets” and the need for maintaining hygiene. I wish if the impact of the use of chemical fertilizers against the organic ones, the way of pumping out water from the earth and the use of technology in that, etc. in a detailed manner, the book could have been more informative. However, every work has its own boundary.

While the book talks about education, it also talks about the fact that educated people should use education in the betterment of farming, rather than leaving it for the desk-jobs. It is rare to find such a conversation in books.

Overall, a pricey and small book that tries touching the soul of rural India in the aspects of agriculture. It is not for time pass. If you really want to know the real rural India, it is worth going for.