Posted by: Editor2 November 24, 2017 in Books, English Leave a comment

We see a lot of fantasy fictions roaming in the book world these days. Readers seem to be attracted towards paranormal novels quite enthusiastically. The success of the Twilight book series is quite evident of the same.

But, do you think someone can try mixing science, paranormal stuff, physics, astronomy, and astrology altogether and write a story which (in parts) is inspired by Mahabharata and other Indian mythologies? Debutante author Sujata Morab tried doing some in her maiden venture Dancing Strars. 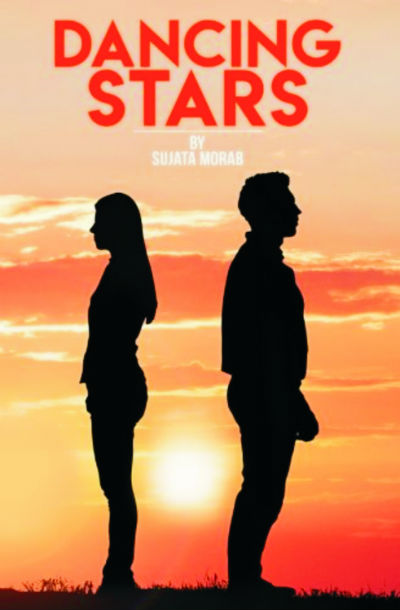 While the cover-page of the book look significant when you complete reading the book, it doesn’t give you the idea about the book properly. A majority of readers are attracted towards the book cover, and what we may say, they often make purchase decisions by looking at it. The book title and the cover page, thus play a vital role in the commercial success of the book. People often are guided or even misguided by looking at the book cover, about what to expect from the book. Author and publisher could have come up with something better here.

Let us take a bird’s eye view to the plot of the book. I will try to keep all the spoilers at the bay but some of them are inevitable.

Shridhar Shastri was born and brought up in a small (yet famous) town – Malgudi (located in the southern part of India). He wanted to get rid of the family environment he was living in, and especially the town. So after getting married to Vijaya, he left for Mumbai, which was considered as the city of opportunities and wealth. On the way to Mumbai, they met with Guruji, whom they remain connected in a way or other throughout. The life was not as easy or rewarding as expected in Mumbai for him. But, Vijaya never complained of anything.

They were blessed with a son and they were more than happy to welcome him to this world. Their son was born on the day with full Eclipse and in terms of astrology, it is not considered as the good sign! They named the boy Mahant. Mahant didn’t like his name much. So when grew up, Mahant decided to go with the name Manav.

After a few more years, Shridhar and Vijaya were blessed with another kid. It was a baby girl, and they named her Vedika. The siblings didn’t share a good relation. Mahant always tried to harm Vedika, as he thought that she somehow stole all the attention of their parents from him. Shridhar and Vijaya think of only one solution to the daily fight between the siblings. Mahant was sent to Shridhar’s (unmarried) sister’s place. Shridhar’s fortune started becoming positive since some time.

As the story progresses we meet Aarti, Gaurav, Ameta Singh, Yogi, Suryansh and Karan among others.

It is worth to note that almost each and every one of them is the best in his/her own zone. What they do in their respective lives is better to explore by reading the book.

The book definitely explores a story which is thrilling to read. It however worked for me in pieces. There are some segments in the book where you will be impressed by the author and her writing, and at the same time there are a few where you feel that the things are getting bumpy.

Sujata succeeds in keeping the book’s canvas to the effective area. The story starts in the small yet famous Malgudi, a town in south India. Then it moves to Mumbai and keep exploring places like Pune and some other foreign locations.

It is evident that Sujata is a scholar and she possess a remarkable amount of knowledge in many areas. Sometimes you feel that you are reading a Dan Brown novel, in terms of detailing and explanation. You will surely enjoy the arguments between Vedika and Mahant. Vedika’s factual discussions with her friend(s) and Guruji are worth reading too.

I would like to quote some of the philosophical lines from the book:

Even a little spark can destroy everything, when we have clipped cotton bales – then, it won’t make any difference whether the intention was to ignite a fire or to light a lamp.

If a darkened soul is being led to the light, then he should not cover his eyes to the brightness.

Teacher is not outside, he resides inside us. You just have to seek within. Only we know what works for us. Nobody can walk over the path carved for us.

When you bring a new appliance, you open the user manual, read the instructions and then start using, don’t you? In the same way, you should read the scriptures and following instructions written in them during childhood, not in old age.

Why are dark things, even in cosmos, more powerful, more attractive than the objects that have light?

It is said that when the universe wishes, nobody can stop an event from taking shape. But sometimes even the universe is not sure if it has taken the right decision.

In pursuit of money, he lost happiness.

She was always a dominating self-centered person who had no idea how to act with people who knew what they wanted.

And I have too much self-respect to take anything from you.

Love selflessly, love without attachment. Be thankful for the light of the sun instead of being irritated at the heat it is emitting.

Parents are the only God for children.

She was interested in the gift of knowledge not the package it was wrapped in.

There is at least one moment in everybody’s life that they have to do work which they absolutely don’t want to, but they know they have to.

Some of the arguments which contains authority and curiosity both:

If I am going to be a pawn at the hands of the universe, I have the right to know. I don’t like surprises, and these are terrible shock.

Here you can see a genuine experience majority of people (especially middle class people) pass through:

Shridhar could not know what made him angrier, that Vijaya invited so many people or that all those who were invited came!

You see sarcasm, philosophy and reality weaved nicely in these lines:

It is our ego which thinks, this child is mine. In fact, the child belongs to nature, to the universe.
We are just a tool. Don’t worry; the universe will tell us what to do.
Lord Krishna won’t come to raise our kids. Vijaya said sarcastically.

Religions preach us about losing ego, live selfless …. but these very religions have the biggest ego.

Following lines are quotable due to wisdom they contain:

Sushila felt she should not sacrifice her self-respect to gain others’ respect which was really not even guaranteed.

Here are some more hard-hitting lines from the book:

He was sure she was his mother, but the disjoint umbilical cord didn’t have so much power to pull him back to the womb.

Spiritual seekers should not come under influence of their moods and fancies. They should maintain Samata.

And this one is quite good 🙂

He looked at his wise wife. Now he understood why there is only one letter difference between the two words – wise and wife.

So, as you cam clearly see that there are some “not-to-miss” pieces of writing is there in the book.

It though have it’s own let downs as well. The book seriously need to have check for spelling and grammatical mistakes. Here are some of them:

Page 17
Mostly the abuses were verbal, but sometimes he would hit her. ormally, Vedika didn’t respond to his bad mouthings, but when he

Page 20
It is part of growing up. Both the children and the parents.

Whatever you want to ask Laxmi bai. Not in any case you are to bother me.”
He understood and kept out of her way. They pretended as if the other doesn’t exist.

Page 22/23
Once a year the parents either visited him or took him someplace.

Page 61
It was not his fault that she was born a Shridhar and Vijaya Shastri daughter and as Mahant’s sister.

Page 67
There are so many stories, so many songs, so many books, so many films about Krishna that if He were not there the world would not be so colorful.

The conversations about various sciences are not to be missed. Same way the details about diamond jewelery and the logic of using it to the maximum extent will interest you. Knowing something is really a good thing, but if you cannot explain it properly, it is not that much effective. Sujata is good at explaining things at basic level. So if the topic she is discussing is new to you, then also you can enjoy it, and actually got to know something from it. In that terms, this book is not just another one which is good for time-pass. Some of the stuff mentioned in the book will improve your knowledge and at the same time, some of the arguments will make you fall in the either side of the same. Another good thing is, she is good at explaining both the sides of the coin. And she give them both, almost equal weight to prove her point.

There are various scenes where you cannot link emotionally. In fact, the climax is alright from the author’s point of view, but could have been more thrilling.

I must add, to the author’s credit, that she remained away from the adult content, which many authors, even popular ones, are infusing into their book(s).

Definitely a worth reading thriller if you can ignore some bumps in the pace and literary aspects. It is like a masala film with a good spine.

We can happily give it 6 stars, if there was better spelling/grammar check, it could have received nothing less than 7-7.5 stars – out of 10.