Catherine and the Dragon World by Dharni | Book Review

Posted by: Editor December 4, 2020 in Books, English Leave a comment

Reading and writing create worlds and worlds inhabited by fictional characters and their stories are what make a big part of so many people’s lives. Like many avid readers, Dharni kudal had a dream of writing this story at a very young age and now she has completed her first story and published it on Amazon.

Here on Thinkerviews, we are always keen to explore works by new authors as we know how hard it is to pen a book and find an audience for it in today’s busy world. So when we were approached by Dharni with a copy of her book, we read the e-copy with enthusiasm and here are my thoughts on it on behalf of Team Thinkerviews.

The simple, elegant cover page of deep red reminded me of the old books with clothbound covers, with their hand-woven clothes with rich borders. True to the title and the story, the cover page features a dragon in flight. There are a couple more similar illustrations on the covers by Parth Garje and you’ll also find interesting symbols in the chapter titles. 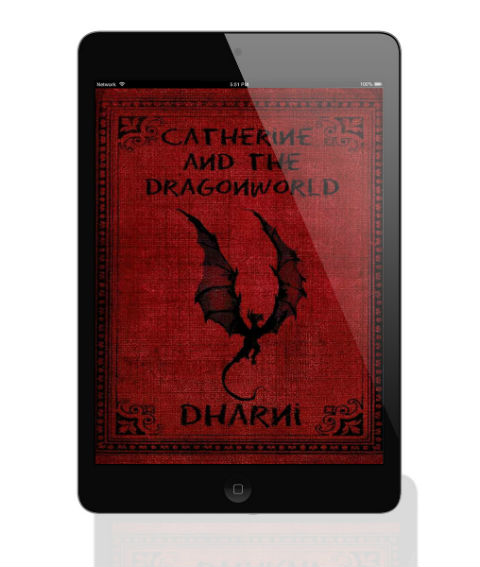 Catherine and the Dragon World by Dharni | Book Cover

If you were browsing in a sea of books, the cover page will not stand out right away and as it features a teenage protagonist, I think a more vibrant cover page will attract more young adult readers.

We jump into an ancient story, written in Sumerian about a fantastic world of Fafnir featuring outlandish places and characters. This kingdom is divided into Enki, Enlil, Nisaba, Morduk, Tiamat and Ninkasi. Like all fantasyland, there is a prophecy of a great warrior queen fighting the forces of evil to protect her people.

But, the story is left unfinished as we meet Catherine Mosby. She is a seventeen year old girl, living with her mother. Her best friend at school is called Tom and her life is very similar to any other teenager. Until one day, when she finds some very old documents while cleaning the basement. These lead her to believe that her mother is hiding secrets from Catherine and her father.

There is a map in this box that leads to an ancient cave in Dragon Hills outside their town. Catherine goes to this cave and falls into a chasm. The whole town believes her to be dead.

That is not the case though. Catherine wakes up in Fafnir and soon gets embroiled into the magic of this land where the King Dominic believes that Catherine is the reincarnation of great queen Helena and has shown up in Fafnir because it is time for a great war.

Catherine learns arts of warfare and history of Fafnir. She resurrects a lightning breathing dragon and calls him Tesla. She takes the lead when king Kurt Cypher brings war to Fafnir and nearly dies fighting him.

Was the prophesy wrong? Has Catherine come all this way to die in a battle that will lead to the end of Fafnir and its way of life? Will Catherine ever return to her mother and her lost life on Earth?

I liked the author’s imagination and how she has created a dream world with fantastical, magical tales and filled with mighty dragons. The book has a vast canvas, and once you look at all the threads that can be explored into different stories, this could be a series of many stories and many wars. The great thing about fantasy is that there are no limits to what you can imagine and create and keep creating once the readers fall in love with your characters.

The author has done a lot of research of the tales surrounding dragons, dead languages and magical tales. She also weaves in a lot of stories which are like anecdotes we tell children while trying to teach them moral lessons, e.g., the story of the defeated king who observed a spider weaving a web and learnt never to give up but keep re-trying until you succeed. In the book, the grandparents pass such stories to their grandchildren who use those to inspire their people and their armies.

Catherine’s is the main character and the authors has tried to create it like any other, western girl, living in an unspecified city and living a normal life. Until she lands in otherworldly Fafnir and has to live upto the prophecy. The transformation happens mostly in the background though and the readers gets only glimpses of what she goes through every now and then. Another character that goes through such massive transformation is Kurt. A farmer who loses his fortune and his family and gives in to rage and despair to become king Kurt Cypher. Although his ideology is correct, he is still the antagonist.

The author has many good one-liners in the book and at end of many chapters she highlights a learning or a moral observation. Lets take a look at few of those:

It is the basic principle of life that ego blurs gratitude and anger blurs apologies.

Isn’t it ironic how suffering makes the sufferer stronger, but the people close to them become weaker?

There is no drug stronger than Nostalgia:

What most people don’t realize is that memory is the real treasure which everyone has and yet no one seems to be thankful about it, what would happen if we took out all the memories from our lives and then we are asked to live? Will that be the time when we, humans will be called as ‘biologically functioning robots’?

It is a battle of good vs evil…or at least some characters would like to believe it to be:

Without good, evil cannot do their iniquitous deeds on anyone.

But matter of fact is there is no evil existing anywhere, we have demons and gods in our own voids, filled inside us and we live to provide a balance between the both.

The author emphasizes at many places that every life ha a meaning and a purpose:

It is the marvel of this universe that existence of a really small thing as of a butterfly and flap of its wing can change the course of this whole world, a small rock floating in this space affects the effect of gravitation in this entire universe, no matter how small it is.

People tend to forget that their existence is not meaningless, in reality; their nonentity can put a huge disorder everywhere.

Some of my favourite parts of the book are when the author talks about how we forget to appreciate what we have and the small things in life that actually make a difference and pine after what we do not have and focus on the negative side of life:

It is the very human nature to be dissatisfied with what they have. People don’t realize how beautiful this world is, they just need to widen their visions.

Isn’t it the truth that we dwell on our past mistakes and cling to our future worries most of the times? We keep on shuttling on being in the future and the past so much that we lose our grasp on reality- the present! It is hard for anyone to stay in present for a long time, but we should always remember this that the past will poison us regrets and the future will incur us with worries, being in the moment is what we should do ideally.

So as you can appreciate, the book has a lot of good content and a story with big canvas and potential. The let-down for the book is its size which at time does not allow the author the explore the threads of her story completely. The book could use a good editing cycle to improve the flow of narrative and take out errors. There is room for improvement in dialogues to give them consistency and the right feel of the world they belong to.

All in all, a good fantastic tale to explore if you have a few hours on hand and looking for Dragonworld…