The world around us is changing very fast and educating young minds is becoming even a bigger challenge with that. On one hand, it may seem that with access to so much information, children are learning a lot more than the previous generations. But they are still young, their minds still need to learn to disseminate the information and take what is good for them. The constant exposure to self-centred social media posts may influence the way children assess their self-worth and turn them into bullies rather than show them how to be just plain good and kind in later life.

And that is why its more important than ever that the stories and books targeted for young readers are also teaching them as well as entertaining them. Here on Team Thinkerviews, we are always exploring new authors that write for young readers, and recently we came across an interesting series of books by author Roshani Chokshi.

Roshani has inherited two cultures through her parents – Philipino and Indian. Add this to her American upbringing, and you have an intriguing mix of cultures and imagination that led her to write her first successful series of books called “The Star Touched Queen” in her teenage years. Her work was loved by readers, and so like many other author collaborations, she came up with another interesting series as part of “Rick Riordan Presents” in 2018.

In the fashion of the Harry Potter and Percy Jackson titles, this series features a young girl named Arundhati Shah. So, let’s take a look at “Aru Shah and the End of Time“. 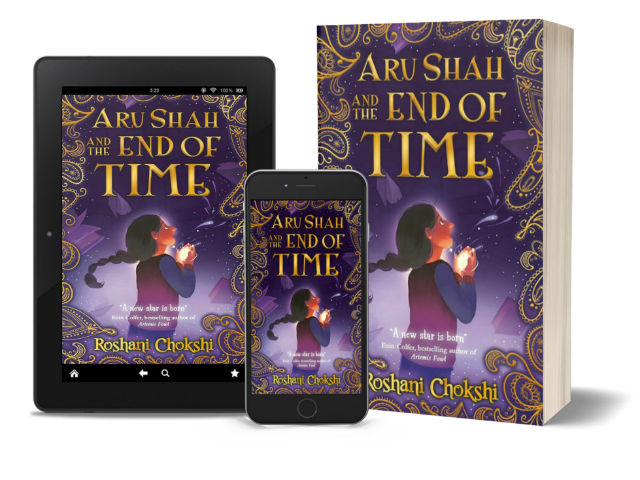 In Atlanta, young Aru Shah is wondering on the first Saturday of her autumn break, as to how will she spend her holidays stuck in the “Museum of Ancient Indian Art and Culture“, run by her mom, which is also their home, while rest of her classmates go away to exciting places. Still, in her spider-man pajamas, she is surprised when three of her classmates show up at the Museum door to check up on her. You see, Aru has been in habit of making up things to fit-in, e.g., she is known to say that she goes on foreign holidays with her mom, that the most expensive car in the school belongs to them, or that she shops at exclusive designer chains.

So the classmates are here to catch her and they start filming Aru on a cellphone, daring her to prove that she is not a liar. In a desperate moment, Aru tells them about the cursed lamp in the Museum and how she is never supposed to light it. The dare goes farther and Aru lights the diya.
The demon – Sleeper – trapped in the diya is free, and the moment he is out, time freezes around Aru. Her classmates, her mom, everyone becomes suspended and frozen in what they were doing. The Sleeper will go and wake up Lord Shiva and the world will end only in a few days time… What has Aru done?

All is not lost yet though. As Aru has awakened a demon, she has also awakened the dormant Pandavas that are born in every generation and guess what, Aru is one of them. Her mentor, protector, educator is a Pigeon. Named Subala, this illustrious pigeon tells Aru what is happening and guides her through the door of Many to go and find her siblings.

And so Aru meets Mini – short for Yamini. Another young girl whose family is also frozen. The two unlikely “sisters” travel to the Otherworld, where they meet Lord Hanuman and Urvashi to get some guidance. Here, they find out that Mini is the daughter of Dharma Raj and Aru is the daughter of Indra. So, they are like Yudhisthira and Arjuna of this generation. Mini gets a mirror and Aru gets a ball from the Devas and off they are sent on their quest.

They must get the Sprig of the Youth, Bite of the Adulthood and a Sip of an Old age. These three keys will allow them to enter the Kingdom of Death. Here, they will find the Pool of the Past. By looking into this pool, they will find the secret to defeating the Sleeper. And while doing this, they also must awaken the Celestial weapons (Divyastras) and get those before the Sleeper does.

A lot of steps for the two young girls… Can they achieve the impossible and succeed in their mission?

I liked the book for its lightness, humour and vibrant energy. Roshani Chokshi keeps the narrative filled with snappy conversations and zappy one liners as the characters get introduced and come to terms with where they have all landed.

Re-telling of Indian mythology is a very popular genre and every year countless books come out with that concept at their centre. This book blends the modern with the ancient. Its central idea is the rejuvenation of the Pandava brothers in five young girls, but the girls are from our world and they bring up a lot of popular cultural references from the Matrix, to the Hunger Games to Game of Thrones to Bollywood, while chasing their fate through the mythological puzzles and stories told by their Indian parents at home.

For example, the author re-creates the Night Bazaar in way of a huge supermarket that caters to the needs of worlds of humans, demons, demigods and a lot more:

Who says it looks like a supermarket to them? Who says they are even in United States? The world has many faces, children. Its only showing you one at a time. The Night Bazaar has had to adapt, change form, and account for things like families moving to new countries and imaginations evolving.

Or when she tells the story of how a murderer turned into a sage – Rishi Valmiki and brings him into the story when the girls go to him for advice. Valmiki not only forces them to speak in verse, but also talks about writing the epics covering their adventures:

This is the new age of epics.
We have the legends and poems of yore,
but its time we offered readers some more.
Promise to give me one day of your life,
and I will grant you the gift of less strife.

The author here does a good job of blending a lot of mythological stories in short doses, e.g., the story of the demon who burns everything she touches, or the stories of Urvashi and Pururava, or Shukra and Irsa, Samudramathan and a lot more. She makes the Indraprastha into a true “Palace of Illusions” and sends the girls to the court of Ritus (Seasons). Because most of these stories are in small doses and glimpses, she has a bit more freedom to tell those and can make a few changes, e.g. the story of Arjuna and the Eye of the Bird, here becomes story of Arjuna and the Eye of the Fish, or Bhasmasur becomes Brahmasur and so on. The mythology and magic become the spice in the story of two young girls and their adventure to fight demons, both internal and external.

Through it all, through the story of Valmiki, through the stories of Shakuni and Suyodhana and to the stories of Aru and Mini, there is a central thread as to whether people can change. Aru thinks not, but then Shakuni who caused the war of Mahabharata is helping the Pandavas now and Suyodhana did his best to fight his own destiny of becoming a sleeper, so maybe people can change. At any rate, it is important to believe that they can because we all make mistakes in life and if there were no second chances, there will be no redemption. Aru herself made a mistake when she lit the lamp, or was it just the matter of time?

One of the best things about stories was that villains could be heroic, and heroes could do evil. Everyone has a bit of good and bad in them. Makes you wonder who the villains really are. Was she a heroine if all she did was fix a mistake she made? Or was it heroic because she was willing to fix it in the first place?

Both the girls – Aru and Mini have their own struggles. Aru feels lonely and abandoned while her mother devotes almost all her time in tracking ancient Indian artifacts while Mini is always left behind by the parents who believe her brother would be the next Pandava. Both girls struggle at finding their place in the schools and generally their classmates are not fond of them. And it is very very hard to deal with the feeling of “not belonging” at that age:

I just don’t want to be left behind. It happens to me all the time, and I hate it.

Aru was tired. Tired of lying. Tired of imagining the world as it could be and not as it was. She was tired of making herself bigger and better in her own head when it was clear that she never would or could be in her real life.

Through this quest, both girls find a family they belong to, through magic and mythology, they discover a lot more of their inner self:

People are a lot like magical pockets. They’re far bigger on the inside than they appear to be on the outside.

Escaping was discovering a part of oneself that no one else could find.

They also learn what it is like to be destined for something. In stories, it is a glorious thing. In real life, not so much. Imagine having no control over your own life or the freedom to make your own choices. If the journey of your life was already written for you, then was there any point in making any effort? But we humans always want to make our own fate, and we may make a lot of mistakes on the way, but that’s what life is all about – living:

Be warned: regret will always follow. It is the price of aiming true. For sometimes, when we take the deadliest aim, we are nothing if not reckless.

Secrets are curious things. They are flimsy and easily broken. A fact on the other hand, is strong and powerful. Unlike a secret, its out there for everyone to see and know. And that can make it more terrifying than even the deepest, darkest secret.

Our destinies aren’t chains around our necks, but wings that give flight.

This series of books is a good example of how you can blend ancient mythology with your imagination to create an adventure story that will resonate with today’s children. The book proved to be popular and so has been followed by:

We have enjoyed the series so far and can recommend it to all young readers who love mythology and adventures filled with magical beings and weapons….

Previous: Catherine and the Dragon World by Dharni | Book Review
Next: Aru Shah and the Song of Death – Book 2 of Pandava Series by Roshani Chokshi | Book Review