Posted by: Editor December 1, 2020 in Books, English Leave a comment

How lucky we are as readers to live in this cosmopolitan world where your Kindle can bring you a slice of anywhere in the world and any splinter of time in that world. As you know, I am fond of audiobooks and always trying something or the other there. This book by Liz Rosenberg has been featuring on Kindle Unlimited off and on, and so when I found it in an audiobook format, I picked it up right away.

The premise of the book is so interesting, set in Singapore of the 1920s. Known as “roaring twenties”, this post “World War I” decade has been in favour with international authors over last few years as they have dissected and examined these years when society suffered big blows like the aftermath of the first world war, the Spanish flu pendemic, the poverty and the depression and the loosening of a lot of old society values.

Then Singapore itself is such a culturally eclectic place – predominantly Chinese, Indian and Malay, it was colonised by the British and in spite of its very small size has managed to flourish as it has embraced the cultural influences apparently seamlessly. But there is always a darkness and tension simmering in such a place and I was hoping this book will show some of it. 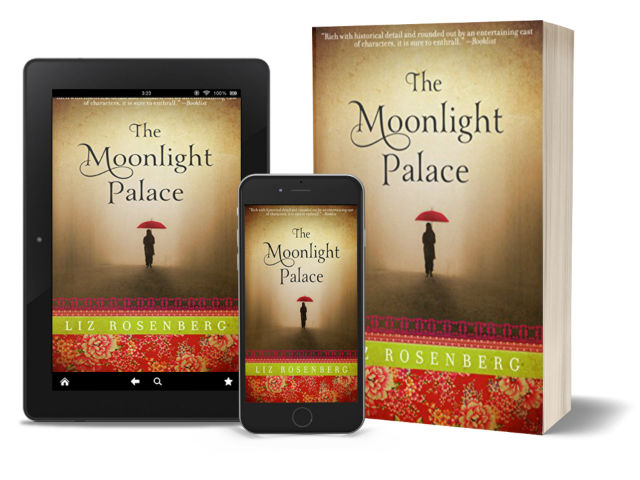 As you can see above, the coverpage shows silhouette of a young woman walking through the mist covered landscape in search of her goals. The rich, intricately beautiful design at the bottom of the coverpage reminds the readers of a beautiful, silken garments like Indian Sarees or Chinese gowns. Although thought provoking, the coverpage is slightly generic and doesn’t really make most of the Singapore as the background, rather it emphasizes the journey of the young woman to find herself.

Seventeen year old Agnes Hussein is still in high school. As she describes herself, she is half Chinese, quarter Indian and quarter British. An orphan, and one of last surviving members of the family of the last Sultan of Singapore, she has grown up in the Moonlight Palace, the Kampong Glam palace, built for the Sultan by the British in return for the ownership of Singapore.

Agnes’ mother, father and brother passed away in the Spanish flu pandemic and she was raised by her mother’s parents – British Grandfather and his Chinese wife whom Agnes calls Nei Nei (Grandmother in Chinese) Down. They live with Uncle Chachi, who is half-brother of British grandfather and a few faithful servants.
The palace is literally crumbling around them and the family takes boarders to make ends meet. One of these, an Indian boy called Dawid is Agnes’ dear friend. Agnes also takes on a part-time job in a jewellery store in “Little India” run by Mr. Kahani and eventually starts writing social columns for a newspaper called “Singapore Gate“.

But their lives are irrevocably changed on the night of Deepavali. While Agnes and Dawid are waiting for the fireworks, they find that one of their boarders Omar Wahlid has been caught with explosives strapped to his chest. Omar and the other boarder Wei are taken to the Chinese protectorate and badly beaten. And enters a British policeman called Geoffrey Brown.

Agnes and her British Grandfather go to the Chinese Protectorate with him and shocked by the physical condition of the boys, Agnes pleads with her grandfather to save them. Omar will be deported to Malaya but Wei – a Taiwanese student – is facing a certain death as the authorities believe he is a communist radical.

British Grandfather does save Wei, but loses a lot more in return. Unaware of this, Agnes is head over heels infatuated with Geoffrey Brown and blind to the disaster looming over their heads.

By the time she realises that Geoffrey will take the Palace away from them as soon as her British Grandfather is gone, Agnes knows that her world is changed forever…

I found the book an interesting read for its setting, its characters and the cultural observations of how a Singaporean sees herself and how the world sees them. Being a mixed race person is difficult no matter where you are, but Agnes seems to be generally happy with her existence and doesn’t find this unusual, because Singapore is a place like that. Although there are racial issues in the background, e.g., her British Grandfather lost his commission when he married a Singaporean woman. Agnes is aware of her place in the world, but she is also certain in her pedigree and the fact that she belongs to Singapore.

She is exposed to the British way of life through her Grandfather, Chinese traditions through her Nei Nei and Indian customs through her friends and employers. She also has an Irish friend called Brigitte, and all these characters walk in and out as Agnes takes us through celebrations of Deepavali and Christmas in Singapore of the 1920s. But no matter how young she is, she is aware of her family’s plight and has the courage to go out in the world and work for money.

She does have her first infatuation/love affair and is brutally made aware of the greedy nature of the world and the general unreliability of people we may love but not really know. In some ways, this is coming of age for Agnes and the readers will like her and sympathise with her, as she realises that:

Once upon a time, I lived in a palace like a poor princess in a fairy tale and thought I had everything I wanted or needed— the turrets and winding staircases, the gleaming marble floors, the wooden parquet and the gardens. I even believed I had found a prince to rescue me. Now it was all in pieces, like a nest that had been kicked to bits..

You know the famous tales that were told to support colonialism, like, the British saved Indians and gave them modern education and infrastructure, etc. Agnes also has heard that:

We were told that the British saved the Singapore from Singaporeans but may be the British didn’t need to save us. They just wanted what was ours.

The story here is quite episodic, i.e., it is told in bits and pieces and some characters show up with interesting bits and background only once or twice. This leaves the readers wondering about what happened to them e.g., Mr. Kahani with his blindness, his opium addiction and his almost supernatural ability to perceive. And as the author says in beginning, these are the bits that Agnes remembers and shares with the reader:

Memory is made up of one part perception, one part intuition, and one part pure invention.

I am glad that I listened to this story, as the narrator Amy McFadden does the Chinese, Singaporean, English and Indian accents as she goes through the story. It is always entertaining to listen to Indian expressions like “Shubh Deepavali” in a foreign accent :). We also get a bit of the Pidgin Singaporean here and there.

The book is set with a lot of conflict in the background, but in general, it is a gentle book that does not include many confrontations. If you are looking for a glimpse of Singapore in 1920s, and have a few hours, then try this book. I am sure you will find something to like or to comment upon…