Crime fiction is one of the most popular genres and books in this category sell by millions around the world. Readers have fallen in love with detectives created by their favourite writers and follow their adventures with avid interest. Here at Team Thinkerviews, we are always adding a variety of books to our kindle collection and that includes a lot of contemporary crime fiction as well.

Published by Notion Press in 2017, this is her first murder mystery fiction book featuring detective duo Darius Modi and Kavita Tandon, as they tackle a cold case and try to resolve a murder that took place decades ago.I found the premise interesting and read the book, and here are my thoughts on it. 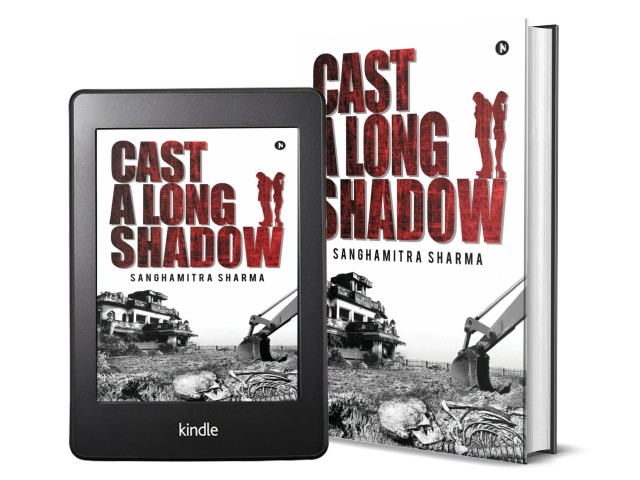 With the impressive font and color combination used for the book title, the designer won half the battle. The rest of the cover page is in black and white, with the shades of grey, of course. A haunted house is scene in the backdrop of a site where excavation is going on. The skeleton pieces found from that is also visible on the cover.

Overall, a detailed cover page that is moderately impressive.

An old property in Versova has recently been sold to a developer and as the bulldozers start tearing it apart, they discover a skeleton that has remained buried for a long time.

The property belongs to an influential Marwari business family – the Maheshwaris. As police officers connect dots and identify the body as that of Manorama, the Maheshwaris come into the limelight as prime suspects. Manorama was dating the oldest son of the family Avinash, was a friend of younger son Shishir and at some point was offered money by their father Ramnath Maheshwari to disappear from their lives. Then she did, only she was murdered, and had not gone away as everyone thought.

The Maheshwaris engage MTI – Modi and Tandon Investigations – to find the truth. Run by partners Darius Modi – ex lawyer and Kavita Tandon – a bright, ex-MNC management professional, the agency is relatively new in the field. But they are determined and persistent and they have good friends in police including DCP Vasant Kulkarni.

And so the investigation starts. As Darius and Kavita start their interviews, there is no dearth of suspects – Ramnath Maheshwari, his sons Avinash and Shishir, their college friends including Avinash’s brother-in-law Ajay Kanoria, their family lawyer Rajesh Kapadia and many more.

Darius and Kavita also visit Manorama’s mother – her only family – in Dehradun and her close friend at the time Kareena Menzes to get a picture of the murdered girl – a young, beautiful and vivacious 20 year old, who was murdered on the night she thought she was going to marry Avinash.

It is hard-going by all means, as none of the Maheswari clan is telling the full truth. But, someone from the past is connecting the dots and decides to become a blackmailer. This is Larry Fonseca who also went to Sydenham college in 1987 and was friends with Shishir. His body is found in an abandoned car.

As police is in hot pursuit of his murderer, a third murder takes place – this time an old watchman at one of the Maheshwari factory.

How may lives will be lost before the detectives reach the truth?

As you can see above, the story is interesting and features a lot of characters with their intertwined lives and loyalties making it a murder mystery with no lack of suspects. I haven’t named all the characters above to keep spoilers at bay and to not confuse the readers with too many character names. Such cases are not uncommon, but the exact identification of victim is only made possible through use of DNA matching technology which allows the police to pinpoint the identity of the victim with certainty.

I liked the way Manorama’s character is brought to life through memories of other people around her. As the author slowly builds up the beautiful girl, who was so young and in love, and to some extent naïve and inexperienced, to have come to such an underserved end. She had some good friends, but there were certainly people who didn’t like her. Like every girl, she wrote about her feelings and her uncertainties in her diary, trying to make sense of life.

And as we get to like Manorama, we do see the limitations of everyone around her, the Maheshwari family and their introvert look at their world, the jealousies and insecurities of her other friends. The author gives us some good lines on how Manorama would be seen as an outsider always:

The world of the rich is quite tribal. To tem, being with the familiar, relatives and school and college friends is the most important thing in life.
When love stories go wrong it is either the absence or presence of money that tips the scales.

Throughout the book, the author reminds us of the quiet competence of the police force that does a good job of solving cases within their limited time and resource constraints, without getting much credit for it:

Quiet competence and success without noise was not success at all and not worthy of emulation.
Be successful, but don’t seek out too much public attention.

I quite liked the characters of Vasant Kulkarni aka Vasu and younger police officer Sawant and I think we could have more adventure stories featuring them on their own. It would be good to meet those again.

And then there is the central duo of Darius and Kavita. They are intelligent, hard-working and likeable, and make a good team. Both have tried the conventional jobs, were successful in those, but a happy chance and desire to not get stuck in the rut now sees them settled in this old-fashioned office block, left to Darius by her aunts and making a living through investigating. Apparently, this is one of the very lucrative industries to be in in today’s India:

MTI was just one of over 700 outfits operating in India, many of them Mom and Pop operations with the owner doubling up as a detective, accountant and office boy. All you needed was street smarts, an office, and a painted signboard. Technology was helping the game; smartphones, the net, good hackers, and people wo could be persuaded to use very sophisticated equipment to copy and photograph whatever you need. But in the end, whatever means used, you needed patience, persistence, networking, total discretions, and a lot of hard work to thrive in the business.

The author makes Mumbai a character in itself, as it was in 1987 and as it is now, how it has changed, takes us through to popular eateries as our foody characters visit those and roam its streets at night:

All great cities are their worst and their best at night. At their best because the darkness hides their flaws and the majority of people out on the street are law-abiding citizens who have worked hard during the day and deserve to have a trouble-free evening out. They are at their worst because it is also the time for the law-breaking inhabitants to come slinking from out of the shadows to rob and kill and bring grief to the rest.

The book is generally well-written, especially the first few chapters as the story moves and we meet various characters. But then it looses its pace. Instead of following the investigation, the threads go on to repeat some of the already known information, the romance between Darius and Kavita and family interactions of the Maheshwaris. While Darius and Kavita make some progress through interviews, the real clues and hard evidence comes their way only through police investigation of recent murders. The book could use a really good edit to reduce its length and keep it fast-moving through the events to be a better murder mystery.

There are a few proof reading errors, e.g, Chapter 28 starts with Rajesh Kapadia entering the room, but through next few pages, he is referred to as Ramesh. There are also a few typos here, e.g. ‘head’ instead of ‘heard’ on page 222.

All in all, a decent murder mystery featuring a cold case and interesting set of young investigators:

Drive my dead thoughts over the universe,
Like withered leaves, to quicken a new birth;
And, by the incantation of this verse,
Scatter, as from an unextinguished hearth,
Ashes and sparks, my words among mankind.

Daredreamers: A Start-up of Superheroes by Kartik and Ravi Nirmal Sharma | Book Reviews