David Baldacci is a well-known name to crime thriller readers world-wide with having sold more than hundred million copies of his books. We have been exploring his works, especially the ones that are available in handy audiobook format, and have reviewed his Atlee Pine series:

Recently, I had a chance to listen to his book called ‘One Good Deed‘. Set in 1949, this book is reminiscent of the era when American went West to seek fame and fortune and had a distinct adventurous flavor to it that had become trademark of books and movies set in the wild west of USA. The book is an entertainer and here are my thoughts on it on behalf of Team Thinkerviews. 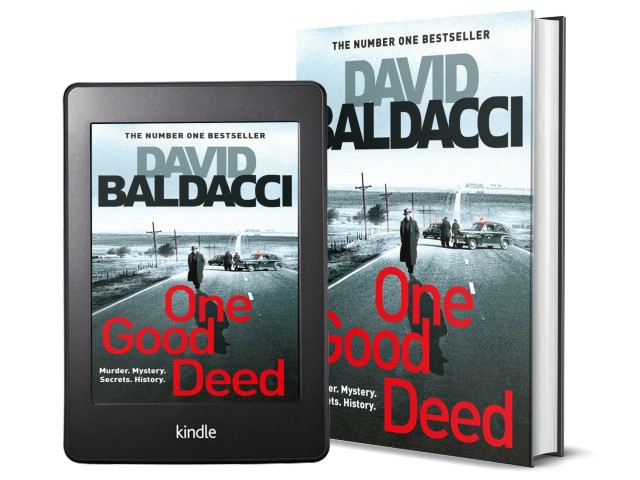 The previous version of the book had a different cover page, the above specified one is better as per my opinion.

You see a man wearing overcoat and a hat is moving forward on a road and in the backdrop you see a car where a couple of people are talking. In the background you see a detailed landscape. A very well-thought and well-designed cover page that will attract readers and potential buyers towards itself. The color used for the title is attractive too.

Aloysious Archer has an unusual name. But so far, his life has not been that unusual. Like most men of his generation, he fought in World War II, on the European forefront and was lucky enough to come back alive. Although the experience has taught him many lessons in understanding human nature, he still makes the mistake of trusting a wrong person and ends up in Carderock prison, in spite of being innocent.

Finally, after years of counting seconds, he is out on parole and is sent to Poca city. This is supposedly a quiet, country town where the prisoners should be able to abide by their parole rules. Archer meets the parole officer Ernestine Crabtree and then heads out in this town to find a job.

As it happens, his luck would draw him to the local businessman Hank Pittleman, who practically owns everything around here. Archer is hired by Hank Pittleman to retrieve a debt from a man called Lucas Tuttle, who used to be the big shot before Hank came on the scene. Unaware of the history between the two men, Archer accepts the job.

But when he arrives to Lucas Tuttle’s place to find his shotgun aimed at Archer and learns that Lucas Tuttle’s daughter Jackie is Hank Pittleman’s mistress, he realises that he has let himself into a deeper web than he imagined.

The small job turns complex and if that is not enough, Archer gets involved with Jackie Tuttle. Right on the night, when Hank Pittleman is murdered.

Understandably, Archer is the prime suspect. With no home, no job, no money and presumably no friends in this alien city, he is reduced to butchering hogs to earn his daily bread, while the police is hot on his footsteps.

A second murder follows and the list of suspects is getting shorter. Archer’s only shot at proving his innocence is detective Irving Shaw. When Shaw is attacked and ends up in hospital, looks like Archer’s days of freedom are over……

The storyline above is only brief and avoids spoiler, but the cast of this drama contains a lot more in terms of plots, twist and characters.

Firstly, there is the setting. And you never forget it not only as the author describes the town, the buildings, the clothing, the food, the cars and so on all throughout, but also in the way his characters think and speak. Today, Las Vegas has come to be the epitome of debauchery and entertainment, but in the days of this book, it is considered scandalous to have a city like that. Wine is not the spirit everyone drinks, they even doubt if years and years of storage might not spoil it.

And then there are the women. There are multiple places in the book, where their male counterparts call them ‘just a woman’, completely underestimate their intelligence, strength and cunning and display chauvinistic behaviour. It is a reminder though that women may have seen leaps and bounds of progress during the war years, but once that was over, the previous patterns of life asserted themselves to a large extent. Ernestine of this book, still reads Virginia Woolf and longs for a ‘room of her own’, as cliché as that expression has become over years. Jackie Tuttle has to become a bigger bully’s mistress when she wants to escape her abusive father.

All these are constant reminders that we are looking at the past. The dialogues are almost filmy, but then this is an entertaining thriller. There is enough intrigue in the book and plenty of bloodshed – human as well as animals.

Archer is a likeable character – especially when put against the other maniacs out from Carderock prison. Plus we sympathize with him for having done jail time in spite of being innocent. He is intelligent, slightly lost and essentially looking for home and a purpose for living. He is good at asking questions and the reader will delight in the fact that he has a shot at becoming a private detective after solving these murders and that we may meet him yet again.

If you like the old detective fiction, like the books of Dashiell Hammet or Raymond Chandler, than ‘One Good Deed’ is likely to appeal you. As I mentioned, I listened to the audiobook version published by Macmillan and read by Edoardo Ballerini and quite enjoyed it. I can recommend to audiobook for those who need to make time for this on the go…

An entertaining crime thriller set in American mid-west of 1949 that will make a perfect weekend read….