The human mind is a strange creation. It can do wonderful good things and at the same time, it is capable of creating havocs also. When we see the crime in society we see it backed by many things. The social and financial circumstances, the way the person grew up, the choices he/she had at certain junctions of life,… plays a vital role in his/her course of action. But, in most cases, there has been a “choice”, that leads to the actions.

Some crimes are committed in such a mysterious way that it turns out completely different than what it seemed at first glance. That’s where a detective comes into the picture. Detective fictions and crime thrillers are enjoyed by the people a lot. And, it is not necessary to have a criminal mind to enjoy such stories. On the contrary, vigilante people love solving crime related puzzles more often. Actually, such stories often prove to be a good mental exercise that help “the little grey cells” in development.

We love reading such thrillers. After all, it is rightly said that “reading is to the mind what exercise is to the body”.

Today we are gong to talk about a thriller named Bhoot, Bhavish, Bartaman By Mehool Parekh.

Published by Leadstard Publishing this book is a detective fiction blend with police procedural. We got a complimentary review copy of this book. The review is, as always, unbiased and uninfluenced by all means. 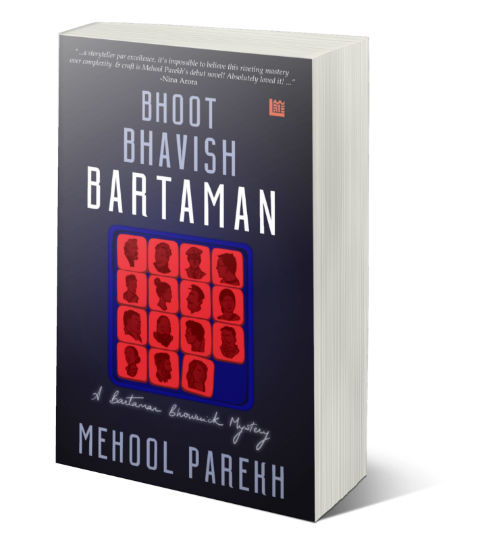 As you can see, the dark background makes it appealing. You can see illustrations of the faces of some prime characters in a small game board where you can move pieces. The color theme for these photos will remind you of photographic negatives in the darkroom (that became almost vintage these days, in the era of a digital camera). A nice way to represent the past and mystery both. The book title and taglines are written using light colors.

Major Bartaman Bhowmick (popularly referred to as Batty) is stationed at Pune cantonment. He was enjoying the party of a colleague. In the city, a girl named Rupali Jadhav was stabbed to death in her home. The attacker has vented out his/her frustration and anger by stabbing her 16 times! Definitely, an act of revenge. The dead body of Rupali doesn’t show any sign of struggle, it was calm!

Sr. Ins. Ravi Lokhande, the in-charge of the team including Const Rajan Shinde came to the conclusion that it must have been a murder committed by the servent. There are some circumstantial evidences backing this theory.

Batty and reporter Robin Chowdhury thought that this case is not as simple as it seems and they need to team up again to uncover the truth. Batty applied for 10 days leaves and with the help of his cousin, he and Robin got the permissions (and ensured full support from the police department) to investigate this case.

But, is it a really complicated crime or it is simply an open and shut case.

The story moves in two parallel threads, one thread explores the life of Rupali from her early age to her death. Another thread is obviously traveling through the investigations of Batty and Robin. And, during these courses, we meet Prof. Vinay Sahastrabuddhe, Deep Kalra, Abbas, Madhav, Sudesh, and Dr. Manohar in some prominent roles. To support them there are Rohini, Uday, Vaishali, Vitthal, Saraswati, Priyavardhan, Col. Bakshi, Col. Shyam Punjwani and many other characters.

Mahool Parekh, the author, came up with some interesting points in this book. I found it a good thriller and the suspense is built quite interestingly. We can surely expect more thrillers from the author and curious to explore them :).

I will try to avoid as many spoilers as possible, but some of them are inevitable so please read with that consent.

The title of the book is quite interesting; Bhoot (The past), Bhavish (The Future), Bartaman (The Present); represents all the respective time segments. Interestingly, the name of the male protagonist is also Bartaman (Major Bartaman Bhowmick).

Strong characters is one of the strongest points of this book. Almost all the characters have their own shades of grey and that makes there real. Also, the way the author has named them is interesting too. The analogy of the name of Bartaman and Robin and their comparison with “Batman and Robin” makes them more interesting. In this book, you can find references to some real-life characters like Rakesh Maria and Anil Kapoor. At the same time you will find references to character of Poirot (the famous fictional detective by Agatha Christie); through the phrase “grey cells” :).

A film plays an important role in the story as some of the characters are associated with making of them. If the star cast and other aspects of this film – “Crash” (as it is named in the book) reminds of the actual Hindi film with the below-mentioned song, you must be a movie enthusiast.

Of course, the author comes with a disclaimer and claims everything is fictional, we also maintain the same. The inspiration, however, can be taken from anywhere right? :).

Friendship is a very interesting relationship. It is one of those rare relationships that we commit to by our own will. A person befriends with the one who he/she trust and has similar thought process. Here is a quote from the book that shows the bond between Bartaman and Robin.

Batty always marvelled at how accurately Robin could figure out from his voice and tone whether he was bored, upset, buy, drunk or just plain preoccupied even when he tried his utmost to sound the same at all times.

Being a thriller, this book has some interesting lines about the human psyche and the way we think. Here are some of them.

A lot of small details get obfuscated once fear takes over.

Silence works wonders in creating pressure on the person who is talking. Most times, people keep talking just to avoid the discomfort of silence.

The book has some words of wisdom for everyone.

Better not ask those questions for which one was not ready to hear the answers.

Arguing with idiots had the same effect as spitting at the sky. Your projectile landed back on you sooner or later.

The way the people on the other side of the law (or those who want to con others by any means) think is elaborated quite interestingly in this book:

… Instinctively aware that value lay in not easily letting people get what they want,…

… an attractive woman finds eager believers and a good manipulator can always mould her story the way she wants to.

Here is something everyone needs to understand, for their own safety.

Batty marvelled at how observant servants tend to be. The employers may not think so but servants and employees tend to know exactly what is going on in a home or in an organisation often far more than the employers suspect or think. Nothing escapes their attention.

The book has some real stuff to convey about the way people are living (wrongly).

He knew people from his family, particularly the younger generation, who could devour an entire pizza but if served with regular homefare, would eat a tiny bit with great difficulty. They were usually not hungry unless it was their favourite food. And then, you couldn’t stop them.

… They were actually willing to sacrifice health for emotional reasons. When will Indians learn to take their health seriously?

Again, it is all about choices one has and what he/she acts upon.

The author brings in some interesting lines to elaborate respective scenes. For example:

The building lift was temperamental and Lokhande had to climb three stories to get home.

And yes, he talks about the times when despite knowing the fact, one has to surrender to the spouse, especially to keep the peace at the home.

…The price one has to pay for marital peace…

It is definitely an interesting take on the social canvas, applicable to both the genders.

It seems that the author himself likes discipline and honesty in work. He seems to get irritated when seeing something out of place. He vents his thoughts in a scene of the book, that tells everything.

…”Kalra’s”, the poor grammar of which made Batty wince inwardly. Why people converted their Surnames into possessive nouns was a mystery he never understood…

At the same time, I think, the book could have been a little better proof-read. You will find phrases like “boss’s”, “abbas’s” that could have been written properly. Sometimes unnecessary space – whitespace – (or lack of it) should have to be taken care of properly. Here is a sentence, for example, where you think “Over thinking” should be “overthinking”.

Apart from such minor errors, I found the book quite an interesting thriller. There are cusswords and reference to adulteries, which makes the target readers group restricted to be matured ones only. Of course, there are many other aspects like the way the book has explored the con-acts, life in poverty, banking system, scams and other stuff… I must have talked about here, but need to avoid them to avoid spoilers. The quotes above must have given a fair idea about the content and quality of the book.

Overall an interesting thriller that remains true to its genre. If you love exploring police-procedurals, you will enjoy it. Obviously, for mature readers only.