Vince Flynn was an American author who created a series of books featuring CIA operative Mitch Rapp. Frustrated with rules and red tape, Mitch Rapp is known to wage his war on terror on his own terms and can go to extraordinary lengths for what he believes needs to be done.

The books have generated the fan-following of their own like the works of Tom Clancy, Robert Ludlum, Lee Child, etc. and Mitch Rapp has a lot of admirers. Sadly, Vince Flynn passed away due to illness, but the series is continued by Kyle Mills since 2015.

We have been exploring some of the books from these series, and we find these are entertaining thrillers. So, here are my thoughts on Consent to Kill on behalf of Team Thinkerviews.

Let us take a look at various versions of the cover page of – Consent To Kill. 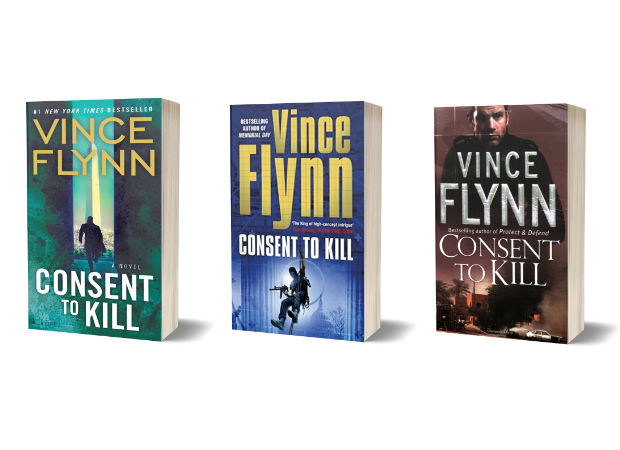 It is obvious that with each new reprint/version, the publishers try to enhance the cover page of the book to reflect current trends using the latest technologies. As you can see the cover page of this book is evaluated over time. It also proves a fact that the book is reprinted many times, showing its popularity.

In the first version, you can see a person running towards the depth and the background of the same is dominated by green and black colors. In the second version, you can see a para-commando loaded with full gears is landing through the rope. His appearance is marked in a white circle and more or less, the blue color dominates this version, especially background. The third version is more clear in terms of graphics and objects. Also, you can see the clear face of a person here. This version has brown color and various shades of the same dominate the cover page.

Mitch Rapp‘s continued war on terror means he has created some rich and powerful enemies around the world. One such Saudi billionaire puts a bounty on his head. With the political support and through a middleman, he finds a pair of assassins who are willing to take the job for an enormous price tag.

The pair is ex-soldier Gould and his partner Claudia. They are clever and ruthless and they accept the job as their pathway to retirement. The pair travels to US and starts surveillance on Mitch.

We get glimpses of Mitch’s life as well as he executes another mission in Canada and continues his ongoing battle with bureaucracy. On the personal front, they find that his wife Anna is pregnant. One morning, Mitch comes face-to-face with the assassins in his own neighbourhood while on his running routine. He has also injured his knee and ends up in a surgery soon after. Gould takes advantage of this and booby traps the house to explode when Mitch and Anna are back from his surgery.

Things go a bit “not as planned” and the explosion kills Anna, but Mitch survives. While recuperating, he has no other thought but to kill everyone involved.

The people involved in an assassination plan panic once they find out that Mitch Rapp is not dead. Another attack is planned on the CIA safe house where Mitch is recuperating. This also fails and Mitch leaves USA on his hunt for revenge.

I have tried to give you the minimum of the storyline above to keep the spoilers at bay but it is quite a complex plot spanning over half the world and including many a complex characters. A lot of these characters have evolved through the series and so have a lot of background references and stories linked to them with a few new ones appearing for the first time. They all keep the reader interested as the author sketches the world of espionage, mercenary killings and political power games. Mitch Rapp’s tendency to work his own way and disregard for rules and bureaucracy is a recurring thing through the series and is on display here as well. So is the rhythm of his life where he keeps losing the women he loves.

The way most people see Mitch, is very neatly summarised below:

Guys like that need to be kept in a cage in the basement and the only time you let them out is when there’s a murderer in your house.

The author does sketch a lot of political scenes and gives us glimpses in the way politicians work. I like the way he describes politicians below:

All politicians believed in their personal power of persuasion. Everywhere they went, they shook hands, smiled, remembered an amazing number of names and convinced people through nothing more than their personality that they were likeable.

Such personalities also carry monumental egos and occasional blindness to their weaknesses. These usually lead to new conflicts or delay in the resolution of existing ones.

The book includes a number of passages on how civilisations rise and fall:

Great civilisations rose and fell as surely as the tides. The Egyptians, the Incas, the Mayans, the Greeks, the Persians, the Romans, the Mongol empire, the Ottoman empire, all came and went. The Austro-Hungarian empire, the French, the British, the Russians, and the Nazis would someday merit only a footnote. The Soviet Union has lasted less than a hundred years with their grand experiment of communism. A blink as far as history was concerned. If Abel had to guess, America’s pre-eminence on the world stage would last no more than another hundred years. The country had too many rights, too much wealth, too much selfishness and not enough sacrifice. The civilisations that had made their mark did so through brutality or great self-sacrifice by the populace, and often both.

Or when the writer comments on the slow slide of developed economies in a democratic environment:

A once-great civilisation sliding towards abyss. The masses wanted the state to provide for them in every way, and the politicians who promised the most largesse were the ones who were elected. They in turn gave people what they wanted, which then placed an ever-increasing burden on the most productive members of the society. This was democracy’s Achilles heel.

As this is the world of mercenaries and spies, there are some apt observations as to how this can be a game of just personal gains:

You shouldn’t trust me. I am a contract killer…an assassin. You act as if you are dealing with someone who should be virtuous.

Mitch takes a lot of beating – physical and mental – in this book and I quite like the following passages where the author captures the long term effects of living a life on the edge:

The mind controlled the body. It could tell muscles and joints to ignore all kinds of warning signals. The problem, though, was that those warning signs were there for a reason. If they were ignored for too long, the body eventually broke down.

A physical injury immobilises a person, whereas psychological trauma incapacitates by inflicting fear or taking away an individual’s desire to live. Separately, they are bad enough, but together they are almost always devastating.

The book is an action thriller ride that carries on to one adventure after another with lots of casualties along the way. It is a good picture of the modern-day world of spies and assassins and will make a good reading for all thriller lovers.