We met Aru Shah and her Pandava soul sisters in the first segment of this entertaining adventure fiction series.

At the end of the first book Aru Shah and the End of Time, we got a glimpse of the third Pandava sister briefly and so exploring their further journey, I had a chance to read the second book of the series, namely Aru Shah and the Song of Death.

As you can see blue and yellow colors dominate the cover page of Aru Shah and the Song of Death. 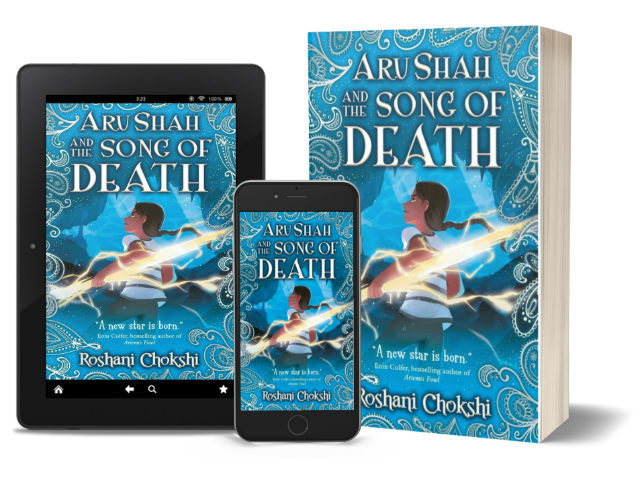 The illustration of the female protagonist looks interesting on the graffiti of various symbols. When you read the book you will understand what the glowing object in the center is alongwith its significance.

On the whole a moderately impressive cover page.

So it feels like Aru and Mini have just finished their first quest and are now getting some long due training in Otherworld from the Council of Guardians, when on a sleepy Saturday the bow and arrow of Kamadeva is stolen. Not only that the thief was a shapeshifter and stole these items while in form of Aru and their new soul sister Brynne.

Brynne is the daughter of Vayu, so the current re-incarnation of Bhima, loves to cook, is super strong and currently is super mad at Aru for the current troubles. The council of Guardians has a special meeting including Naga Queen Uloopi and her associate Takshaka who don’t believe that the Pandavas were not responsible for this theft. If the Pandavas cannot prove their innocence by finding the real thief and recovering the bow and arrow, then they will be exiled from the Otherworld, thus leaving the Sleeper and his associates complete freedom to bring chaos.

And so the next quest begins for Aru, Mini, Brynne and Aiden. Aiden has a special dispensation to join Pandava adventures along with his camera Shadowfax and we’ll find out later why 😊…

Why would someone still the bow and arrow of Kamadeva? Well, apparently this makes people Heartless and turn them into zombies, a very useful army indeed if you wanted to steal Amrita from the Kshirsagar.

The first step for Aru and the girls then is to survive zombie attacks and meet Kamadeva. From here they start their journey to the underwater Nagaloka. They meet the lord of the Seas – Varun and his wife Varuni, find some answers, some hidden treasures and some betrayals. Mini is taken by the secret keeper Naginis in return for the heart jewel for Uloopi.

The Pandavas go to Sage Durvasa for some help and some answers. With his advice, they travel to the land of Ratri to free their dear friend. Mini tells them that the bow and arrow were stolen by Surpanakha and the only way to revive the Heartless zombies would be to plunge the arrow of Kamadeva in Surpankha’s heart.

The Pandavas start their journey to the Kshirsagara, but their way is barred by none other than the God of Fire – Agni…

If they survive him, there are yet many monsters in their way, and time is a-ticking…Will the Pandavas have to face another exile…

As far as the storyline goes, the book remains a jumbo patchwork of the mishmash of legends and stories from Mahabharata and other Indian mythological stories.

The main attraction of the book still is the author’s light-hearted prose, snappy dialogues and humour. She takes her young charges through the normal pangs of awkward attraction to comfortable friendships, while showing us their fears, doubts and insecurities when it comes to their families. All of them have a need to belong somewhere and that’s essentially how they become a family with their Pandava souls.

Like the first book, the author keeps building this fantastic realm that exists along with the world as we know it, and she mimics some of our well-known bureaucratic bits as well, e.g. the bit below is a good reflection on how we travel:

Please take out all laptops, cellular devices, cursed items, and weapons of mild devastation. Bottled constellations or enchanted bodies of water must be kept in a three-ounce container. Please note that Samsung galaxies are now banned, as per the Otherworld Transportation Security Guidelines.

Although Aru and Mini have been on one quest and now practice with their divine weapons all the time, for Brynne and Aiden this is the beginning of the journey. And all four of them still are full of self-doubt. When you feel insecure, or doubt yourself, it is also very easy to doubt others and not open up to them. No wonder the first few encounters between the sisters are prickly:

No one can take your place if you make room for them. Trust yourself more than you distrust others.

Families weren’t like a box of standardised test taking number two pencils. Families were like a box of assorted color sharpie markers: different, kinda stinky (but not in a bad way), and permanent whether you liked it or not.

Sometimes, when things went wrong, it was easier to blame what was in her blood than to take responsibility.

The author does bring up the discussion about good and bad, white and black a few times in this book as well. As you know, Mahabharata is filled with shades of grey and here the author uses many stories, e.g. Eklavya’s story, to point out that sometimes good people do bad things and bad people do good things.

Although Pandavas are generally seen as the good guys, there were many who didn’t think so. Takshaka held a grudge against them for generations for burning up the Khandavprastha for one. Same goes for the Devas and Asuras. Devas acted less than honourably on many occasions and just having Asura blood in your veins did’’t make you a monster.

The Gods have no interest in protecting this world. Despite their immortality, despite their powers, the gods never keep their word.

So the author keeps the Pandava sisters going through repeated assessments of how they see the world and to try and see both sides of every story. There are a lot of characters in these old stories who appear to be treated unfairly, but what is fair?

Fairness is but an idea conceived by someone who has the power to make such pronouncements.

Just because something is not fair does not mean it is without reason or even compassion.

Fairness is a multifaceted gem. Its appearance can vary depending on the angle of the beholder.

And that every story can be told in many ways:

Stories lived a thousand lives. Many tales from around the world were similar. That didn’t make them unoriginal or bad, but rather proof that people cared about and were frightened of the same things no matter where they lived. Each culture put their own spin on the same universal story, keeping it alive in many different versions.

All young adults have to navigate the minefield of the world around them as they make their way into adulthood and Aru, Mini, Brynne and Aiden are the same, except that their journey is filled with quests for otherworldly treasures, fights with demons and monsters and filled with heavy responsibilities. In spite of all this, they do need to learn the fundamental truths about being human and keep optimistic in the dark times:

I have seen your nightmares. They are seeded with moments of doubt, watered with the pain of tears not shed, and pruned by the ghosts of paths not taken. But that does not make them true.

A person could use up material things, but it was harder to exhaust an idea. An idea was impossible to burn.

The book is generally well-written and well-published, except for occasional typographical errors, e.g.,

The author brings in a lot of popular culture references again like Aru’s fondness for “The Lord of the Rings”, her love for movies – Hollywood and Bollywood. There is a very “Moana” like sequence with a giant crab – probably because Disney are partners in this adventure.

All in all, an enjoyable adventure filled with fun and friendship…