Every religion has a treasure trove of stories that turn into myths and try to explain why the world is like it is today.

The story that we are picking up today tries to tell us how we ended up with so many different languages:

And the whole earth was of one language, and of one speech.

And it came to pass, as they journeyed from the east, that they found a plain in the land of Shinar; and they dwelt there.

And they said one to another, Go to, let us make brick, and burn them throughly. And they had brick for stone, and slime had they for morter.

And they said, Go to, let us build us a city and a tower, whose top may reach unto heaven; and let us make us a name, lest we be scattered abroad upon the face of the whole earth.

And the LORD came down to see the city and the tower, which the children of men builded.

And the LORD said, Behold, the people is one, and they have all one language; and this they begin to do: and now nothing will be restrained from them, which they have imagined to do.
Go to, let us go down, and there confound their language, that they may not understand one another’s speech.

So the LORD scattered them abroad from thence upon the face of all the earth: and they left off to build the city.

Therefore is the name of it called Babel; because the LORD did there confound the language of all the earth: and from thence did the LORD scatter them abroad upon the face of all the earth.
— Genesis 11:1–9[6]”

Yes, this is the story widely known as that of the “Tower of Babel“. A similar story appears in other cultures as well, e.g., Assyrian and it is debatable that Babel actually meant Babylon.

Recently, we came across author Roshani Chokshi who has taken this story and tried to build a fictional, magical world where the Babel fragments are sources of power – including that of creation – of going from nothing to something. So, let’s explore her book The Gilded Wolves on behalf of Team Thinkerviews. 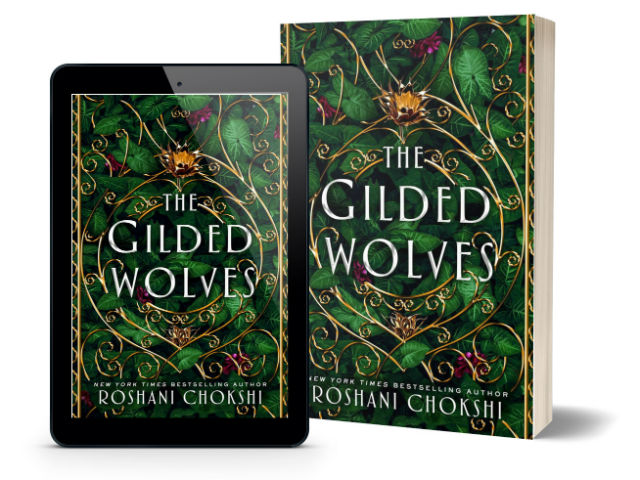 Featuring a complexly woven tapestry of motifs and gilded lines on a richly dark coloured background, the cover page is attractive enough for the browsers in the bookshop. Although, once you experience the richly magical world within, you do feel that the cover page could have been much better.

Once, there were four Houses of France.
Like all the other Houses within the Order of Babel, the French faction swore to safeguard the location of their Babel Fragment, the source of all Forging power.
Forging was a power of creation rivalled only by the work of God…

The four House of France are:

But mere mortals as the humans are, it appears the Houses failed in their duty. And the book opens with the matriarch of the house Kore losing her magical ring.

Soon we are at an auction in Paris of 1889, and we meet our lovable gang of rogues, as they try to steal an ancient Chinese compass that is fabled to have the map that will lead them to the location of the Babel fragment of the West. The gang consists of:
Séverin Montagnet-Alarie – Raised to be the heir of House Vanth, but denied his inheritance. Now he runs one of the most popular hotels in Paris and is surrounded by a family of sorts – his half brother Tristan, a gifted landscaper and a haunted soul, his love interest Laila, Zofia who is fondly called the phoenix, Enrique – historian and symbologist.

All of these people are dear to Severin. Together they make a brilliant team and have a reputation for acquiring precious objects that nobody else can. But when they steal the compass, the patriarch of House Nyx, Hypnos tracks them down and forces them to accept a near-impossible job in exchange for his silence.

The team does infiltrate the safe house of Kore and acquire the object, but not without great losses and difficulties. Tristan is captured by their enemies and Severin has only one object now ahead of him – to save his brother.

While they come up with a dangerous plan to get Tristan back, Severin and his friends are aware that someone has been ahead of them at every stage of the game….

Can they beat their rivals and regain what is lost?

The book picqued my interest because it is such an interesting mish-mash of cultures, set in Paris of 1889, which was time for revolution and is filled with enough magic and adventure. It is common in India to find books on British colonies as that has become part of our history, but France also had its share of colonising. We meet characters here who carry blood of their French fathers and their native mothers – Philipines, Algeria, Egypt and so many more.

They struggle with their identities, their skin colour, the life they have and the life they should have. Denounced by both worlds at times and not fitting in anywhere is an experience all too common no matter which century we live in:

“I live in two worlds. I cannot be both a descendent of Haitian slaves and the son of a French Aristocrat, even if that is what I hold in my heart. I had to choose, but even when you decide which world you will live in, the world may not always see you as you would wish. Sometimes it demands that you be so outrageous as to transcend your very skin. You can change your name. Your eye colour. Make yourself a myth and live within it, so that you belong to no one but yourself.

He felt like his own skin betrayed him. That his own dreams didn’t match his face and would therefore never come to pass.

The characters are adorable. And Indian readers have someone to connect to or not, as she is as enigmatic as her character in the book – Laila…born and died and put together with magic, she carries both physical and emotional scars of existence with a life span that is headed to a sure death very soon:

In India, those with forging affinity were called Jaadugars. The Jaadugars of Pondicherry were especially skilled in the obscure arts because they possessed an ancient book. This book held the secrets of Forging the likes of which rivalled the powers of the gods themselves.

The jaadugar her parents visited was skilled in crafting a new body from broken ones. When Laila’s parents had brought her – a stillborn child – he had used a chick from a swan’s nest, a trapped jungle cat and put her body together – teased out the consciousness and put it into a new vessel and Laila had been given nineteen years of existence…

While Laila’s beauty has a power of its own, Zofia is the mathematical, socially awkward one. Lost her place at university and found a place with Severin.

Tristan is the troubled one, Enrique the historic one, and then there is Severin, who looks after them all and so is bound to lose them and pay the price for their adventures.

The setting is exotic – not only Paris at the kerb of industrial revolution, but the rich set-ups of the Houses where mythology and symbols are rampant, where bloodlines are trailed back to the origins and the treasure troves are guarded by mythical beasts like Sphinxes. There is the quest for lost objects and caprices of humans that make every world a dangerous world to live in. Severin and Tristan may have magical powers, but their childhood was shunting around from one foster family to the other – no different than any orphan and no more protected and sheltered. They have all been set on this path and must follow it through.

All this may seem very serious, but the book is actually quite enjoyable. It has a lot of glamours and fun and light-hearted banter in spite of the dark forces in the background. The characters have gotten really good over the years at disguising themselves and do enjoy the charades while they play them:

When you are who they expect you to be, they never look too closely.

Enough power and influence makes anyone impossible to look away from.

Fashion, just like the universe, owes you neither explanation nor rationale.

As it is a quest, the book is filled with rich symbols, riddles, mathematical puzzles, anagrams and a lot of enjoyable puzzle solving.

People die for symbols. People have hope because of symbols. They’re not just lines. They’re histories, cultures, traditions, given shape.

But like every quest, loss dogs their every step forward, and at the end of this book we leave Laila estranged from her Majnun and another quest ahead of them that will take them to Russia. I listened to this book on Bolinda Borrowbox and quite enjoyed the experience, especially the French words and expressions and now look forward to the second book in the series “The Silvered Serpents” which is published in 2020.

All in all, if you like magical quests and adventures and are after something set in nineteenth century France, then give this book a go…