Sherlock Holmes remains one of the most well-known characters in the English reading world and there are countless authors who try to tell his adventures even today through series of novels. His character has been analysed for a century now and the analysts have attributed a lot of virtues as well as vices to him that the original stories didn’t talk about explicitly, e.g., his addiction to drugs or his mental health. The character has been so fascinating that even the modern readers of twenty first century love to get lost in the world of Sherlock Holmes.

He also is one of the most “filmed” characters – with multiple TV series and films and those adaptations are well loved around the world.

Some of these adaptations and continuations featuring Holmes are good and achieve success and some just fizz out and are buried under hundreds of other works of similar nature.

Author Nancy Springer put her own twist on the Holmes family and started writing adventures for the youngest member of this gifted family – a girl called Enola Holmes.

In my pursuit of books for young readers, I came across this series and thought I’ll give it a go. I found it interesting and so here are my thoughts on the first book in this series, The Case of the Missing Marquess, published in 2007:

Let us take a look at the cover page of original edition. 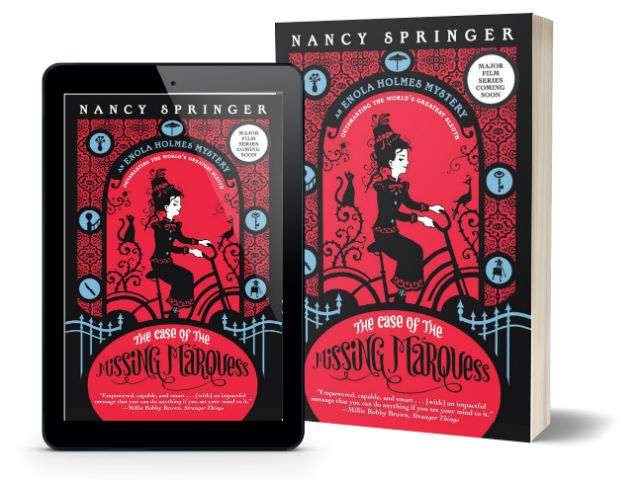 This cover page will remind you old European books. Seeing the female protagonist an earlier version of a popular vehicle will make you remember those old times. All the illustrations are done using black, red, turquoise blue and white colors. A minimalistic in that sense, the cover page holds many attributes.

Enola Holmes is fourteen years old and quite happy that she has got her birthday presents. She would have been happier though, if her mother would have given these presents to her in person.

By next morning, it is rather clear that lady Eudoria Vernet Holmes has gone missing. For Enola, she is practically the only family member, apart from a couple called Lane who work in and around the house. Enola initiates the search for her mother and telegrams her brothers Mycroft and Sherlock.

The brothers arrive in all haste and are very surprised to see the sister they have not seen for the last ten years. You see, Mycroft has been sending money to their mother so Enola can have governesses and get an education to be a “proper lady”. What they find is a wild child of fourteen who is more interested in riding her bicycle and finding bird nests. Enola certainly has no inclination to be a “corsetted” lady.

They clash a little and eventually Enola figures out that she needs to getaway. She starts deciphering the codes her mother left in her parting gift and after a few weeks, escapes her family home of Ferndale Hall.

Her plan is to escape to London, live as a widow and look for her mother. But as luck would have it, on her way to the train station, she comes across a mystery – the marquess of Basillwither has gone missing.

After all, detecting is in her blood. She goes looking for Lord Tewksbury and finds herself on an adventure she could never have imagined…

The biggest difference about contemporary and historical writing is of course perspective. When Sir Arthur Conan Doyle was writing about the London of his time, he didn’t see anything amiss, neither did he see anything that was outside his realm.

While here, the author has the advantage of looking back a hundred years and seeing the injustice and stigma of the way Victorians expected women to behave. There is a strong female-oriented narrative here that talks about Eudoria Holmes being a supporter of voting rights for women and sending her daughter to a common school rather than giving her education at home. 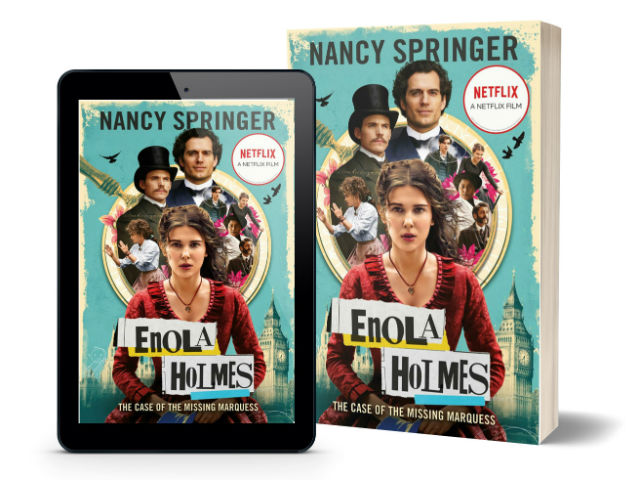 But Enola and Eudoria are also clever enough to turn the limitations into advantages. For example, the elaborate dressing requirements are great to hide their money and belongings and also are much more suitable to disguise themselves. If a woman is expected to wear a veil, she can also hide behind it. The author makes Enola warm and funny and brave, but also nothing like seemingly superhuman observation powers of her brother Sherlock. As Enola herself counts her accomplishments:

I formed a mental list of myy own accomplishments: able to read, write and do sums; find birds’ nests; dig worms and catch fish; and ride a bicycle.

She has read a lot and has that critical tone for self and others that modern readers would love:

While I wanted to believe that I would somehow persevere after my corporeal body was gone, I imagine that if it were so, I would have better things to do than to knock on furniture, ring bells, and shake tables.

She is an excellent hand at making caricatures and likes to make lists of questions. I liked the way she finds a title for what she wants to do:

Perditorian – from the Latin perditus, meaning “lost”. Perditorian is the one who divines that which is lost.

The hindsight and perspective also apply to the setting. Although the London of original Sherlock Holmes’ stories was also a metropolis filled with poverty and smog and Dr. Watson called it a “cesspool”, it was still a man’s world mostly. Here, the author takes us through the docks and slums and shows us how old and weak had to survive here by crawling through their existence.

While in her country house, Enola thought of this city filled with palaces and light and lustre, while the reality is slightly more diverse:

All around me towered a man-made wilderness, buildings taller and more forbidding than any trees ever were. It was a grotesque brick-and-stone parody of any world I had ever known? with so many chimney-pots and roof-peaks looming dark against a lurid, vaporous orange sky? Lead coloured clouds hung low while the setting sun oozed molten light between them; the Gothic towers of the city stood festive yet foreboding against that glowering sky, like candles on the Devil’s birthday cake.

The book is quite enjoyable as it skims over a lot of concepts – ciphers, language of flowers, etc. – and essentially sets the stage where Enola finds a place for herslef in the big, wide, world.

Although some of her actions are driven by slight misunderstanding of how older people – especially her brother Sherlock – speak about things, the contemporary readers would recognise her thirst to be her own person and carve her own path.

If you like young adventurers, then give this book a go. It is a short read and will take only a few hours. I am quite looking forward to the next segment and see how Enola grows up….