Home / Books / 8: The Game is On By Swapnil Khamkar | Book Review

Sometimes your book library becomes so big and “books to be read” queue becomes so long that despite your genuine intention to read them, some of them took very long for their turn. Same is happened in the case of 8: The Game is On By Swapnil Khamkar.

Recently, from our team, I got a chance to read it and I found it a comparatively good thriller where masala of a movie is infused.

Here are my unbiased views and reviews for the same.

Let us start with the cover page. Being a key to the portal (remembering any Sci-Fi, when reading these words?), the book cover plays a significant role in a potential reader’s reading and/or purchase decisions for sure. 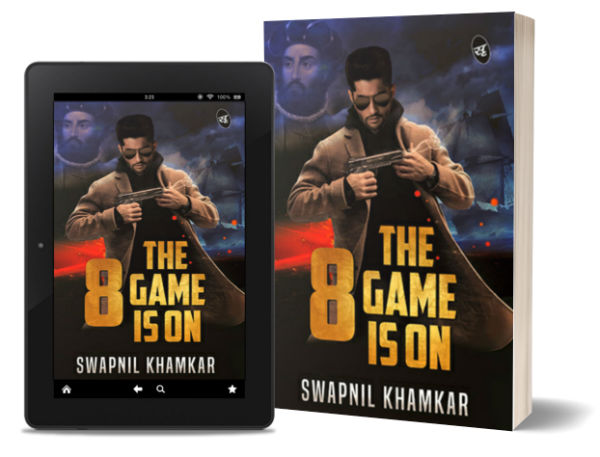 8: The Game is On By Swapnil Khamkar | Book Cover

The cover page shows the protagonist wearing black goggles and an overcoat having a gun in his hand (in the story, however, he doesn’t need to do that). While the illustration of Vasco-Da-Gama and a ship are important elements of the story, they don’t look much attractive. It seems the cover page is designed by the author (or a designer friend) who had minimum resources at hand and open-source images to use. The cover page is not very disappointing either. But, the story is quite good and a better cover page could have made a huge impact on book-selling for sure.

Overall, a moderately good cover page which could have been better.

Let us take a bird’s eye view of the story explored in the book.

The story starts off interestingly. The world of movies and filmstars (or people associated with the film business) fascinates the public in general. It was a rainy night when a popular film director Akash Gupta is found hanging in his home. Is it a suicide or a murder?

To solve the mystery the authorities have called in Neel, an officer who is unhappy with the system and has offered his resignation (not accepted). He was accompanied by his best friend Jay and Avantika, both brave and excellent officers from the department. Neel was not okay with the decision of the department to include Avantika in his team (and so does Avantika to be included in a team with Neel). Well, Avantika also has resigned from the department (and her resignation is also not accepted yet!).

At the same time, another mysterious case of a robbery challenged the same team. It seemed that a ship carrying 2000 artifacts was mysteriously sabotaged and some important artifacts from the same are looted. Those artifacts are linked to Vasco-Da-Gama, the first Portuguese sea-voyager who successfully reached India, and played an important role in changing the history of the country.

Is there a link between both the cases? Why someone was interested in looting some older artifacts? Will the team able to solve the mysteries?

The book tries to follow the path of a thriller where modern-day fellows trying to chase the things linked with the history, in the very similar way you see in various popular thrillers by Dan Brown, Ashwin Sanghi, Christopher C. Doyle and others.

The book has chosen two interesting plots to explore in this thriller 1) A Murder Of Someone associated with Film Industry 2)A worldwide trail of events to find historical artifacts hidden in plain sight.

The relations between Neel, Avantika, Jay and Raghu works in favor of the story till there is a patch-up between Neel and Avantika. It becomes a tour for them where they have some good time together also. Now, this segment is tricky, some find it as a diverting track in this otherwise good thriller. I found it so.

The author is good at exploring scenes. Sometimes the details are so interestingly written that you may remember Sherlock Holmes or Poirot’s cases.

The author is good at exploring emotions without getting melodramatic. I consider it as a positive aspect of the book. Here is an example:

… Jay had a cute smile on his face. Neel and Avantika had stuck their heads out of their respective windows, though none of them saw what was outside the car …

It is one of the rare books where the work of diplomats is acknowledged and appreciated. I like it for this gesture.

… I am happy we have a vast network of diplomats working all over the world. Working for our country in another nation is not easy I see. Thank you. …

The book has its own dose of romance. The good thing is, it never goes into adultery mode. We have seen that many authors, including some popular ones, include adulteries and titillating content in order to sell more copies of the book. Here are some interesting lines from the book about love:

It is no need to say that I love you, but sometimes it becomes necessary …

The night was dark and the love was bright. The moon and the stars glowed and so did their souls.

The book touches the psyche of white-collar criminals who are otherwise intelligent, creative and intellectual; but has rigid and firm beliefs in wrong things.

I think that if someone hates what history says and intends to change the perspective, then the person must make it popular among the people. To prove that history was wrong. And this can be done by evil means. …

The plot of the book is set up in such a way that the story takes you through many places including Oman, Muscat, Lisbon, Cairo, Malindi, Vasco Da Gama, Madayi Calicut (Kozhikode), Kappad, …

I’ve read the kindle edition of the book which we’ve bought during a promotion, so in terms of value for money, this book is a good deal for us.

While reading the Ebook, I found that sometimes the font size is changed resulting into inconsistency. The book has its share of proofreading errors, mainly unwanted line breaks and/or having misplaced whitespaces. Here are some examples:

… An armed offi cer was standing outside the lab…

… He closed his eyes and touched them with his fi ngers.

… said Rakesh when they came
out of the office. …

… Neel told Avantika and Jay to fi nalize the destinations they wanted to visit.

… I have made a film on a real robbery and a real
artefact hunt,…

The sky was dark. There wasn’t a single twinkling star. Not a single person had the guts to look up at the open sky.
The house turned into a ghost house that night.

The quotes from the book will definitely give you an idea of the quality of writing you can expect from the book. I’ve tried to pick only spoiler-free stuff.

The story is set up in an intersting arena and it is an interesting thriller (especially the earlier part of the book and the climax) which could have been better. Some parts of the book fail to make an emotional link with the reader. Overall, a thriller which you will enjoy reading.

Previous: An Interview With Rohit Sharma – The Author – Our Love Story
Next: I’m So Hacked By Gautam Mayekar | Book Review