Released on June 4, 2001 Swordfish is an action, crime thriller which is focused on Hacking. The movie have a lot of points which will make you enjoy it as a thriller without a doubt. But it is not a master piece.

It is worth to note that when the movie was released it was in talks because of the topless scene of Halle Berry. It is however look forced into the film. It doesn’t affect the story at all even if it is removed. There are many other things in the movie which are worth talking about.

The movie was filmed with an alternate ending also, which is available in some DVD versions. The official ending of the movie looks a little superficial and hence unbelievable (or unrealistic) to us.

The movie starts with a different scene (which is important but better to be seen rather than talked about, so we skip it) but actual story starts from the flashback scenes. It was 4 days before the current incident happened. We see Stanley Jobson, a hacker is having a bad time. He tricked FBI system by infecting it with virus and get caught for the same. He was sentenced for two years and the condition for his parole is to keep himself away from the computers. It cost him a lot at personal end also. His only daughter was now in custody of his (now) ex-wife. She also got a restraining order against Stanley which prevent him from seeing his daughter Holly.

In this tough times, Stanley was approached by Ginger who offers him to solicit his hacking skills for her boss – Gabriel. Stanley was rock solid on his decision to not to break any rules, but as he is running out of money he is about to lose her daughter’s custody forever. He don’t have money to hire a good lawyer too! It was made him to take a chance to meet Gabriel. Meeting Gabriel made his life more complicated. The rest of the movie is a good thriller then after. 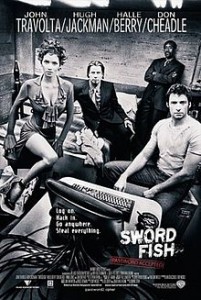 The chasing sequence in the beginning of the movie is worth to watch. As mentioned earlier, the climax shot (on the rooftop of the building) is thrilling ,but the conclusion about the scene given later, looks a little forced.

Hugh Jackman plays his role with sincerity and his hard work is evidently visible on screen. Halle Berry remains faithful to her role. The charisma expected from John Travolta (which is needed for this role) is somehow missing. It is not that he is not convincing but we definitely expected much more. The story has its ups and downs. From the point of view of audience, it is a good thriller though.

The cinematography of the movie is good. Same we can say for the background music. Casting director choose right people for right roles as the matter of fact. The title could have been something different to match the story.

The “hack in 60 seconds” challenge by Gabriel to Stanley – as his (kind of) entrance test is good but it could have been a lot better. The audience should have been convinced the Stanley got to break it. It is unable to create the thrill which emotionally attach the viewers with the film. Also, if you find some of the traces of James Bond films at various places.

Our verdict: It is a good film which you will enjoy in segments if you love action crime thrillers.

Are your curious to watch the movie or did you already watch the movie? What are your thoughts about the movie? Do you like to say anything related to the movie or this review? We always love to read your genuine remarks. And yes, do not forget to share this article with your friends over various social networks via Twitter, Facebook, Google Plus and others. And yes, you may like to subscribe to our RSS feeds and follow us on various Social networks to get latest updates for the site to land right in your mail box.