The second episode of Agatha Christie’s Poirot (English TV Serial, which was aired in Briton), is titled as Murder in the Mews. It revolves around a murder which happened so mysteriously that at first glance it looks like a suicide. TV Serial : Agatha Christie’s Poirot Season : Season 1 Episode # : 2 Episode Title : Murder in the ... END_OF_DOCUMENT_TOKEN_TO_BE_REPLACED

First episode of the Season 1 of English TV Series Agatha Christie’s Poirot is titled as The Adventure of the Clapham Cook. The episode also serve the purpose of introducing us to the main characters, but it doesn’t waste time in doing so. It rather start in Poirot’s office. And it gives us the hint of the pace we can ... END_OF_DOCUMENT_TOKEN_TO_BE_REPLACED 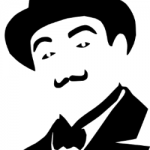 Agatha Christie is known as Queen Of Crime (fictional thrillers). The books and short stories she wrote are loved by people incredibly and they are all so popular. She have created various fictional characters including Hercule Poirot and Miss Marple amongst the others. Hercule Poirot is a Belgian detective who works on various cases and resolve them. A TV Serial ... END_OF_DOCUMENT_TOKEN_TO_BE_REPLACED