A while ago we found various books by popular Hindi author, Surendra Mohan Pathak (aka Surender Mohan Pathak) at very attractive prices. Conman is one of them.

It is worth to note that it is 299th book by Mr. Pathak. Actually, Mr. Pathak’s reader showered love and affection on a book featuring Sunil (a reporter) as a protagonist. It motivated the author in writing a number of books in the series. This book is 112nd book in “Sunil series”!

This book is published after the author has published the first installment of his biography “Na Koi Bairi Na Begana” and thus Mr. Pathak grabs an opportunity to share some interaction with the readers in the context of it. If you are a fan of his books, you shouldn’t miss the opportunity to read it.

The book explores a fictional tale and thus the cover page can be considered as a gateway to a fictional world explored within. 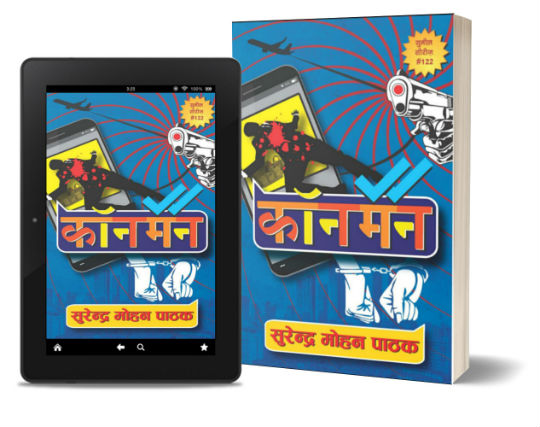 As you can see, various shades of blue dominates the cover page along with red and yellow. A young fellow is seen fired multiple times and had blood spots all over his body, a pistol is seen in action. A pair of handcuffed hands and a mobile phone are illustrated along with. The cons of the conman are represented using red waves. The cover page is like a movie poster where almost all the elements of the story are tried to put together.

The same cover page is used on the English and Hindi versions of the book (yes, the book has English version also, and we are planning to read it and share our views about the same with you all :)).

Once upon a time, a handsome and dashing young fellow returned from a foreign country meets a beautiful young girl and they fall in love. The young fellow turned out to be a wealthy person. He treats the girl with the utmost chivalry and wants to settle down with her. He is fed up from staying in a foreign land and wanted to come back to his homeland.

He soon goes back and started winding up things. He sent a container of goods from there and informs his girlfriend about the same. Soon she got a call from the custom department that the duty paid for the contains falls a little short and more payment is required. Well, the container is worth crores of rupees (as per the declared value). She was followed up by her lover about the same. He informed her that he has closed his accounts and is having just the essential stuff and money for the return ticket and travel expenses. All his wealth is also encashed. So the girl agreed to pay the remaining custom duty, as after all the container is to be hers and they will be marrying soon.

She eventually transferred the money to the customs department’s account (as per instructions).

There is a murder happened in a hotel and Sunil Chakravarti, the chief reporter of “Blast” a daily reported the same. While exploring the incident and its backdrop, he came to know about something fishy.

There are many other tracks going on and we meet Ramakant Malhotra, Kavya, Toral Mehta, Devina, police officers, Yogita Khatri, Prahlad Ram, Baldevraj Malik, Jitendra, Prabhudyal, hotel management team, and many other characters.

Why the story is named as “Conman”? How all the tracks talked about are linked with each other? Well, you need to read this “masala” thriller to know more.

As said earlier, the author talks about his biography (first installment) and readers’ reactions towards the same, the readers who love reading Mr. Pathak’s books will surely consider it as a small bonus.

Also, the lovers of “Sunil series” already know a lot about him, Ramakant, their relations and contacts in the police department and much more. 122nd installment in a book series is proof of how warmly it is welcomed and loved by the readers. The protagonist, being a reporter in a national daily, having detective like attitude to uncover crimes and reach to the truth, will remind you many Hindi films/TV Series for sure.

Many Hindi films, TV Series and other media often show the tragic backstory of the criminal and sympathize with him. Often, such protagonists follow the wrong line and still get appreciated by the public as a rebel. Mr. Pathak, through a character, gives an important message. That is to do (and insist others to do) the right things and follow the right path. Of course, the protagonist does some mischievous things and while following his “practical” ways, bends some rules, he doesn’t break them though.

The book has many fantastic conversations that include wisdom, life-lessons, fun-moments, satires, thrills and more… Here are some of them:

The story of the book revolves around various places in the city including Hotel Starlight. All the characters in the book got enough footage. In fact, the hotel itself is explored like a character. In a thriller, it is important that all the surroundings and places quite effectively. The minute details make the reader feel like watching the things happening right in front of him/her.

There are some interesting conversations between various characters that you will surely enjoy. Of course, some of them are already talked earlier. The book has some fantastic oneliners that you will enjoy reading.

The Kindle E-Book version has some spelling mistakes, for example, डेमसेल is written as डेस्सेल, Shakespeare is written as विलियम शेख्सपीयर.

I found the following line quite interesting:

The book has some conversations taken right from real life.:

The story also refers to some modern life-style elements. It is also a reminder of how some smart fellows use their persona to con emotional people. One needs to be vigilante before trusting an unknown person. The struggle a dedicated reporter or an honest police offer goes through during their job is something ignored by people, based on common perception. This book explores it quite positively.

I like the way the story progresses. Twists and turns come periodically and the suspicion shift from one character to the other. Actually, the book has a large number of grey characters. And, that makes them real and believable. It is hard to find a completely black (and even harder)/white characters in real life. The book also talks about some orthodox perceptions the society at large believe in.

If you love reading books by Mr. Pathak (or typical masala books where various entertainment elements are weaved together), you will enjoy reading this thriller too.