A flood of books are hitting the bookstores almost at a regular interval, and not all of them are worth your time and money right? That is the reasons people often go for genuine an unbiased reviews of the book which summarizes the positives and letdowns in the book before making a purchase decision. Recently I got a chance to read an interesting book named When The Chief Fell In Love by Tuhin A. Sinha. And here are my unbiased views and reviews for the same.

The title of the book is intriguing yet confusing. You may not get the idea of what to expect from the book, apart from the assumption that it is surely a love story. It is indeed. But, it is much more than that. 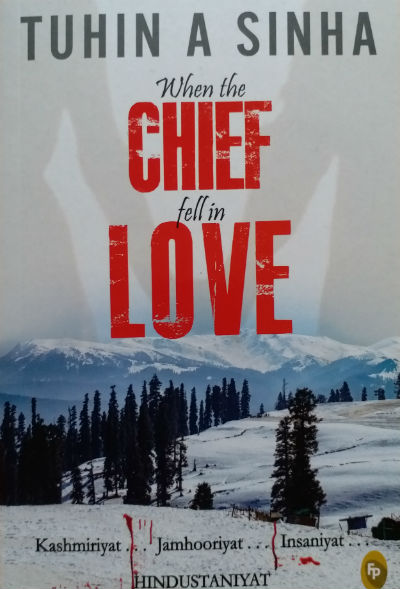 Let us start with the cover page of the book. Having a background exploring the ethereal beauty of snow clad mountains with some trees showing their presence, and the book title in quite a contrast – red and black – colors; is quite interesting. And when you see the slogan written below the title, “Kashmiriyat, Jmhooriyat, Insaniyat… Hindustaniyat”, you will remember Atal Bihari Bajpai, the then prime minister of India, who gave this slogan; if you follow Indian politics, especially in Kashmir perspective.

You can read this Huffingtonpost article to know more about it.
https://www.huffingtonpost.in/bhanu-dhamija/kashmiriyat-jamhooriyat-insaniyat-making-a-strategy-out-of_a_21474623/

We can give 4 out of 5 stars to the book cover for sure.

Let us take a bird’s eye view of the plot of the book. I will definitely try to keep as many spoilers as possible at the bay, but please be warned that some of them are inevitable and thus may found in this review.

The book is actually distributed into 8 segments from which the main story is in 4 segments.

Vihaan Shashtri is a young boy from a middle-class family of Banaras. His father is a professor and his mother is a homemaker. Grown up in a traditional middle-class family environment, Vihaan, had a fire within to achieve more and do something remarkable in life which leads him to the Hindu University, Delhi.

Zaira Bhat is a young and enthusiastic girl from Kashmir. She is an emotional and strong person who is a poet. Her father is a Kashmiri and mother is British. They are bound by lover marriage and stays at Srinagar. Bilal Bhat, Zaira’s father is modern in his thoughts, and he openly rejects the ideology of the separatists. Thus, he sent Zaria to complete her further studies from the peaceful environment of Delhi.

It was however not all peaceful there as well. The assassination of Rajiv Gandhi, the former prime minister of India and many other political incidents lead to unrest in the country. The situation of Kashmir however gone from good to bad and then the worst, compared to the rest of the country.

Needless to say that Vihaan and Zaira fall in the love.

Which turn their love story take? No, there will not be Hindu-Muslim divide stopping them from United? Will theirs be a happy, living together, loving each-other ever after love story? Well, you need to read the book to explore it.

This is a book written in the backdrop of the Kashmir unrest issue. The author makes a brave attempt to talk about a much required but less talked issue. The author should be appreciated for the same. Whatever author’s political views or likes/dislikes are the different thing and so does, whether the solution he approached seems a quite filmy or fascinating or even if you dislike it. While we can appreciate the books written on similar aspects in the backdrop of other countries, and consider ourselves quite “forward” and “liberal”, we often do injustice by neglecting similar things done on our own soil. Not sure, but often we consider it to be considered supporters or opponents of a specific political party or ideology, and not to discuss it.

The book definitely not a masterpiece and it has its own highs and lows.

The story starts in 2006 then the things are explored from the backdrop of 1990 via a flashback. The story moves ahead in the linear direction from that point and even moves ahead in the future! The book also has an excerpt of the fictional book published by the male protagonist in year 2030! The book is named “Resurgent paradise” and the excerpt is 15 pages long which concludes the story.

If you read the book as a love story you can find it a fragile love story. The chances are there that you will find the female protagonist’s character a quite confusing. But, that is how it is meant to be. Both the main characters are strongly built though. The author didn’t try to make the characters black or white and rather he had shown grey shades in almost each of them. That makes the characters more real.

The beauty of Kashmir is quite nicely explored. The shikara scenes are quite nice. You will enjoy the trip to Taj Mahal and if you are a college going (or recently completed your studies) youth you will find the college and hostel scenes quite interesting.

The protagonist’s visit to the innermost areas of the state of Jammu and Kashmir is something worth reading. Actually, I found the 4th segment of the book is the most interesting and gripping. It is the best part of the book I can say. If that segment was not there in the book, I could have given the book 2 to 2.5 stars out of 5.

If you follow the Indian politics, you can find the shades of many living or dead persons in the characters of the book. The author doesn’t shy away to name some places, people, terror groups, neighbor countries and political incidents.

The author takes care of matching dates of various Hindi movies released during 1990 and 1991, though, I don’t understand how the female lead of a movie released in the first week of February 1991 is considered as a favorite crush of college guys for valentine day of 1991. The author refers phrases like “cousin brother” like many other Indian authors.

While reading the book, you come across various interesting lines. Here is one of the straight-forward reference to getting the needed information.

take stock of the situation (page 8)

Only a person who did his research well can come up with such professional lines.

There are various lines which could have been written in better ways. Eg:

The place suddenly becomes intensely vibrant, what with students soaking in the winter sun and chirping all around.

I like this about the friendship in the book:

Not for nothing was he my best buddy!

Here are some other interesting lines from the book:

…faking a confidence I didn’t feel.
— — — —
To know me, even a lifetime may fall short.
— — — —
But I’m sure, a boring city is better than a violent city.
— — — —
I had often observed that social and political differences breed problems in a person’s personal space as well.
— — — —
Karmic connections, after all, never leave you easily.
— — — —
In the crowd of about 150-odd people that had gathered in the hall, it was his presence that I was seeking and his absence made me feel acutely lonely.
— — — —
In the silence that punctuated our conversation,…
— — — —
You know Zaira, in today’s world, it’s men who are the weaker sex. … It was emotional blackmail, every which way you look at it.
— — — —
I am not the ‘affair’ types. I end up falling in love.
— — — —
When you’re around, nothing else is more important.
— — — —
In a democracy, politicians are the only people who can actually bring change. The others – bureaucrats, journalists, and the common people, they can only take that change forward, they cannot really initiate the change.
— — — —
You keep crossing paths with your karmic partner.
— — — —
That’s life. You don’t know what the next chapter is going to be.
— — — —
But the problem with news channels these days is that they act like eagles hunting for prey.
— — — —
The usual stream of visitors was conspicuous by its absence.
— — — —
… being seen together won’t let us be together…
— — — —
No amount of research or official meetings could give one a glimpse of the truth on the ground.
— — — —
Only your personal life can be planned,…The personal bits are all impulsive.

There are some witty lines presenting sarcasm/witty humor in the book. I like this line:

Thankfully, one didn’t have to furnish an Aadhar card for verification in those days.

If you read the acknowledge section you can find author’s pain and sarcasm both when he talks about his first book as most successful and most read and it is the one for which a large amount of pirated copies are read.

There are some interesting poems in the book, and the author gives the due credit to the original creator of the same.

The way the love story begins might remind you some old Hindi movies. The author himself goes ahead and explains the “stalking” and how it was different those days from what it is meant today. In fact, the readers who love old Hindi films and watched some of the hit films of 80s and 90s will find some interesting references in the book they can easily relate to.

The book title is not self-explanatory. It may confuse the reader about what to expect from the book. Though, it is justified in the epilogue. Also, there is some adult material which could have been avoided or written differently. The pace of the book also fluctuates at various places. And, at places, you feel you are going through tragic love stories, and you may not want to continue. Some of the characters like Tia, never actually come into action, but, makes its presence felt.

Overall a book with its own highs and lows. The initial segment leads you to just another college love story, but, it is the last segment of the main story which has the potential. Definitely an interesting read.