Until the Music Stops by Naimish Srivastava | Book Review

Posted by: Editor February 22, 2021 in Books, English Leave a comment

At team Thinkerviews, we get attracted and exposed to books from almost all genres as various book lovers have different tastes. Although we are not big fans of horror or psychological crime genre, we occasionally receive these books from authors we digitally connect with and we have reviewed some such works here:
When the Devil Whispers By Ajinkya Bhasme.

Recently, we read author Naimish Srivastava’s book Until the Music Stops. Naimish Srivastava enjoys reading as well as writing about the dark side of human nature. We thank the author for providing us a copy of his book and here are my thoughts on it.

First published by Bigfoot Publications in 2020, this book comes in small paperback format. The coverpage is dark with the book name written in white letters and a splash of red. The design reminded me strongly of book cover for “Natasha Mehra Must Die”. 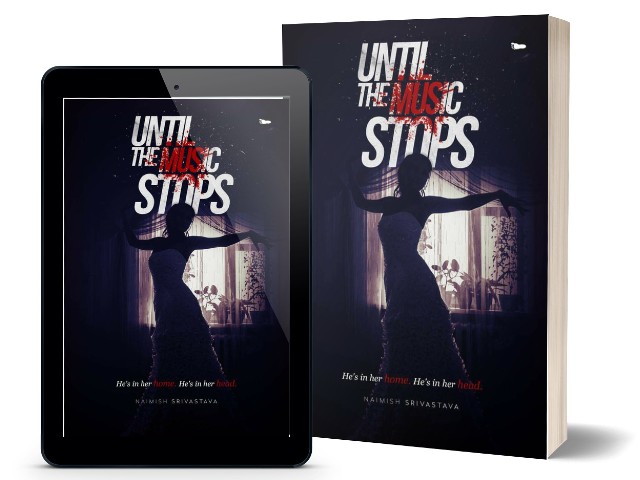 Until the Music Stops by Naimish Srivastava | Book Cover

Further down the page is image of a woman clad in a western gown type dress, her silhoute visible in the light from the window behind. The woman appears to be pushing the curtains out, but the light in the window doesn’t do much to illuminate the darkness around it.
The tagline reads ‘He’s in her home. He’s in her head.’ Adequately scary and creepy…

It is a reunion party in Grace and Siddharth’s home and everyone is having a great time reminiscing about old days and old feuds. Except Amir Malik, who has always had crazy crush on Grace – crazy being the operative word – and time has done nothing to reduce his obsession with her.

The party ends on a sour note and from next morning, Grace’s life goes awry. She continuously feels that someone is watching her. Strange things are happening in her house and around her. She is panicking and getting more worried about her daughter Refali’s safety as well as her own.
Unfortunately, Siddharth is busy at work and can’t spend much time at home leaving Grace to go through her days mostly on her own.

In a parallel thread, we learn about Grace and Siddharth’s college days, their romance and how Amir was a part of her life then. We also learn about her troubled existence at home, including an abusive uncle.

Things come to a head when Amir injures Siddharth and kidnaps Grace. Some of the missing memories finally come back to her, but will they help her put the past behind her?

Although on the surface this sounds like any other psychological crime thriller, the author makes it interesting by using two parallel threads as things are revealed layer by layer. Grace’s timelines and memories are so muddled that even by the end, the reader is not entirely sure as to which of her memories are true reflections of events that actually happened.

Grace’s is the most complex character and she behaves quite incoherently at times, until we learn of her mental illnesses and how that came about. Even when she accepts her mental illness, she doesn’t have much luck getting medical help and eventually she turns her anguish into murderous and revengeful actions. Amir also had abusive childhood and ended up with intimacy and connecting issues. He finds a connection with Grace and then is never able to let go.

Siddharth‘s character gets a bit sketchy here and there as he never seems to grasp Grace’s problems at home in spite of his own troubled life at home. For a couple living in modern times, Grace and Siddharth don’t seem to have much communication and connection with their friends on ongoing basis, in spite of their good rapport in parties and such.

The author uses a lot of overt descriptions about Grace’s body and there are many sexual encounters here, including violent and abusive ones. So, the book is definitely not for young readers or those who do not like to read about sexual violence and domestic abuse. The scenarios that play out in Grace’s head are also not for the faint hearted. She is always braced for trouble:

She waited for a disaster because it took away the element of surprise.

The book is generally error free, except for occasional ones like below:
Page 79:
Yes. What going on?
This should be:
Yes. What’s going on?

The book ends with a strange twist and doesn’t support the saying ‘Crime doesn’t pay’, as the characters seem to get away for their crimes…

If you are looking for a story that displays the darkness residing within human minds and how human brain reacts to trauma and abuse, then this is the story for you.

The New Rules of Business By Rajesh Srivastava | Book Review

Previous: Be Careful What You Wish For by Laura Wellington | Book Review
Next: Doomsday of Tamas: Race To The Second Apocalypse By Varun Sayal | Book Review