When I was studying in high school, Sanskrit was one of the school subjects. It exposed me to various ancient Indian literature. We used to have chapters from a number of masterpieces by various authors like Magh (or Magaha), Kalidas (or Kalidasa), Bhas (or Bhasa)… Swapnavasavadattam was one such masterpiece we got a chance to read a chapter from it as part of our course.

What reminded me of it now?

Well, recently I got a chance to read Udayan: The forgotten Pandava published by Leadstart Publishing. The book is originally written by Rajendra Kher in Marathi, the English version we are talking about here is translated by Prashant Talinkar.

If you look at the chronology Udayan was descendent of Pandava. Here is the lineage.
>> Pandu >> Arjuna >> Abhimanyu >> Parikshit >> Janmejay >> Shatanik >> Sahasranik >> Udayan

It is said that Gunadhya wrote around 7 lakh verses and named them Brihatkatha. It was written in the Paishachi language. The story was so mesmerizing that even birds and animals used to come to hear and they were absorbed by the story so much that they even forget to eat and drink! In order to preserve and spread this masterpiece, Gunadhya was suggested to meet a king and document it and spread it well. He then sends two of his disciples to meet King Saatvahan for the same. The king didn’t pay much attention to the story, especially because it was written in Paishachi language and dishearted disciples returned to Gunadhya.

Gunadhya, in the rage and disappointment, lit a fire in the jungle at the top of the mountain and started burning the verses of Bruhatkatha by reading them aloud. It brought animals and birds from the jungle to hear the story. The news reached the king in an unusual way. After knowing the power of the story, the king realized his mistake and went to the mountain top where the fire was lit. He apologized to Gunadhya and asked him to stop burning the story. He was ready to do everything he can to fulfill Gunadhya’s wishes. The damage, however, was already done. From the 7 lakh verses, 6 lakh verses were already burnt! Remaining 1 lakh verses were then preserved.

The original Bruhatkatha was in Paishachi and no authentic version is available, nor the language is known these days, as far as I know. So, whatever is available from the same is in the form of two Sankrit books mentioned above.

The power of those Sanskrit translations is evident in the fact that various respected Sanskrit poets inspired to write plays, poetries, poems and stories from the incidents explored in the same.

The story of Udayan, Vasavadatta, Padmavati, Yugandharayan, Pradyot, Vasantak, and Ghoshvati veena is explored in Bruhatkatha – and is told in this book by Rajendra Kher.

The protagonist of the book “Udayan” was a fantastic warrior and a legendary Veena player. The story explores his love stories and battles both. Whenever Arjun (aka Arjuna) is referred, it is obvious to imagine a figure having his arrows and bow. They were kind of extensions to his body. Being descendant to Arjuna it is obvious to have a similar imagination for Udayan too. 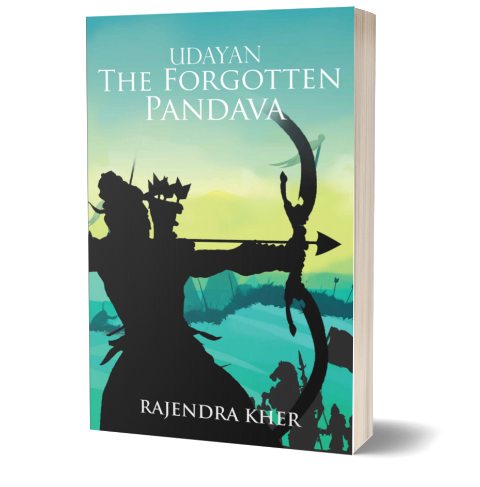 As you can see, the book cover has an illustration of a warrior standing in a striking pose with his arrow loaded on his bow. The black illustration of the warrior prince the front and the green, blue and yellow illustrations of a natural scene in the background makes it eye-catching. The colors are soft to the eyes.

It is not super attractive nor it uses cheerful colors, it is simple and decent though.

As said earlier, very few readers are familiar with Brihatkatha (especially when you compare it with those who know about Ramayana and Mahabharata), and thus the story of Udayan. For those, who already know the story, it is kind of retelling.

Udayan, the crown prince of Vatsa kingdom is already the king now, as his parents King Sahasranik and his queen both have renounced their lives. As per the tradition in ancient India, the life is divided into four segments 1) Brhmacharyashram (to learn and get ready for the life) 2)Grihashthashram (to enjoy the life and do the best for yourself and follow your passions, of course by doing better things for the others too) 3)Vanprashthashram (to handover the baton to the next generation and do more of the social work and provide guidelines to the next generation) 4) Sanyasthashram (to gradually detach yourself from material stuff and releasing emotional bondages, getting ready for the ultimate truth – the death). And, the king and queen have realized that it is their time to handover the baton to – Udayan.

Udayan was a fantastic warrior and is a ferocious warrior. He is exceptionally good with bow-and-arrows as well as swords. The problem, however, was his lack of love and enthusiasm for battles and even administration of the kingdom.

Yugandharyan – the chief minister of the kingdom is administering the kingdom almost single-handedly. The boundaries of the kingdom shrunk gradually and emperor Sahasranik’s sone Udayan no longer enjoys the status of an “emperor”, he was reduced in being just a “king”. It hurts Yugandharyan the most. He wanted to see the same glory for his kingdom and king both. He tirelessly worked towards the betterment of the kingdom and the king.

It all started when the army of Vatsa returned from a battle defeated. Yugandharayan wanted the things to be taken seriously by the king, who is quite busy with his music escapades. Of course, Udayan is a gifted warrior and a fantastic musician. His Ghoshvati veena is like an extension to his body and when he played it, he was able to mesmerize people and even animals and birds with the power of the same.

During one such experiment, he even risked himself by giving an escape to the security arrangements made by Yugandharayan and was saved in time.

Ujjayini was another mighty kingdom and his king Pradyot (titled as Chandramahasen) somehow found it amusing to see the downfall of Udayan and his kingdom. He started considering himself as the most powerful king in the entire Bharatvarsh. He has a very loyal and intelligent minister Buddhadatta who is competent to Yugandharayan.

The defeat in the battle doesn’t affect much to Udayan but definitely it was taken seriously by Yugandharayan and Rumanwan (the chief of Vatsa army). Pradyot also started planning to establish himself as the emperor of Bharat and started conspiracies to defame Udayan and capture him or defeat him, whatever is possible.

What turn fate takes from here and how the love story of Udayan and Vasavadatta blossom? Who was Vasantak? Who is Padmavati and how she entered into the picture? Will the dream of Yugandharayan for his king and kingdom be achieved?

You can get answers to all these and many other questions by reading “Udayan The Forgotten Pandava”. On the course, you will meet Udaya, Rumanwan, Yugandharayan, Vasantak, Vijaya, Virachika, Pradyot, Buddhadatta, Vasavadatta, Gopalak, Anupalak, Manjulika, Darshak, Padmavati and many other characters. Most of the incidents took place in Vatsa Kingdom (mainly in Kaushambi – the capital city, and the jungle area of the kingdom), Ujjayani kingdom(mainly in Avanti – the capital city, and the border area), Magadh kingdom and other areas of Bharatvarsh.

The book is a long and interesting read. The characters are developed quite well. The strongest character in the book is of Yugandharayan. Of course, Udayan is the protagonist and events revolve around him but it is like the story of Chandragupta and Chanakya (just for easy understanding, I use this metaphor, Chanakya and Chandragupta born much later, but their story is very known).

The love story of Vasavadatta and Udayan is explored interestingly. The game Pradyot played is quite interesting too. Modern generation may not find the incidents involving Vasantak amusing. They will find them interesting of course. His role is of a Vidushak in the original scripture. And, as you know, the joker is mostly the best actor in the lot with so many hidden skills.

Ghoshvati Veena and Saripaat game (much like Shataranj – or modern day – chess), are nothing less than human characters in the book.

The author is good at exploring scenes, be it natural beauty, a combat scene, dark nights in the village, conspiracies happening in the palace, or game played by intelligent minds, the book has all of them written convincingly.

The book refers Udayan as a king of the Sun Dynasty, but Pandavas were Chandravanshis! So, how can that be possible? I found a space is missing between words in a few places, especially in the second half of the book. There are phrases like “Bharatavarshn sub-continent”, “The Princess’s elephant”,… where you see proofreading mistakes. All these could have been taken care of during proofreading. I think having a glossary will make the book easier to read as there are many characters.

The author is good at wordplays and there are some remarkable oneliners in the book:

Yugandharayan’s mind was a whirlpool of conflicting thoughts.

On the same notes, I like the following line as well:

The road was completely deserted with only the oil torches on both sides burning in lonely solitude.

The book offers some inspirational and full of wisdom lines. Here are some examples:

The world is harsh and cruel at times. It is you, who need to overcome the hurdles and come out unscathed. Even, the kingship or politics is not a bed of flowers and the throne is often nothing less than a thorn. Of course, it applies to those who understand their own responsibilities. For non-serious and dimwitted rulers it is like the resources of joy are at his/her disposal. In those cases, the citizens suffer the most. The book explores similar stuff in quite an interesting way.

The following lines explore the human psyche in a simple yet effective manner.

Reading the following lines will remind you of current situations. You must have heard or read your elders uttering such lines. The same scenario was back and thus it seems that it will be the same moving the point forward also. Are we progressing as human beings or what?!

In ancient times, individuals were focused on imbibing ethics, developing a sense of purpose and duty, and achieving personal development and evolution. In fact, these formed the chief purpose of life. The philosophy and ideology has become diluted with time.

Or, is it the ultimate truth?!

If I had to pick one line from the book, possibly I will settle for the following:

All days are good, Yugandharayan. It’s our state of mind, age and experiences that make them good or bad.

By now, you must have got an idea about the literary qualities of the book and the level of the linguistics you will come to explore when reading it.

I hope, I was able to keep as many spoilers at the bay as possible. Some of them are inevitable, though.

If you like exploring Indian mythology and retelling of ancient tales, this book is definitely a must-read. It is a good reading experience for everyone. There is no age-bar despite having love-stories and wars explored in the book. Overall, I enjoyed reading it.

Previous: Demons of Time: Race to the 7th Sunset | Mini Book Review
Next: An Interesting Author Interview with Lidija Stankovikj