Posted by: Editor2 September 11, 2019 in Books, English Comments Off on A Magnificent Obsession by Rashmi Bansal | Book Review

A hero is someone who dares walking the unexplored path and does the things which others often shy away from doing. He/she need not wear specially made costumes for them nor he/she need any extraordinary skills. What a hero needs is a genuine heart, human qualities, and conviction to fight against all odds to do the things for greater goods.

Arunachalam Muruganantham is one such hero.

The commercial success of Akshay Kumar starring movie – Padman – played indirectly a vital role in making the name famous in the household, especially in India, as Muruganantham is the real inspiration behind the character of the protagonist of the movie.

The book is available at a very reasonable price and is worth reading. Here is my unbiased book review for the same.

Being a gateway to the virtual world explored within the fold, the cover page plays a very crucial role in book reading and purchase decisions. Keeping that fact in mind, one should, of course, judge the book by its content and not only by the cover page. 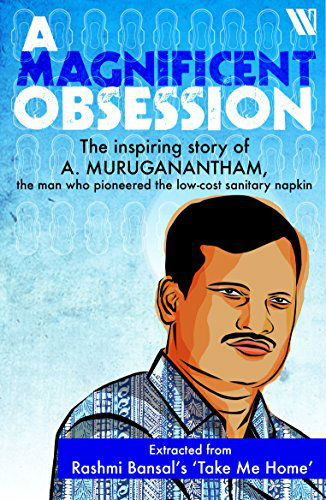 A Magnificent Obsession: The Inspiring Story of A Muruganantham, the man who pioneered the low cost sanitary napkin – by Rashmi Bansal | Book Cover

As you can see the cover page is quite simple yet effective. The blue-white combination with black taking its course, the cover page is easy on the eyes, and at the same time, it can surely catch your attention at a moderate level. Also, using the illustration of Muruganantham’s face instead of using his real photo is also an intelligent decision. It raises more curiosity about the protagonist.

Usually, we keep book story or plot separate from our views and reviews about the same. This book, however, is different in nature, and it is very small in size too. So, let us merge both these sections here.

First of all, we need to appreciate Rashmi Bansal, the author of the book for taking an initiative to talk about unsung or less-sung heroes, who did something remarkable for the society and needs their due recognition.

Arunachalam Muruganantham was born into a humble family in the village of Pappanaicken Pudur near Coimbatore. We often find people complaining about their humble backgrounds and the hard work they need to do. Mostly considering themselves unlucky and not doing the necessary efforts to overcome such situations. Not only Muruganantham but all those who have made a mark in their lives will be never found complaining about the situations and upbringing. You will rather see their actions speaking for themselves. At the beginning of the book, you will find the words of Muruganantham exploring his spirit.

I was lucky to be born in a poor family. People think it is good to be rich but rich people don’t have a real childhood. They don’t run behind butterflies or climb the trees lke I did.

How he was grown up, got married and went ahead in his daily job is something worth exploring. There comes a turning point then after. There was an entrepreneur inside him waiting to get unleashed and eventually it got a chance and later he became the owner of “Jayashree Industries” – Coimbatore (Kerala).

His main aim was never to earn a lot of money or live a lavish life. He found saying:

I never aimed for making more and more money. I don’t need a gold bathtub. I want to develop myself.

According to him, one is always capable enough to earn his/her living. More than that often converts into greed. As mentioned in the book:

I understood that survival is automatic, it is natural, it is not in our hands. So every human being should try to do something beyond survival.

His thoughts about the children living under stress for getting educated(!) are worth taking note of; especially by the parents who consider their children as the horses of a race and coming first (or in top 10 for that matter) is set as the pre-set goal for them. He says:

I feel sad when I see children in ties going to school in cars and buses. They are living in a golden cage, missing out on the real childhood.

I consider him absolutely right.

The book is not only about preaching good things and positivity. It is also about inspiration. One’s character often takes a shape in the hard times. It is about how you react to the hurdles and challenges, right?

I found the following lines in the book quite inspirational yet rational.

If the problem is tough you cannot find a single man there… you stand there and you will definitely get an opportunity.

And, there is an example to back these thoughts.

To find a pearl you have to jump in the sea ten times, twenty times, hundred times. You won’t find it floating on the surface.

His thoughts about the material life and leaving a legacy behind will remind you about similar thoughts expressed by many wise men, including Bill Gates, Warren Buffet and others from current time.

The question is, what are you going to leave behind? A house, a car, a bank account? Or, an idea that created a small ripple in this beautiful world.

In addition, I like the way the author has also included brief details about “Jaydeep Mandal” and his efforts in making “bio-degradable napkins”. It requires a special mention because we found that inspirational biographies often take the path of “worshipping a person”. If someone is a legend then he or she already is a legend, there is no need to focus only on those things and later adding superlative attributes to the same. Taking note of other good stuff which continues the legacy forward or improving the things in an even better manner; is always a positive attribute.

And yes, the protagonist has done a remarkable job, but the people who supported him in one way or the other should also be appreciated. And the book does so.

A revolution needs leaders, and foot soldiers. Who march to the new beat. Who live and breathe and believe in the mission.

The story is not only inspirational but it also focuses on a real problem faced by females (especially from rural areas). The quest of Muruganantham to find a solution to the issue and eventually breaking the barrier is something worth knowing about and get inspired from. The simple yet effective language used by the author makes the book an easy read. The characters are developed quite gradually and they all remain grounded. The book also talks about the hurdles the protagonist faced at different stages.

The book gives us a message that even if we cannot walk the path like Muruganantham, we should be wise enough to support those who are doing their bits in making the society better, or at least, we shouldn’t be another hurdle for them.

A swift and inspirational read at affordable rate. No matter if you have watched the movie based on the protagonist, rading the real story about him is always has a charm.