While reading entertaining books is a great way to relieve stresses of the daily life, reading stories from different countries and different cultures is essential to understand the flows of history as well as our own time. People move and generations change, but we have all heard the cliché that history repeats itself. Is that because no matter where they live, humans have common traits that drive their collective behaviour? Or does time twist us all in its spirals as we try to make sense of our lives and where we are?

Such questions are widely explored in stories of migration and movement. India has a longstanding history of its inhabitants travelling East to Burma/Myanmar and South-East Asia, as indicated by linguistic and cultural similarities and stories of sea-faring adventurers going to Indonesia, Malaysia and much farther. Continuing our reading journey of such stories, we recently came across author Dr. Sreedhevi Iyer’s debut book, The Tiniest House of Time.

And so here is our book review on behalf of Team Thinkerviews. 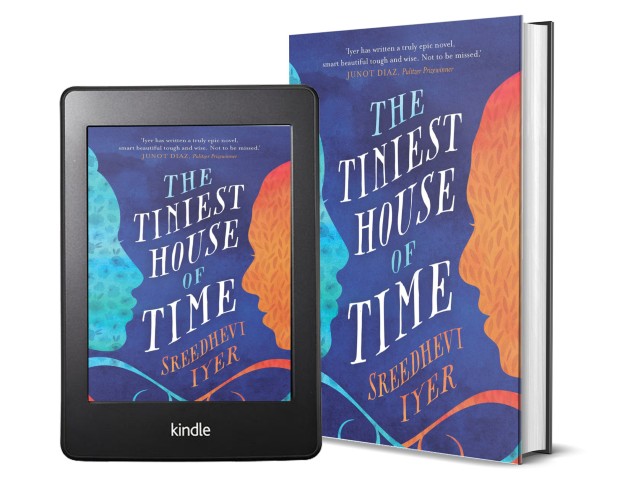 The Tiniest House of Time by Sreedhevi Iyer | Book Cover

The title of the book is derived from one of Saint Kabir’s poems and if you are familiar with those you’ll recognise the title and where its leading:

When you really look for me, you will see me instantly

you will find me in the tiniest house of time.

Kabir says: Student, tell me, what is God?

The coverpage of the book has a deep blue background showing the title of the book and the author’s name. On both sides of this, are two profiles of faces. Two faces – one in spring, one in autumn, looking across the span at each other are a good representation of the dichotomy and the thread between the two main characters of the book.

While moderately attractive, the coverpage could be updated to be more visually appealing and eye-catching for casual browsers.

Sandhya Sastri lives in Australia in 2007, where she came for studying and now has found a job. When her mother Nandini calls with the news that Nandini’s mother Susheela Sastri, Sandhya’s beloved Patti has been moved to a palliative care unit, Sandhya travels back to Kuala Lumpur.

Susheela and Sandhya were born on the same date, and the family story goes that they could have been made out of the same atom. Growing up, Sandhya found loving home in her grandmother’s stories and now as Susheela prepares to depart this life, Sandhya relives not only Susheela’s story, but her own conflicted past in the few weeks she has left with her grandmother.

We learn of young Susheela’s life in Rangoon in 1930, as her Tamilian family gets caught into the racial conflicts between the Burmese and non-Burmese population. Susheela loses her eldest brother Chellappa in one such riot, Burma is separated from India, religious tension builds and life becomes more restrictive for Susheela who has a Burmese friend called Zaw, who loves visiting the Buddhist temple of Shwedagon and who is now no longer able to go to her Telugu school.

As second world war brings Japanese attacks on Burma, Susheela, her brother Nanda and their father join the exodus of refugees fleeing Rangoon and travelling to India. After the terrible ordeal that strips the refugees of all pretensions of civilities, they finally make it back to India.

Susheela is then married to Sekar, who brings her to Malaya. Here, Susheela builds a life and a family, never forgetting Zaw and her past in Rangoon. And when Sandhya is born, Susheela tells  her all these stories.

Sandhya grows up in small town of Alor Setar in Malaysia. The school, like the country, is clearly divided in Malay, Chinese and Indian ethnic groups. There is also the religious element of separation between Muslims, Hindus and Buddhists. With her toasted almond skin, Sandhya is considered much lighter than typical Indian looks in Malaysia and is often mistaken to be Malay. But the only place where she truly feels a sense of belonging and security is her family.

And so she arrives with big dreams to Kuala Lumpur in 1998 for attending a college. This is a new world – a big city, hostel filled with girls, new ideas on horizon. And just when Malaysia is in grips of the Reformasi movement. She falls in love with Faisal, and along with him and her friends, she joins into the protests against the establishment until realities hit.

As she is robbed off her future with Faisal and her college studies are suspended, she takes the step of going away to Australia and put the past behind her.

But, now she is back and the city has changed so much. As she relives all these stories, where will she go from here?

I loved the book for its vast canvas and the intertwined stories of two women who are generations apart and still seem to be charting the same path. The time of British occupation in Indian subcontinent led to a lot of such stories getting lost and it is always a good reminder of how every pocket of Indian subcontinet had its own struggles to overcome in this era.

The Rangoon of this book had Indians, Burmese, British all living together. Susheela’s Tamilian Brahmin family brought their Sanskrit puja and rituals in the temples, while the wealthy merchants gave their wealth to build temples and schools for children of Indian family, so they could learn their languages and culture. Indians fulfilled a lot of administrative roles in Rangoon, but over time, the Burmese and the Indian communities collided- as we can see in following lines – and the spiral of violence destroyed many lives:

No Indians were in the picture, which she found funny because there were always Indians in Rangoon, sometimes a white man, and never any Burmese.

In midst of all this hate, Susheela found a true friend in Zaw, even before they could speak each other’s language. And when Susheela’s family had to leave Burma, along with thousands of others, they received help from Burmese families as well as Indian. Nothing unites a community like an outside attacker. While the book does a very good job of giving us the Rangoon of those times, the refugee exodus feels like it goes by a bit quickly.

And then we see a very similar racial, religious divides in Malaysia, where also, the Indians are outsiders. So, Sandhya also lives a childhood where she knows she is different from others. She sees this growing up, all around, little acts of separation and finally she thinks she can get it all squared away in Kuala Lumpur, where she sometimes lets people believe that she is actually Malay. During this time, she is coming back to college, and there is a beautiful passage as below, which speaks a lot about being coloured:

She started counting every time a passenger entered or exited the bus – noting not the number of people, but the shade of their skin. Light brown, dark brown, creamy brown, nude brown, off-white, yellowish bone, coffee brown, chocolate, charcoal – the words came so easily when trying to make such distinctions. Language lent itself to labelling, as precise and exacting as possible.

And so you see, the book tackles the issues of divisive nature of humanity so ably. How many reasons do we find to state why we are different from “others”? – Race, color, religion, language, country and so on. I also like how the author reminds us of the idealistic college days where every generation has tried to rebel, reform and tried to reshape the world around us. But how much of that effort actually leads to a change? And how many young students are left disillusioned?

The author has done a very good job of building cultural spaces – through Susheela she gives us a Tamil household, her love of BhagvadGita and Sanskrit. Through Sandhya, she shows us bustling Kuala Lumpur with its tea and coffee houses, young students debating loyalty to state through stories about historical figure of Hang Tuah, its ambitious building of Petronas Towers and inter city railways in 1998 and how it forms massive retail spaces and a different way of life by 2007. And yet not all this progress changes any of the fundamental ways in how the country is governed.

And so at end of it all, Sandhya finally understands with her grandmother that no matter what paths they took or ran away from:

Everything that has happened, has always already happened.

In summary, this is a beautifully rich story of Indian families finding their places in the wild world in middle of racial tensions and chaos.