Literature is a mirror where we see ourselves – both for better and worse, where we reflect upon our strengths and our insecurities, where we change established notions and sometimes ask the difficult questions which are generally considered taboo in real life. Author Avni Doshi’s debut book Burnt Sugar – Published as the Girl in White Cotton  – in India has been termed shocking and challenging by many readers as it is marketed and reviewed as a discussion of difficult mother-daughter relationships. But the book is also a study in dysfunctional familial relationships and how it moulds the psyche of all around – when home is not a safe place.

The book has been critically well-received and was shortlisted for Booker prize in 2020, where incidentally the winner was Shuggie Bain –  story of a young boy growing up with an alcoholic mother. I have been meaning to read Burnt Sugar for some time and recently, when I got a chance to borrow the audiobook, I listened to it and here is our book review on behalf of Team Thinkerviews. 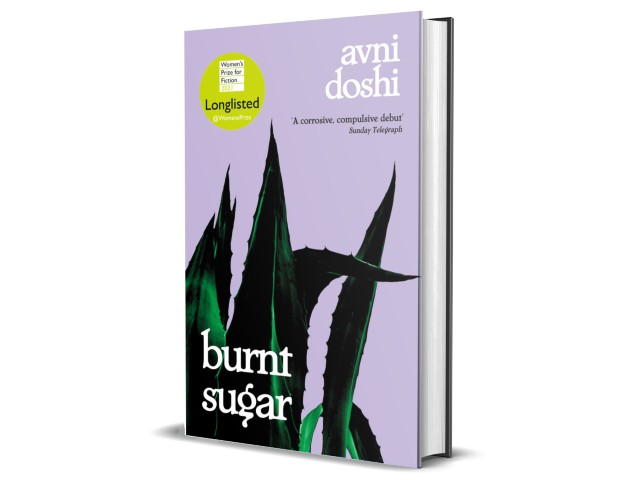 The book is filled with internal conflicts amongst characters and the title itself suggests the irretrievable bitterness that creeps into something sweet over time. The cover page is elegantly designed to show fronds of an aloevera type plant which invariably also carries stinging thorns. I think, the designer was trying to emulate the images of burnt sugarcanes’s leaves – to represent the book title in the most authentic way.

A moderate cover page that could be re-designed for a lot more visual appeal.

Another version of the book has a cover page where a young girl is seen looking towards the reader. The girl tries to express many feelings at once. An emotional cover page.

Antara is facing the possibility that her mother Tara may be losing her mind. Although only in her fifties, Tara has been diagnosed with Alzeihmers. And so Antara visits doctors with her and tries to find a remedy from any school of medicine that will help her mother. She plays with the diets and tries to arrange home care and continues to battle on while together and separately they visit the past they shared and stories they tell each other.

Young Tara was beautiful, but as her mother put it, ‘No one knew what Tara wanted from life’. In her younger self’s quest for admiration and love, she married Antara’s father, a young student himself. But the romance faded away and Tara slowly started going to the Ashram. When Antara was born, she was also taken here everyday, by her mother.

Eventually, Tara left home as she became lover of the Baba – head of the Ashram. Antara was left with another devotee- Kaali Mata for most of the day. But some nights her mother would return to give her love laced with cruelties. When Baba left her, Tara became a beggar on streets of Pune and eventually returned to her well-to-do parents.

Tara divorced Antara’s father, got some money from him and started to live separately from her parents. And just as Antara was becoming a teenager, Tara took a lover – a wandering artist called Reza Pine. Eventually, he left them too.

And now, Antara has lived a past with her mother and separate from her. She is married to Dilip and on the way to become a mother herself. And yet, there is no escape from the bitter, intertwined lives that they have created.

Mother, I am so tired, tired of introducing myself to you

These lines introduce us to the world in this book and give the reader a very good idea of what to expect as they get thrown into it with a jolt with the following lines:

I would be lying if I said my mother’s misery has never given me pleasure.

I suffered at her hands as a child, and any pain she subsequently endured appeared to me to be a kind of redemption – a rebalancing of the universe, where the rational order of cause and effect aligned.

These are Antara‘s words, and we right away recognize in her a narrator who is not going to be an unbiased teller of the events, but someone who lived through painful years growing up and is now telling the tale through the hazy lane of memories she stored as a child and now as a grown-up woman. It is Antara’s perceptions, version of events she heard from other family members and friends that form the picture of the woman Tara was, and the woman that was Antara’s mother. Her beautiful, vibrant, self-centred and at times cruel mother, who could destroy her daughter’s peace with a word or a glance.

Whenever, they have a conversation now, it is filled with references to the past, the small cruelties, the vast injustices, the in-built desire for approval and love from each other. And the covetousness, to have and hold everything that was once dearer to the other. No matter  how much they try, they can’t get away from one another and Antara continuously fears that she will turn into her mother. This is the strongest thread throughout the book – Tara and Antara.

But there are stops on their journey which will sound familiar to the reader. The ashram in Pune will remind most people of the Rajneesh movement and make you wonder how that place would have affected a child with its free love, free access to narcotics and quest to combine desire and joy. As Antara’s mother adopts the white of the ashram, it only binds the mother and daughter with each other and away from the society:

The white of widows, of mourners and renunciants, holy men and women, monks and nuns, the white of those who no longer belong in the world, who have already put one foot on another plane.

The white of the guru and his followers. May be Ma saw this white cotton as the means to her truth, a blank slate where she could remake herself and find the path to freedom. For me it was something different, a shroud that covered us like the living dead, a white too stark to ever be acceptable in polite society. A white that marked us as outsiders.

To my mother this was the color of her community, but I knew that the white clothes were the ones that separated us from our family, our friends and everyone else, that made my life in them a kind of prison.

And where is Antara’s estranged father?

The prize for his efforts would be America, where he could earn a master’s degree in the snow, eat burgers every day and buy acid-washed jeans.

My father liked my mother a long time ago.  He liked the way she looked, at least. May be he agrees to see me some time for the same reason, because I look like the girl he once liked – because I sit in his living room, imploring, confused, with the look of a girl who once hurt his pride.

And so you see why Antara should feel so bitter, so insecure about becoming a mother herself. That’s why I think it is better to read this book as a story of individuals rather then make it about all mother-daughter relationships. Every family may have some dysfunctional bits but not every family is dysfunctional. Parenthood is challenging and no one can be certain what kind of parents they would make until they have a child to care for. It certainly is a demanding role and it requires the parents to put the welfare of the child first.

And that’s where self-centred individuals find it hard. If you are still wanting to measure your own worth through someone else’s adoration and love then parenthood is not the journey that will be easy on you. And most parents blame their child at one point or another for being moody, difficult or just not quite as they expected. If you look at Burnt Sugar as a story of such a family, then you may read it without finding it so shocking.

The author certainly provides some elegant prose, and book is cleverly constructed. But there are also events and references which are just there for the shock value and does not serve any purpose, for example, Antara’s interaction with Purvi in the bathroom. Through Antara’s current life, the author shares some good observations on modern India.

As I mentioned, I listened to the audiobook available on Bolinda Borrowbox app. While it was convenient, the book is read by an overseas narrator for overseas readers, so a lot of pronunciations – including Antara’s name – leave a bit to be desired.

In summary, this is a challenging and difficult tale of the intertwined threads of lives of a mother and a daughter whose love has a bitter test of burnt sugar…