Posted by: Editor February 16, 2021 in Books, English Leave a comment

We came across author Sujata Massey‘s books featuring Perveen Mistry – a young, female solicitor working in Mumbai of 1920s and reviewed the first book of the series here:

The book was successful and so like many other writers, Sujata Massey has given us a second murder mystery featuring Perveen Mistry, this time involving royal intrigue. I had a chance to read it for Team Thinkerviews and here are my thoughts on it.

The cover page is designed on the same lines of that of the first book of the series – a lady in a saree draped in Parsi style gazes at a well-known site in Mumbai. The book cover plays up the exotic factor of the book being set in India of the past through these elements. The lady – Perveen – is back-facing the reader and the flower in her hair adds to the authenticity. Light colors are used to prepare the illustration (apart from the building), and it looks simple yet elegant. 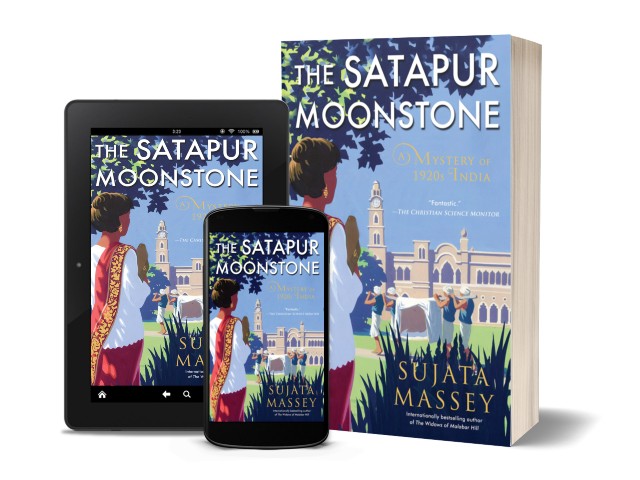 This version of the cover page has almost the same elements but a different color scheme and exposure. There is also a line telling the reader it is a mystery set in India of 1920s.

We meet Perveen and Alice one morning in 1922, in the world of horses in Mumbai Gymkhana. The friends are still discovering the new dynamics of their friendship. But it is Alice’s father who wants to talk to Perveen this morning.

The kingdom of Satapur, located in the Western Ghats past Khandala becomes nearly impossible to access during the rainy season. Through a series of unfortunate incidents, the kingdom has lost both its king Maharaja Mahendra Rao and heir apparent Prince Pratap Rao within a year. The hopes of the kingdom are now tied into the younger prince Jiva Rao. Prince Jiva Rao’s mother Mirabai and his grandmother Putlabai are now at loggerheads with each other regarding further education of the Prince. Mirabai would like him to go away to England, while Putalbai is keen to keep him close. They have written letters to the British authorities to that effect.

Now the queens will not see any male officials directly, including the resident British agent Collin. So Perveen Mistry is tasked with meeting the queens and sort out the matter. Perveen travels to Satapur where she needs to stay in the Government House with Collin until she can travel to the palace. Here she meets a few interesting characters including a local businessman Yazad, his wife Vandana and an Anglo-Indian civil engineer.

Eventually, in spite of many obstacles, she does make it to the palace and meets the royal family and the royal court there. The visit only reveals more complications in the matter, and she has barely made it back to the Government House when the Prime Minister of Satapur comes hunting her down accusing her of kidnapping Prince Jiva Rao.

There have already been too many suspicious deaths, will Jiva Rao’s fate will be the same as the rest of his family? What can Perveen do to save the Prince and save the kingdom?

The first book was richly detailed and did a great job of drawing the trajectory of Perveen’s life, so by the time the readers take this book in hand, they have a firm background of Perveen’s life and this book has to depict only the current adventure. So, the book is smaller in length but equally rich in details. The princely kingdoms of India are appealing to a wide variety of readers, so it is a good set for attracting more readers, but in some ways, it is the same scenario as the first book which puts someone like Perveen Mistry in a unique position of trust and responsibility.

The women of royal households of India observed strict propriety and did not see male visitors who were not family members. But they would talk to a woman. Being the only woman solicitor in the vicinity, Perveen is ideal to approach the queens and complete the legal formalities. But living within walls is not free of perils by any means. Both maharanis are very strong in their own way and have very clear ideas as to how their kingdom should be governed. They also have to live in perpetual fear of accidents happening to their children, not to mention poisons. And then there are the ways that the kings carry on and beget children outside wedlock to create undercurrents of jealousy within these palaces.

In addition to Perveen and the royal family, there is Collin – an Englishman who has seen war, who lost a leg while he was on duty as civil servant in rural India, and a yoga enthusiast. It will be interesting to see if Collin and Perveen can form a long-lasting friendship. There are also the local characters, intertwined in a complex way that show us the day-to-day harshness and corruption of life in those days and yet manage to forge unusual alliances:

This was like a masquerade party. She had met a woman with a short Western hairstyle and an Indian background, a Parsi man who was married to a Hindu; and now a man with an English name who had Indian bone structure and coloring. And bringing them together was a casual young Englishman who called everyone by their first names.

The author not only brings to life these interesting characters and the world inside the Satapur palace, I also liked the way she paints the pictures of the Sahyadri mountains and the wilderness in this area. She also shows us how difficult even small journeys were not so long ago.

Through the character of Perveen, we still get glimpses of the Parsi way of living and her strong beliefs in the family:

It is hard to be adrift in the world without the acceptance of family.

The kusti protects Parsis from going down the wrong path. It reminds me that no matter how difficult things are, I must speak the truth and do what is right.

I also like the following segments where Perveen thinks about Hinduism:

It seemed arbitrary whether a stone was considered precious or not. It was the same with people.

Hinduism gave everyone a second chance, a way to regain life, but in another form. And a butterfly was a good metaphor for the dowager, who had once loved parties, but never wanted to stray far from her home.

Similar to the first book, I loved to see the Gujarati proverbs in her thinking :):

The sword belongs to the one who wields it. (Mare Teni Talwar). A man who behaves with force will prevail.

The British rulers took advantage of the way the Indian kingdoms functioned. They were always on the lookout for a kingdom going intestate, so it can be merged into their own territories. Following passages in the book highlight the various mentalities and practices of the British:

To the English, we are a nursery of spoiled children. The Satapur agent is in a deep sleep, not wanting to do anything substantial until the maharaja he guards comes of age. Then the agent will assure my nephew the government will build wonderful roads and dams and a railway as long as he pays more in taxes and crops. He will not know any better but to agree.

If the British believe there is corruption or disarray in a state without a ruling maharaja, they have the right to take it as a possession.

Not to mention that the rules governing the rights of women were still far from fair:

The British approved the standing laws made by Parsi males. Your government also upholds unfair family laws in other Indian religious communities: rules that keep daughters from inheriting as much as sons, widows from owning property, and men and women from leaving unhappy marriages.

The book is detailed and well-written. However, there is a slight error on page 232:

Colin exhaled slowly.”I will keep the late prince’s clothing in a locked safe until we know what to do with it. So the new question is, who on the hunt could have murdered Prince Jiva Rao?”

This should be prince Pratap Rao, as he was the prince that died on that hunt.

All in all, a good installment in the series taking Perveen Mistry to yet another place filled with women whose safety and well-being may depend upon her solving the riddles in time and finding the right solutions.

Previous: Raising Hell for Peace: A Crusade by the Brahma-Kshatriya by Shashi Bakshi | Book Review
Next: Be Careful What You Wish For by Laura Wellington | Book Review