Home / Books / Raising Hell for Peace: A Crusade by the Brahma-Kshatriya by Shashi Bakshi | Book Review

Raising Hell for Peace: A Crusade by the Brahma-Kshatriya by Shashi Bakshi | Book Review

Posted by: Editor February 13, 2021 in Books, English Leave a comment

How often we recite the saying “History repeats itself” and that life goes around in circles.

Although each individual is unique, the collective lives of people seem to go through the age-old cycle of trouble, toil and turmoil that brings forth exceptional political and spiritual leaders. Believing that we have all been well and truly living in Kaliyuga now, a few works of fiction have been featuring the promised arrival of Kalki – the tenth avatar of Vishnu that will put end to the atrocities of Kaliyuga.

Most of these works are mythological / historical fiction, e.g., Kalki series by Kevin Missal. We have reviewed these books here:

But recently we came across a political thriller based in modern times with an interesting take on Kalki‘s arrival. Team Thinkerviews was very happy to digitally connect with author Shashi Bakshi and on behalf of the team, I had a chance to review his debut work – Raising Hell for Peace – A Crusade by Brahma – Kshatriya. The book has been self-published by the author and we are thankful to Shashi Bakshi for providing us a copy of the book for unbiased book reviews of the same.

As we so often say here, the cover page is a doorway to the world hidden inside the book. If you look at the author’s notes, it is mentioned that the cover page image was digitally purchased from Shutterstock, which is interesting in how we have access to images from all around the world these days. 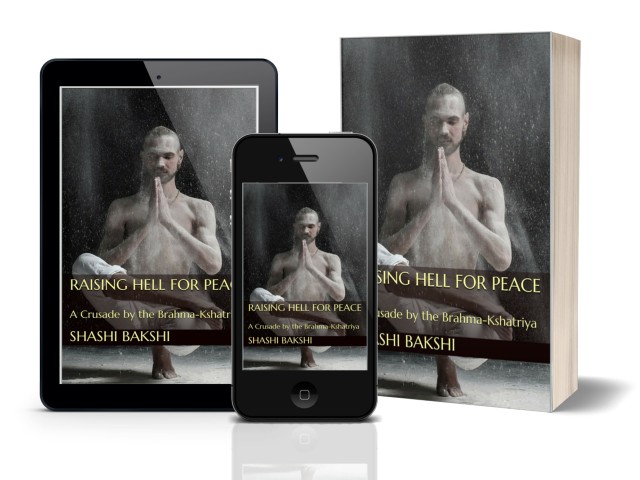 Raising Hell for Peace: A Crusade by the Brahma-Kshatriya by Shashi Bakshi | Book Cover

The image on the front cover is a grainy photograph, featuring a yogi in deep meditation and the word it brings to mind is ‘transcendence’. To that effect, if I had picked up the book, my first impression would have been that it is a spiritual, yogic knowledge sharing book. It is only by reading the background you realize that it is a modern political thriller.

A more colorful cover page will help with attracting readers who are browsing for modern tales.

Starting in 1976 in an Ashram near Nagpur, we meet Guruji who is a key figure of Indo-Aryan Pride Organisation, a political party with rigid political views and a fair bit of influence in Indian political scene. Guruji is meeting Sharma – a detective – who is in charge of investigative work for Guruji on various fronts and now tasks him to find the child who is about to be born. The Grah-Nakshatras are aligning to the combination that heralds the birth of Kalki and Guruji wants to bring this child to the Ashram and raise him there.

Sharma fulfils his quest as he finds the child right after it is born in Shambhala Hospital. The boy has lost his father and mother already and Sharma convinces his uncle to give him away. Guruji names the boy Deshbhakt and so starts the journey of Desh. Guruji tasks an elder boy Balraj to be the life-long protector of Desh.

Desh grows up and his path crosses with Aryabhat – Arya when he goes to college. Arya has just suffered the loss of his parents in communal riots and is focused on his studies while Desh is an active protester at all fronts and only paying minimal attention to the course. They become friends for life here until Desh’s political activism leads him to jail while Arya goes to USA for further studies.

At Princeton, Arya meets Katarian, Kamala and Baozhai and with these friends take part in activism against social stigma and injustice at the university. After completing his studies, he returns to India and becomes a political consultant. Through use of modern technology and statistical analysis, he makes his mark on the Indian political scene by generating victories for state governments. And so he meets Desh again who has continued his political career and is now chief minister of Uttar Pradesh.

Desh started at grassroot level and with his hard work gained the victory. Unfortunately, the IAPO narrative is taking over and his loyal and yet misguided supporters like Balraj are taking actions without Desh’s knowledge or approval. Desh needs Arya’s support for the next election.
In a separate thread, we see the world-level conspiracies being orchestrated by heads of states like Anton Ivanov and Donald Smith and officials of church like Archbishop Julius Silvani.

How do these threads merge? Can Arya help Desh rule not only his state but the entire country? And is Desh actually Kalki avatar?

The book lives up to the categorization of a political thriller with a mythological undertone at most times. The author builds up his foundation right in the first chapter as he gives us the background on the Indo-Aryan Pride Organization (IAPO) and its goals of establishing a certain kind of rule in the country. To their way of thinking, Kalki also is the right choice for the next exceptional leader that this country needs, and who is supposed to put end to all wrongs and establish the way of Dharma in the modern times.

The narrative works well until the boys grow up and when they are in their youth getting education. It is once they are players in the political arena that the story becomes a bit less fluent. There is Desh on one hand, who is not realizing his full potential and is being used by the factions in his own party to create chaos and then there is Arya who wants to introduce scientific thinking into public policymaking and change the way modern politicians and rulers are still “dividing” the masses to rule. Their struggle with the established norms makes the book an enjoyable read, but the last segment of the book has room for improvement.

While the central thread and objective of the book is admirable, a lot of readers may not completely agree with the political journey and circumstances that the author has used to create this book. They very closely resemble modern India and readers will invariably compare the characters and events to real-life events and people. Not all readers will agree with the author’s point of view over some of the chain of events.

The author has used religion as the basis of his majoritarian discussions, but I think that the modern world has a lot more ways in which majority-minority issues are played out – skin colour, racial background, language and culture and a lot more. Instead of celebrating the diversity that makes this world so interesting, there are always forces who play the divisive cards. Even religions are separated in sects and majority-minority issues are at forefront of religious divides and persecutions. And the author highlights that too:

A majoritarian state would be a democracy or dictatorship that asserts that a majority, which might be based on religion, language, social class, or any other identifying factor, is entitled to dominance the society. The dominance includes having the right to making decisions for the entire society basis what the majority believes is correct. The fact that it may come at the expense of injustice or oppression of the minority community doesn’t matter.

Since religion-based politics is featured in the book, there are a fair few observations here that try to cover various aspects of this around the world from both divisive and uniting point of views:

When there is an innate desire to pursue religious radicalness, good nurturing can seldom change it. It is further strengthened by misinterpreting scriptures, events and people to formulate hatred deep within oneself.

Even after all the offerings that his parents had made to the Gods and Goddesses, they met a cruel end. The riots which claimed their lives were inter-religion riots. So, in effect, the devotees of two different gods were killing each other in the name of religion. What’s the point of all these religions then?

People achieve their spiritual goals through different paths, but there is a singularity in the spiritual realm.

When did the state and the metaphorical church merge to this extent that the pillars of democracy are subverting to the very constitution that it’s supposed to uphold?

Although the mythological undertone is emphasized through the naming of chapters here after Avatars of Vishnu, the author also has tried to bring together widely-known conspiracy theories to create some of the events in this book. I won’t spoil the fun by mentioning each one of them, but let me just say they vary from terrorist attacks to presidential elections to pandemics around the world. Not all of these are manifested in the book and some events and links are sketchy, but that is why fiction can achieve what real-life scenarios cannot 😊

I liked the book for the optimism, which propels Arya’s character to bring order to chaos and that if we all do our bit to spread correct information and knowledge then we can fight back the opportunist politics that does not achieve long term gains for the people of this world:

The world is suffering from an upsurge of megalomaniac leaders chasing power by manipulating people through instruments of divisiveness, hate and fear relying on philosophies of majoritarianism and nationalism. The differences in society of religion, language, social class, sexuality, or some other identifying factor are being exploited for the same.

The policymakers should rely on the principles of competency, consistency, coordination, communication, completeness and continuity.

Desh’s character is interesting at the beginning, but towards the end, the author doesn’t quite make him work at his full potential. By the time the big moment of truth arrives, he is rather thinking of handing over the reins. So has he fulfilled his destiny?

The second strongest character is that of Arya, who is striving towards betterment of things. But we mostly get only glimpses of the women in their lives. Although both Kat and Kamala play a big part in the world events.

Although the book is written in modern, appealing language and is easy to read, there are quite a few errors in proofreading and typos. I have only shared a few examples below:

Writing a book and self-publishing is a huge undertaking and we admire the author for it. The above errors are pointed out only so these can be taken out in the next edition.

All in all, an interesting political thriller for those who are taking a critical view of current affairs…

By God: The Making of a Messiah by Shashi Warrier – Book Review

Previous: A Candid And Detailed Author Interview With Pramudith Rupasinghe
Next: The Satapur Moonstone by Sujata Massey | Book Review