Continuing the trail of entertaining thrillers featuring aliens from the planet of Lorien, The Power of Six is the second installment in the Lorien Legacy series by Pittacus Lore (authors James Frey and Jobie Hughes). The book was published by Harper Collins in 2011, and was popular amongst its target audience of young adults and sci-fi lovers.

In spite of some glitches here and there, we did enjoy the first installment “I am Number Four and so we also listened to The power of Six in an audiobook format – read by Neil kaplan and Marisol Ramirez and published by Penguin group. Here is the quick link to the same:

Being an entrance to the virtual world of the content within, a book cover plays an influential role in book purchase/reading decisions. 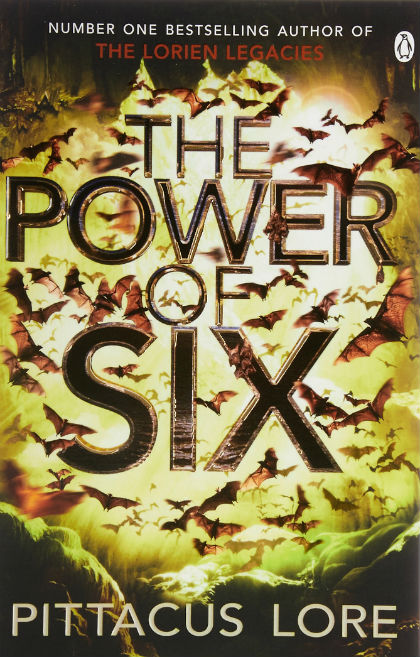 The cover page of earlier editions may not be found that much attractive, but all the reprints are studded with a fantastic book cover. In addition to the cover shown above, there is one more version with the blue background, but let us talk about this one.

As you can see the cover page is quite interesting and attractive. If you know the story you will find the illustration represents an important segment of the same. The cheerful colors make it more desiring.

Just to recap part 1 – we left John Smith with his best friend Sam and another ally number Six – a raven haired beauty who can control the weather, can become invisible and is an extraordinary fighter. Unfortunately, John’s cepan Henri died in the battle with Mogadorians and John, Six and Sam had to run away from Paradise, Ohio, along with John’s dog Bernie Kosar.

So now if you look at the numbers (pun intended!): Numbers one, two and three are dead, so only six members of the original nine guards are left – hence the book is called the Power of Six.

As you can probably guess by two narrators of the audiobook, this book has two threads as we follow John, Bernie Kosar, Sam and Six in America and meet number seven – a girl called Marina, who has been living in the convent of Saint Teresa in Spain with her cepan Adelina.

Marina’s life is pretty bleak within the walls of the orphanage where her cepan has turned to religion of the earthlings, other girls try to bully her, and she has no real friend other than Hector Ricardo who lives in town.

As Marina’s legacies develop, she is desperate for guidance and support from Adelina, which is not forthcoming, neither does she have her loric chest. She finds a cave in the mountain and turns it into a makeshift workplace to paint and to practice her powers.

Marina turns to the Internet, as and when she can, to search for news around the world and in last few days, has been following the events happening in USA. In her mind, she feels a connection with John Smith and is pretty sure that he is one of the Loric Gardes. She also sometimes sees a beautiful, dark haired girl.

Soon enough though, she starts to sense that someone has been in her cave and Mogadorians are watching her. She finds an unexpected friend in a seven year old girl Ella, a latest edition to the orphanage. Ella finds Marina’s chest for her and Marina tricks Adelina into opening it for her.

Whether it is opening the chest, or a big, loric symbol burning in the mountainside, but the Mogadorian attack comes. Although Marina has legacies, she has never fought a battle like this. Will she find her strength and allies in time?

In USA on the other hand, after a few too-close brush ups with their chasers, and after reading Henri’s last letter, John insists on returning to Paradise, Ohio. Partly to search for clues Henri’s letter mentioned and partly to see his girlfriend Sara. They walk into a trap (surprise!!), and the Mogadorian’s get away with John’s chest, while John and Sam end up in US prison.

As usual, Six comes to their rescue. But once they are free from the prison, John defies all logic and wants to the Mogadorian stronghold to get his chest back. Six, however, has other, logical, priorities, so they part ways.

John and Sam get in the Mogadorian cave and by a mixture of luck and audacity find the chest. Not unnoticed of course, and so the fights begin. Can they defeat thousands of soldiers armed with their beasts and their technology and get away? How many other Gardes are in Mogadorian keep and can John free them? And at what cost?

Like we said in the review of “I am Number Four “, if you are after pure masala entertainment, this is your book. This part also doesn’t disappoint on the thrill and violence scale, as the teenagers with superpowers or legacies are always on run, either fighting or running. By now, they have enough enemies to keep displaying their developing legacies and their good intentions, against evil Mogadorians, who also seem to be spreading their tentacles through the government.

The parallel narrative based in Spain is a bit refreshing, as it gives you a break from the USA thread and shows you the hardships these children had to go through in the unknown and merciless world they were thrust in. Of course, no one questions the logical problem of different languages as in spite of growing in different countries, they all speak flawless English with American accent 🙂 when they meet.

The let down, however, is that the authors don’t really have time for character development. So, John and Sam just wander through one fight sequence after another and John’s actions very often are not driven by any sense of logic. He also is shown to go through teenage confusion of feelings for more than one girls, etc. but it is still a side-show. He hardly ever gets a chance to show his commitment for Earth, or his friends, or his girlfriend, before the story takes him off to something else.

The dialogues had me laughing at moments I am sure the writers did not intend 🙂 They are sometimes so predictable and cliched that you can’t help feeling light-hearted enjoyment, e.g. when Sam asks John: “Do you know what freezing water does to a human body?” and you think, No, of course not, he is alien 🙂

Like in the first audiobook, there is a room for improvement for the narrators – especially the American part, but still, I am glad, that I listened to the audiobook format. It might just add that extra amusement factor to the story that is almost a thrilling, entertaining movie… The total run time is around 12 hours, so will be perfect for long journeys…

The Chronicles of Thomas Covenant – The Power that Preserves | Book Review