We often wonder that why some directory sites classify “book reviews” in entertainment category. But, then, when we take a broader look at the books flooding the market, we realize that a large number of books are written with the same purpose. Some of the books however are written for a cause. Of course, they tend to provide thrill and entertainment to the reader, but they have substance. Here are some of such books we got a chance to read recently.

In the same segment, one more book came to our notice, The Poacher by author Neilay Khasnabish.

As the name suggests, the book is about the poaching and canvas is setup to the Kaziranga National Park which is an abode for rhinos. If the poaching of the rhinos is taken proper care of, the species can fall in “extinct” category. 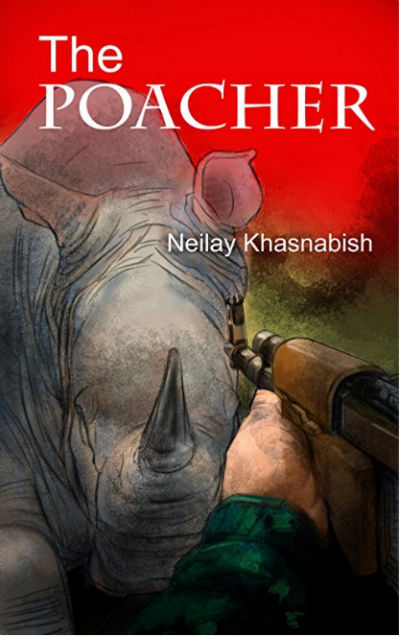 The illustration of a Rhino and the poacher’s gun aimed to it, reflects the content of the book quite well. The use of red as the background color in the top half of the illustration is thoughtful. The front pose of rhino in the illustration was necessary for many reasons including “to show the horn of the rhino”. Yes, rhino horns are considered very valuable and as per many references, including this book, it is sold in the international market at really really remarkable rate. It is worth to note that the cover page design is prepared by Pradip Chakraborty. For the cover page we can give 4 out of 5 stars.

George Hazarika is a police officer who believe in doing his duty with honesty and hard work. For a rape case, he went out of the way to crack the case. He uncovered the planted evidences and traced out the real culprits. The criminals were well connected and have influential link. so George need to pay the price! He was suspended from his duties!

So, the world was upside down for him?! Yes, in a sense.

On his way to his home, he see a girl was being molested by some shady characters and he overpowered the goons to save the girl. He made sure that the girl should reach her home safely. During the conversation with the girl, he got to know that she is Jonali Saikia, the daughter of Late Dr. Hemant Saikia. Dr. Heman Saikia was murdered recently by some unknown assassins. Dr. Saikia was a fearless reporter. He was running his own publication and his publication The Kaziranga is popular among the nature lovers. Dr. Saikia was nature lover and was worried about the increasing incidents of poaching the rhinos in the Kaziranga National Park.

Kaziranga national park is known for many things include the wild buffalloes, tiger and flora and fauna; but, it is better known for the rhinos. With the rise in the poaching cases, the population of rhino was decreasing at alarming rate. Dr. Saikia, alongwith his son Jagan and informers like Mantu Bora was trying to uncover the poachers. One week before his death he has published an article in “The Kaziranga” with some important identification information fo those poachers, along with an unclear photo.

George decided to take advantage of his suspence and try to uncover the mystery of Dr. Saikiaa’s death. So, he represented himself to Jonali and Jagan as an aspiring photographer who want to explore the Kaziranga national park. The letter form “the Kaziranga” was sufficient for him to get entry to the national park and meet with the authorities ther and get permission for exploring it for photogrphy purpose.

How George uncovers the mystery is explored in the book interestingly.

First of all the author, Neilay Khasnabish, needs to be appreciated for the topic he has choose to write a book on. If only the commercial success has to be kept in mind, he could have chosen any other topic. However, he seems spent a remarkable amount of time in researching about Kaziranga national park and the places around it. Of course, his research include information about wildlife of Kaziranga, botany and rhinos. The killing of rhinos hit the news many times, but often missed the eyes of many. Whenever the issue is raised at local level and caught a remarkable amount of attention, the promises and plans to preserve the park, the flora and fauna and the wildlife there, emerged. But, the situation seems to be challenging till now.

Though, the story is a fiction, the author has woven all his research work quite interestingly in the book. The way he talks about the wild life there or event the trees and plants, is interesting. You will love to read the way the Kaziranga national park is explored in the book. The way the elephant grass plays a role of a character in the book is quite interesting too. The author refers one of the important points, the availability of the weapons to the guards and those used by the poachers. While poachers come with AK-47, the guards are trying to keep the park and wildlife there, safe and secure using .303 rifles!

In fact, the park security guards and politicians are not painted in black in the book. Though, comparatively less reference is given for the security guards, but it is all in positive aspects. So, the author know the challenges really lie there. And, just blaming the authority is not a solution in anyway.

Neilay, explores the problems faced by honest police officers as well. George is the protagonist and his character is strongest in the book, obviously. You can understand him though the following lines from the book:

“I arrested the real culprits on the bases of my investigation. I wasn’t afraid of their rich and powerful parents having political connections”, he said and smacked his lips. “It’s difficult to fight against the corrupt system, mom. And alone it’s more difficult. But I’ll fight. I’m not afraid of anybody or any consequences.”

It doesn’t mean that the other characters are given any less importance, or not talked about their qualities. Jonali is one of the strong female characters alongwith the mothers of George. Yes, you read it right, mothers. George has two mothers! Well, the details are explored in the story and rather than telling more about it, I would recommend you to read it. I like the way these characters are referred and explored in the book.

The author does the aftermath about some of the incidents to come to a conclusion and convey it to the reader(s). For example, after Jonali is attacked and tried to be molested, she later on deduces the reasons for attack on her as:

And, don’t you agree that it is quite a reality?!

While there are some character defining and inspirational lines in the book like:

Nothing is difficult for a committed person with courage and intelligence.
— — — — — —
Those who live for a right cause, live the life.

there are also some lines which takes realistic approach of the situation, like:

Why should a girl agree to marry a suspended man? A job matters in matters of a marriage.
— — — — — —
The way we’ve planned to get rich can’t be without fears and anexieties.

There is one more character which I like in the book and I must refer, that is of, Sona Mian aka Chacha. He is one of the most loyal and determined yet vulnerable character. He has his own strengths and weaknesses. He also provides some comic relief and he is like a support which one require. Here is an interesting conversation involving Chacha and George.

I like the satire in this conversation which holds the punch. There are philosophical lines in the book like:

You’re bound to feel mentally tortured when you are caught up between decision and indecision.
— — — — — —
Unplesant things should be deleted from the memory.
— — — — — —
I tell people several times that there are some mistakes you’re unable to correct. Sometimes, you make some mistakes knowingly.

The way the author explores the nature, landscapes and builds the scene is worth to go for. Here is one small example of the literary quality you can see in the book:

It moved through the ocean of fog, splitting the silence of the night.

I also like the way a character is named as Monalisa, and in the last segment of the book, the reference to the mysterious smile of Monalisa is given.

Author’s aim for writing the book and the message he wanted to deliver can be seen through these lines in the book:

The life of a rhino is as precious as that of a human. Animals only construct. Only humans are responsible for all the adverse happenings in the world. The destruction of the universe will be blamed on humans, not on animals. Animals and humans are interdependent. Animals don’t kill people the way people kill them. People kill them for sports, for meat, for their benefits. Quite often, people behave towards them ungratefully. And poachers? They are worse than jackals or hyenas or vultures.

The references to the flood, the balance the ecosystem requires, and many more points are simply a delight to read.

I am not talking about many scenes, aspects of the book to avoid spoilers.

I found this book is written with the love for the nature and rhinos of course. Such books needs to be appreciated and most importantly read by a large number of readers. It explores the natural beauty, ecosystem and the wrong done to it, quite nicely. Even, young adults will find it informative. And yes, there is no adult only material, so everyone can enjoy reading it.

Quick Purchase Link(s):
Over to you: