Posted by: Editor September 11, 2022 in Books, English Leave a comment

Detective fiction is one of the most popular segments of fictional writing and like countless readers around the world, we also enjoy reading these books and are always looking for interesting detectives created by contemporary writers. Such works show a range of newly minted investigators from police officers to social workers to freelance agents to private citizens. Here at Thinkerviews platforms, we have shared quite a few works showing the range of such personalities and here are a few links for you to explore such reviews:

Going through a stack of books marked as our reading pile, I came across the first book in a fictional detective series that we have been wanting to read for a while. Published in 2012 by Pan McMillan, The Masala Murder by Madhumita Bhattachraya is the first book featuring a Kolkata based private investigator called Reema Ray. The series now features quite a few books portraying this fine female investigator. And here is our review of this book for you on behalf of Team ThinkerViews. 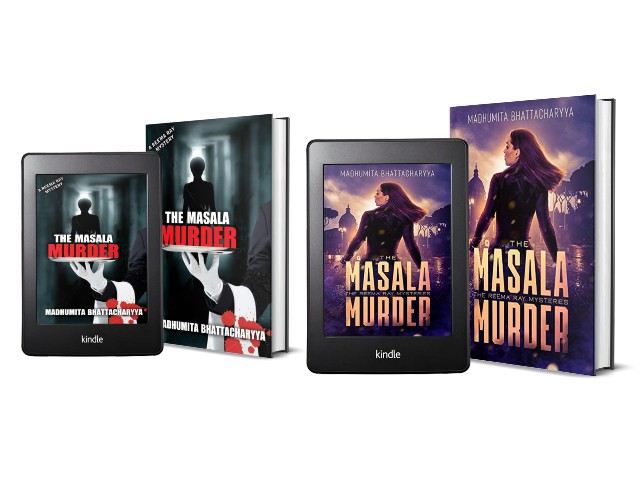 As you can see above, the book has gone through a few editions and reprints. The version shown in the left image above shows a hand holding a platter – like that carried to serve food – and a dark figure in the shadowy background filled with mysteries. Colour red is used to denote danger and possibly murder.

While the second cover page shows a daredevil female protagonist dressed like a ninja warrior facing a city monument.

In my opinion, neither of these covers are a perfect representation of the world within this book. It would be much apt to have the Kolkata of Reema’s adventures in the background and probably a modern, Indian woman representing what reader would come to see in Reema Ray.

We meet Reema Ray as she introduces us to the patterns of her life – her love of detecting, her membership of the Calcutta Crime-Fighter’s Club (CCC) and her second job as a writer for a magazine which takes her on culinary adventures in the city. While being a private detective is her first love, most of her cases have been about spying on cheating spouses or checking out potential grooms. It is the second job of being a film critic / food critic that is keeping the roof over her head.

In course of one of her restaurant visits for review, she meets Mallika Mitra – an elegant lady owner of an authentic Chinese restaurant. While there, Reema receives a phone call informing her that a man she recently interviewed – Prakash Agarwal – has died in suspicious circumstances. Mallika’s reaction to this is very strange.

Prakash was a supplier of gourmet food ingredients to almost all restaurants in Kolkata and his death will leave a gap. But strangely enough, the police calls it a murder, then drops the investigation and then opens it up again. Curious, Reema starts to look into this matter and visit a cast of characters in the restaurant world including Mallika’s chef, another restaurant owner Bineeta and her husband Mrs Agarawal.

On the other hand, Reema’s ex Amit suddenly comes back in her life. This time with a problem that his wife Aloka has been kidnapped. Aloka’s parents are very rich and a ransom demand has been made to them, but Amit is the prime suspect.

And so just now when Reema has had to give up her office due to lack of paid detective work and the magazine wants her to become a full-time employee, she has two cases. Neither is a paid one though and she seems to be going around in circles, while also running into a stranger in oddest of places…..

Will she find the answers she is looking for?

When I started reading this book, it reminded me of quite a few other successful ventures that share a lot of elements from this book.

The first one is cooking. Reema has grown up in Kolkata, but studied in USA for her college years and has come back home with a love of baking. She bakes to clear her mind. There are the Hannah Swensen mysteries by author Joanne Fluke, which are quite popular in America. Hannah is an owner of a bakery and amateur sleuth. The series has now dozens of books and each book shares a murder mystery as well as recipes with readers!! If you are looking for an escape into small town America filled with baked goodies, those are the go-to books…

Then there is the CCC. The most recent, successful murder club I have come across is Richard Osman’s Thursday Murder Club books. But those books very much focus on the murder club resolving the crimes, while in this book the CCC is mostly in the background. Its members are very well sketched out though and it is hard not to love Santosh Da for his support for Reema.

Reema’s estranged parents and her slightly cosmopolitan upbringing makes sense once we start exploring Kolkata with her that is filled with international food restaurants. We can also understand a lot of her interactions with people, cocktail parties with Devika, visits to pubs serving nachos, her struggle with moving on from Amit and to the next man, as she is young, single and beautiful. All this, at times, makes her more appealing in a Western way. She could have come out of any detective novel published anywhere in the world.

But she is endearingly honest:

Motive, means and method. In theory, I knew how to solve a murder. In practice, I had never come close, never even had the chance.

I also quite liked the character of Uncle Kumar, who takes young Reema through the hard truths of a police detectives jobs and lets her find her own career path. And while her dream always has been to be a seeker of truth, she also has to learn that

Sometimes a detective’s job is to discover the truth – though the whole truth is seldom required. At other times, it is simply to uncover a series of events, which do not necessarily illustrate the true nature of things. Still more often, it is simply a matter of putting available facts together and seeing where they point.

Accounts can vary widely as to how close the criminal justice system ever comes to the “truth”.

Truth and law are hardly the same thing.

She is also courageous and resourceful and although she has to make some guesses along the way, she gets her facts right in the end:

All crime is essentially the same, that in all crime, it is the details that give away the big picture; that what is missing is often more important than what is staring you in the face?

Being the first novel, the book is a lot about building Reema’s life, while there are two other tracks to keep the mysteries going. Both simple in nature, abduction and food poisoning and yet it takes everyone a while to solve the mystery, which will entertain the readers. I quite enjoyed the author’s descriptions of the Kolkata food scene and Reema’s sense of humour. The title makes more sense once you come across all the characters and how the murdered man was their “masala” supplier, with plans to launch a chain of stores across the world that will re-introduce curry.

I liked how the author has tried to explain why some people make unconventional life choices and take on jobs that may appear dangerous and difficult to others:

It helps me make sense of the world. To understand it. To set things right where I can. And to help people who are helpless.

In summary, an entertaining and enjoyable start to the series featuring an enterprising detective who takes on life as it comes every day. We are looking forward to reading further books in the series and can recommend those to murder mystery lovers.