The Man who found his Shadow by Marwan Razzaq | Book Review

As we enjoy reading, so we enjoy connecting with other readers and writers here at Team ThinkerViews. And as part of this process, we receive and get a chance to read books from around the world. Author Marwan Razzaq connected with us and shared his book The Man who Found his shadow.


This book was self-published by him on Amazon Kindle and the author shares his aspirations and desire for feedback from readers in the end segment of the book. And here we are sharing our thought on this book with you.

Being a gateway to the virtual world explored within, the book cover plays a vital role in making the first impression of the book. And thus, it is often responsible for many purchase and/or book-pickup decisions. 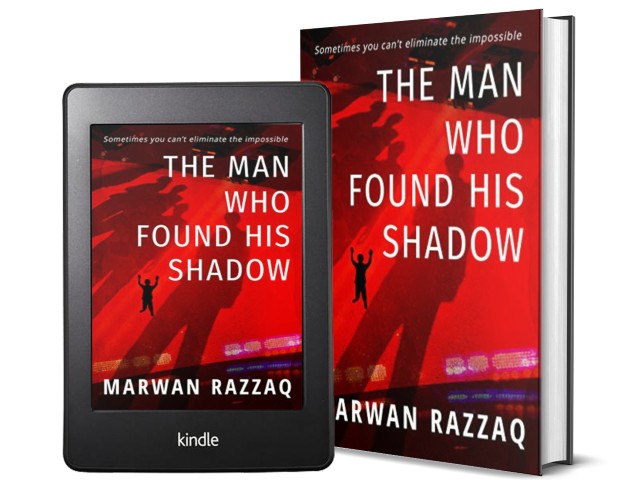 The Man who found his Shadow by Marwan Razzaq | Book Cover

The blood red background is justified on a book focused on mass shooting. The black stripes on the top and bottom of the cover pages adds the elements of dark times. The illustration of a person and multiple shadows complements the same. It is a simple cover page that remains faithful to the book content.

It is just another day in a bustling city in United States of America, with the family of a school teacher Mohammed Iqbal celebrating his award as the best elementary teacher with friends and family. But the man of the hour is missing. And then disaster strikes.

There has been a mass shooting. There was a National Rifle Association convention in the Bremmer Plaza Hotel, which has now turned into a site of massacre with death toll of more than 250. An event like this gets every law enforcement agency riled and soon the police are joined by FBI and ATF. As it happens, CIA also had some agents in this convention and the Governor happens to be one of the wounded.

Every agency has something to lose in this scenario, and they are all following their own agenda to limit the damage to their causes and reputations, while everyone is equally baffled by the mild mannered school teacher who has surrendered himself as the prime suspect for the shooting.

Meanwhile, one of the media teams have been able to get drone footages of the shooting venue as well as internal information on the police investigations. As the media coverage leads to protestors rioting outside the police stations along with a terrorist attack, it looks like the mysteries of this mass murder will never get resolved.

As you can see, the premise of the book is very contemporary. It rotates around a very controversial topic of whether access to arms lead to mass shootings in a country like USA. Additionally, the author makes it an interesting crime thriller by showing us the internal workings, issues and rivalries of multiple law enforcing agencies. Each agency has good personnel as well as betrayers. There is also political corruption and money-making schemes of various businessman involved in the armed weapons deals around the world.

With all these characters, the book has multiple interesting twists and turns that keep you interested. However, sometimes it can be confusing to keep straight all the characters and their motivations. The author makes some really good observations from real-life scenarios when such events take place, for example when a hospital is swamped with victims:

The survivors were segregated into vague categories: there were those who’d suffered the most merciful of wounds, with bullets merely piercing the flesh and leaving them shell shocked but physically rather unhurt.

Then there were the ones who sucked up every available triage unit, to stem bleeding from the stomach and limbs that threatened to render the body useless if untreated.

And finally, there were the critical ones. The ones who made almost no sound demanded no attention, but the ones over who doctors and nurses fretted the most. They had organs irrevocably damaged by a flurry of bullets, limbs left unusable. The only part of the body that attracted medical attention was the heart, which, if still beating, meant there was at least a sliver of hope to subsist upon.

The characters are interesting and yet a lot of those would remind you of characters you have seen in many other books, TV shows and movies:

He preferred giving up the career ladder than the yellow tape and black body bags. It wasn’t a macabre sense of fascination with death. It was the task that each crime scene offered, of straightening out a mess or trying to untangle enmeshed threads and figuring out what went wrong.

One of the most interesting parts is how media coverage feeds the frenzied reaction of the people who watch it. It is almost a snowball effect as every channel starts to follow the coverage of other channels and in an intense competition for attention of the viewers, looks for the most shocking and controversial information. And when information and facts are slow to come by, how conjectures and innuendos drive the narrative from bad to worse.

There was an easy, practical reason for the swing in the coverage, of course. It was pure logistics. Some of the channels had certain pundits and talking heads on speed dials; men and women in suits and dresses who could pull into the studio parking lot within minutes of being summoned. The ones who showed up shaped the coverage.

It was a matter of standing out, and everyone took vicious steps to do so. Not only were the same facts not repeated, once the number of diverse facts that could be stated ran out, they began stating alternative, fictional facts. Soon these facts coalesced t form a narrative, one that morphed according to the tastes of their assumed audience and most prestigious advertisers, until two hours after the shooting, the five biggest channels in the nation, had five different takes on who committed the mass shooting, why and how.

The author builds up the suspense as the story progresses and the final twist to the secret is interesting. Not to give you any spoilers, but you can guess it if you know where the inspiration for the book’s title has been derived from. This section will remind you of multiple films made in recent years, and how the author wants to change the perspective on the events in those films.

The book could have been much better read with some editing and rearranging of some of the chapters in terms of sequencing and timing. There are also some typographical errors, which is not uncommon with self-published books.

Overall, a book with a combination of contemporary crime problems and an interesting take on how events turn into disasters, if you have a few hours to read a crime thriller…