Some people are born with so much talent that they achieve scintillating success in whatever form of art they practice. Satyajit Ray is definitely one of such artists. While his international fame is linked to the movies he directed, we are also big fans of his writing. He has given us characters like Feluda and Professor Shonku. He also edited the children’s magazine Sandesh, which was started by his grandfather. He was also a brilliant illustrator, as you would see further down in this post.

A lot of his writing is in Bengali. In the last few years, Arunava Sinha has translated some of this works and we hope for this process to continue. We think stories like On the Run with Fotikchand, Two Magicians and Adventures of Feluda are excellent works for young readers. And here is another collection of four stories to add to your vacation reads: The Magic Moonlight Flower and other Enchanting Stories.

While a book cover is very important element of the book it belongs; it is not easy to design it. The designer(s) needs to elaborate elements of the story on it and at the same time, they need to make it attractive too. Considering the primary readers of this book are young adults, the cover page has to be imaginative. 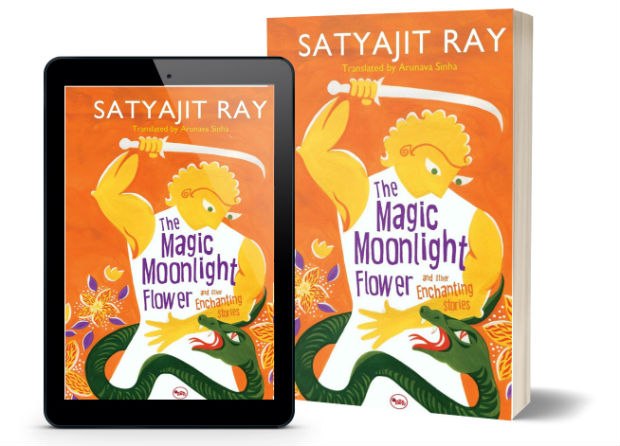 As you can see, elements from one of the stories from the book are explored on the cover page quite interestingly. The designer has chosen comparatively cheerful colors for the background. In front of the same, you can see an illustration of a young fellow trying to slay a serpent. The book title is written on the T-Shirt like an upper garment of the slayer. The only thing you can find out of focus is an eye of the young fellow.

Overall, a moderately good cover page, which could have been better.

This collection comprises of four stories of magic and moonlight, of beasts and birds, of ogres and princesses:

Sujan Harbola, the Boy Who spoke to Birds

From the days of his childhood, Sujan is attracted to bird calls and has an uncanny ability to mimic those. So much so, that his father gives up any hopes of Sujan looking after his grocery business. Instead, Sujan grows up to be a Harbola.

Harbolas can imitate the sounds of different birds and animals. They make a living by performing their mimicry for audiences.

When visiting the forest of Chanrali near his village Khira, Sujan very cleverly saves a tiger from being hunted by the king. Now, the king has a lovely daughter – princess Srimati. This lovely princess has never seen the sunshine or anything else in the world. All her world is inside her room and with her books. She is going to be married to the Prince of Ajabpur soon.

The king invites Sujan to come to his palace and perform various bird calls for his daughter. He also tells Sujan about the monster that lives in the Akashi mountain. Flocks of birds willingly travel to the cave where this monster lives and he eats those.

After Srimati hears Sujan perform a variety of bird calls, she decides to delay her wedding, stating that she could only marry a person who will kill the avesvore – the demon that eats birds.

Can anyone defeat this scary monster?

We meet Gangaram as he is skipping flat pebbles in the river and he finds a beautiful stone. So far, his life has been average as he grew up without his parents in the small village of Bainkuntha. He lives with his uncle Gopinath and cultivates a small piece of land. He may not be rich, but he is kind-hearted, uncomplicated, handsome and well-loved in the village.

The stone, however, brings good luck and fortune to Gangaram and this is noted by everyone including his cousin Raghunath.

Raghunath consults Aghor baba to find out the reason for this sudden turn in Gangaram’s fortune. Aghor baba tells Raghunath about not only the “Seven veined” good luck stone, but also about the other hidden fortune. And so, Raghunath engages his thief friends to steal the stone.

Meanwhile, Gangaram hears the advertisement by the Princess of Kanakpur having lost the stone. The good-intentioned Gangaram immediately sets off on a journey to return the stone.

What will happen to the Gangaram’s stars without his good luck stone?

The Ogre and The Princess

Young, handsome and happy-go-lucky Ratan’s heart is stolen by a beautiful princess in the fair of Shimuli, as they see each other with a flute playing in the background. But a village boy like him can only dream of the princess in the real world.

Fate, however, has other plans. One Sunday afternoon, an Atithi comes to Ratan’s house. Lo and behold, Ratan upsets this Durvasa like personality and is cursed to become an ogre. 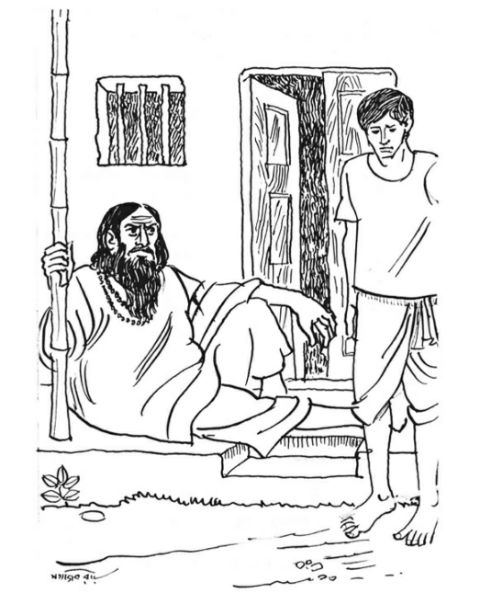 An Illustration From – The Ogre and The Princess

Ratan approaches astrologer Narahari to find a way out of his plight. Although his ordeal cannot be delayed, Narahari ensures Ratan that it will be only for a short time and he’ll become human again.

And, so Ratan goes to live in the forest of Jhalsi and he had eaten his way through the forest he went on to the kingdom of Dignagar. Here, he meets Prince Chandrasen who is out hunting. Prince Chandrasen tells Ratan about the man-eating-monster that has appeared in a cave in Dambori hill.

Ratan goes to Dambori Hill where the prince and the soldiers have gathered to fight the monster. Ratan watches from sidelines for a while, but humans are no matches for the monster. Soon, it is time for Ratan to fight.

Will Ratan win the fight with the “man-eating-monster”? And will he ever become human again or meet Princess Lakshmi?

Seventeen year old Kanai‘s father Balaram is suffering from a rare disease of Miseria. He’ll die within fourteen days unless Kanai obtains the juice of Moonlight leaves for him. This plant, also called Lunani, is only seen in an ancient abandoned temple in the forest of Badra.

Without delay, Kanai sets out to get the juice. But, when he arrives at the temple, he finds that the plant has disappeared. He meets a hundred and fifty six year old man here called Jagai Baba, who knows everything, but can’t remember most of it. He tells Kanai that the weavers in the kingdom of Rupsha has also got Miseria and so the king of Rupsha has taken the plant away. Kanai hardly knows how he’ll travel to Rupsha, obtain the juice and return to his father in good time.

But, Jagai Baba gives him three round objects – one red, one blue, one yellow. There is also a sea-shell through which Jagai Baba can talk to Kanai over remote distances.

By eating the red fruit, Kanai is able to run thrice as fast as a deer. So, he sets off for Rupsha. When he comes to the city though, he finds that the king has not cured any other weavers.

Where is the magic plant then? Will Kanai succeed in saving his father?

One of the main attractions of a Satyajit Ray story for me is that “old-world” feeling before electronics became such an ingrained part of our life. It reminds me of the time when children had the luxury to fantasize about magic, supernatural forces and believe in stories where the animals had a lot to say. Our daily life was so in tune with the forces of nature that we didn’t feel this big isolation with everything that is not either human or created by humans.

Nature teaches us to be intuitive, to be kind, to use our brain and our minds to explore without inhibitions that come with growing up and with bookish learning. And the best learnings are still what we learn by observing the natural forces around us. There is a huge difference between watching a peacock on a television screen or in cartoons, in a zoo, or in its natural habitat when it dances on the arrival of rain. As the author says:

There was a time when our water ways were completely unpolluted and the rivers ran sweet as honey and clear as glass:

As the water was clear as glass, all sorts of stones – red, blue, yellow, russet – could be seen beneath it. There was one stone which had every possible colour in the rainbow and was shaped like a pigeon egg.

But everything passes and human life is too short to judge the changes. There are also tremendous advantages in being alive today as we have access to such fabulous books through kindle, right?

Satyajit Ray‘s stories also always have a good balance of education and entertainment as he weaves some deep concepts in some very simple sentences:

Who knows how fate works? It is true that God has smiled on me, but I cannot say why.

There is no better deed on earth than to serve a guest.

And there is enough of magic, scary bits and supernatural stuff here to stop it from becoming boring :):

The moonlight was indeed planted in a small island, but a king cobra had wound itself around the base of the plant. The snake was about as tall as a human. One bit from this snake would kill a man. A five-foot wide moat encircled the island, with six or seven alligators wriggling about in the water.

So if you have a couple of hours to spare and a young one to entertain, go for these magical stories…