The Last Attractor of Chaos by Abhinav Singh | Book Reviews

Let us take a look at the cover page of the book: 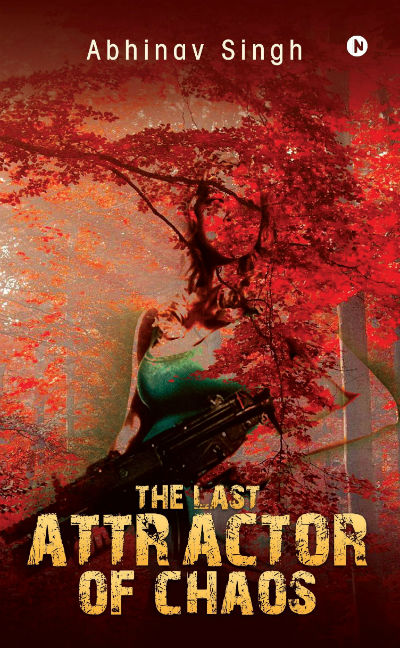 The Last Attractor of Chaos by Abhinav Singh | Book Cover

The cover page fails to create an impact at the first glance. Actually, the title of the book also doesn’t reveal much about it. It is rather confusing a little. But, once you read the book, the things will start making sense to you. The cover page is an illustration of material stuff in immaterial particles and reflecting chaos, trying to remain true to its title (and thus it’s content). I must say the cover page could have been better and there can be a better book title.

Let us take a bird’s eye view to the book content:

It all starts during the thrilling and chilling moments during a covet operation (or rather a mock operation) by Indian Armed Forces. In order to check the security of some important things being carried away from one place to the another, a team is assigned the work to intercept it. Such mock drills are common and even in the civilian areas we see such drills by Fire-brigade or at the airport or even in schools. This however is at the bigger canvas and level.

Mahesh Mehta is one of the team members. Actually, he is from the Intelligence Bureau and he is an expert hacker. His skills in the information technology world, especially the cracking ones, are responsible for his place in the team. He is considered as one of the best in the department.

The team was able to complete the drill and eventually the things started taking the shape which Mahesh found somewhat odd. He suspected that it was not a mock drill but actually the weapons which require highest level of security code for everything (from operating, transferring and even launching) is stolen by some shady characters, and he unknowingly became the part of this theft (if you can call it mere theft).

He overpowered the armed officer and ran away to be found dead near BT station!

Shruti Rathore is the last person he made a contact with.

Shruti is doing a desk job in IB is married to Ashwin Rathore, and intelligent fellow who was once the topper in his academics and had a chance to work with one of the top brains of the country on some secret project. His knowledge in physics is exceptional. By the way, it is Ashwin, whose simple persona, brilliance and caring nature who made Shruti (who was leader of the security team assigned to protect Ashwin!) made Shruti to fall in love with him. They got married and now Shruti is six-months pregnant.

The things took unexpected turns and Ashwin was killed in a car accident. It was a murder and the target was not Ashwin, it was Shruti!

Actually Ashwin’s physical body got dead, but soul still remain there with his meta-physical existence. His love for his wife and the baby to be born, kept him somehow. So he is dead but still exists in a way that no one can see him nor he can perform any physical actions! He meets with someone mysterious, Tantunam Anuha, who claimed that he is sent by “the Elders” to help him!

Who tried to kill Shruti and why? What was stolen during that covert operation Mahesh Mehta is involved in, and why? And by whom? Why Mahesh contacted Shruti? What was the past of Shruti? What was the past of Ashwin? What will Ashwin do now? And, how? What will be the future of all these characters, the stolen thing and the country? Well, you need to read this interesting book to explore the course of events to get your answers 🙂 .

The unique writing style of author makes this spy thriller an interesting book. If you love thrillers, this fiction is something for you.The way the author thought of weaving the paranormal stuff into the story is something unique and interesting. This idea is like a two way sword, some may like it and some may not. However, the book, never underperforms in terms of providing thrills.

Another positive point of the book which will surely grab your attention is, the strong characters explored in it. As the story moves ahead, one by one layers of the respective characters opens up. Shruti’s character is the fantastic example of how you can show women empowerment. I often say that many of the authors have wrong idea about gender equality and women empowerment. Having extra-marital relationships, habits of smoking and drinking and the length of the cloths has nothing to do with women empowerment. It is all about believing in yourself and doing hard work to achieve the planned target. And yes, each human being must be provided the equal opportunity in unbiased manner, regardless of age, gender, cast and other attributes. Shruti is a strong woman who made her way from living the parent-less life in orphanage to getting respected job in the intelligence bureau.

Same we can say for the character of Ashwin. He is not born with a golden spoon in his mouth. He cracked one of the toughest exams and proven his talent beyond his studies. His research work earned him the respect from the most clever minds of the country. And, when he found his life became monotonous, he has guts to leave everything and get back to the normal life. The way Ashwin and Shruti are committed to each other is something remarkable. So what, if there are some secrets which are not shared between them! Nothing is more important than their respective spouse for both of them.

Be it Mahesh Mehta, Army officers, Shruti’s friend, Mehta’s daughter, Shruti’s recruiter, Ashwin’s recruiter, the underworld guy or any other character, they all are explored well. I am not revealing more details here just to keep the spoilers away.

The pace of the book is set from the very first scene and it remains the same throughout. Of course, there are some slow things come during the way, but its ignorable. The end is also something you may be a little disappointed with. You may expect the stuff should result in the better way after all this chaos. But, the end is not disappointing either. The way the story concludes is interesting.

The author is good at literary qualities. For example read the following line which is uttered by an operative during a mission while waiting for the action.

We’ve been waiting for hours in this godforsaken place and I’m not getting any younger. When do we get to see some action?

The author makes sure to write the stuff in a way that reflect the environment of the respective scene(s).

When we are in a war zone, win or lose, there is only one rule that we follow – never leave a man behind.

We are soldiers Shruti. We follow orders and don’t ask questions. We are here to preserve democracy not live by it.

He was more valuable to me in the field than in jail.

And here are some of the interesting lines where you can find the sarcasm/philosophy implanted.

“So evidently we came to rely on human nature to finish the job.”
“What? How can you rely on humans for their own destruction?”

“No, I don’t have the balls and neither do have to worry about having them,” she countered, her tone getting bitter with every word.

A human’s will is a powerful emotion secondary only to love, that causes any reality to exist.

Loss of love is more painful to a male ego than the loss of privacy, a lesson that I learned the hard way.

The author is good at exploring emotions without getting melodramatic:

There was disrespect in his tone that hurt her even more than the cold.

Tears are misconceived as a weakness, but they are a woman’s biggest strength and weapon.

The line between killing for justice and killing for gratification is very thin and we are here to assess that you are on the right side of that line.

For any state or country, one of the biggest challenge for the administration is explored in matter-of-factly way:

The biggest question was yet to be answered. Who would control the nuclear trigger – the civilian leadership or the Armed forces?

Despite all these good stuff, the book has some printing errors as well, like:

When you sleep you conscious brain rests and subconscious takes over. These are moments when we feed your brain with auto-suggestions about the things you can do and you cannot.

Also the fonts in the book are quite small and it could have been a better reading experience with a little bigger fonts.

Author’s knowledge of science and love for nature, and the way it is weaved in the writing is another positive point of the book. The way the author keeps himself away from writing adult content (which is a fashion these days) is something to be appreciated.

Definitely a good book for the thriller lovers. It is a no-nonsense, fast paced thriller with strong characters. A better book cover and little bigger fonts could have been made it even better.