Like most bookworms who start in childhood, we also grew up on stories filled with magic and fantastical fairytales, and somehow that affinity for books targeted at young readers have remained with us. If you think about it, most of such books are filled with a lot of fundamentally valuable moral lessons for young minds and so there is a lot more to them in terms of complexity and contexts when you go past the surface value of the story and look for the core messages.

And so we keep looking for such writers and follow their work on a regular basis. One such author is Australian writer Garth Nix, whose Abhorsen series we have read and reviewed on this blog.

And today we are talking about yet another series by him called The Keys to the Kingdom, consisting of seven books published between 2003 – 2010. What tipped the scales for this series to make it to top of the reading list was that these are available in form of terrific audiobooks, which make it so easy to listen to them while on the move.

The series consists of: 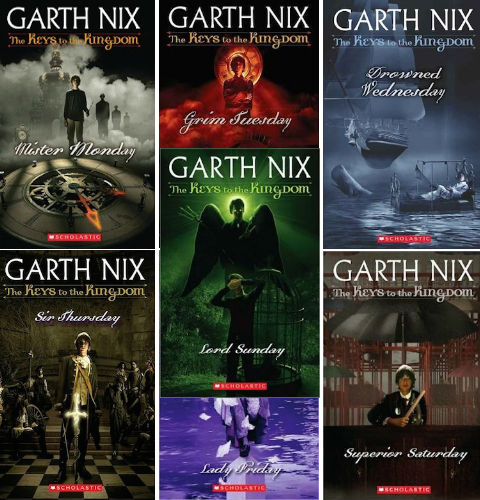 The Keys to the Kingdom by Garth Nix | Book Series

By the way, if you want to know more about Grath Nix, you can visit his official website:

The prologue tells us about the Will and how it escapes from its prison on a remote, isolated, stand-alone star.

We meet 12-year old Arthur Penhaligan, an asthmatic boy, who is as happy as the kid-next-door can be with a medical condition, but a wonderful adopted family that love him dearly. By chance or luck, whatever you would like to call it, Arthur’s path crosses with that of the magical realm of the Morrow Days and he is christened the rightful heir of the Architect and his life is never going to be the same again.

So, once upon a time, the Architect created the House – the centre of the Universe – and everything else in the universe around it. This House is divided into regions called the Lower House, the Far Reaches, the Border Sea, the Great Maze, the Middle House, the Upper House, and the Incomparable Gardens. These sections are ruled by – in that order – Mister Monday, Grim Tuesday, Drowned Wednesday, Sir Thursday, Lady Friday, Superior Saturday and Lord Sunday.

The problem is, though, that these people were not supposed to become rulers. They were supposed to be the guardians of the Will of the Architect. Instead, they divided the Will into seven fragments and ensured that it never comes together. Each of these rulers holds a key which gives them the power to rule their respective reign.

But, once part one escapes, and Arthur becomes the rightful heir, he is forced into making the terrible journey to the House time and again – or every day of the week :)- until he re-unites the will and holds the seven keys together…

Now, no one is going to give up their rule that easily and Arthur is only a boy, so each journey is filled with perilous adventures and absolutely fantastical in nature…

More importantly, Arthur has no way to know if the final outcome of his journeys is going to be the right thing for the Universe, or will he actually end up destroying it all?

From the reader’s point of view, it is a marvelous journey filled with tales and symbols old and new, with a brave boy who finds he has makings of a hero in him after all…

As his friend says:

Arthur may not be the brightest, or the finest, but he is always up for anything…

And that is one of the essentials to enjoy this series – being up for anything. If you are happy for the metaphors to blend and things to shift and change all the time, and enjoy a good fantasy, this series is for you. It takes references from tons of other published literature including the Bible (Keys to earth and heaven, the seven sins), the Pied Piper’s tale, the mariner’s tale – just to mention a few. But there is also subtle humour here that makes fun of stereotypical notions and obsessions of our world – like its bureaucracy.

There is the Comp-Leat atlas of the house, and the omnipresent Nothing, and the Fletchers, and denizens and Nithlings and raised rats and plenty more creatures who show up as the story progresses and each one of them brings a new aspect to the story. We journey under the land, over the seas, into the space and all imaginable dimensions through the space including the Improbable stairs. It has all the makings of other adventure series like Chronicles of Narnia.

Like I mentioned earlier, I started on this series because they were available in audiobook format and once I started, I had no reason to complain. Allan Corduner makes the reading/listening experience really enjoyable with the right accents and voices for these imaginary and yet familiar characters creating an extraordinary world for the readers/listeners.

The audiobooks are available in CD format on Amazon India, but they are pretty pricey. So, I would recommend using either a library or a phone app, which might give you access to these for free or little money. I used the Bolinda Borrowbox app.

Other options include Overdrive:

Some of these books are also available on Youtube for free.

Apart from the entertainment value, which is high, the book is also filled with Arthur’s fundamental struggle with power that he didn’t ask for and as Mister Monday hints in the very book – the very nature of this power is going to change and define who Arthur is and will change his life irrevocably.

All in all, a lovely, entertaining, fantastical tale that is filled with lots of nuggets of wisdom… a perfect reading for you and your young ones…

Previous: Moment of signal by Sreedhar Bevara | Book Review
Next: Madness Of The Monk by Anuj Tikku | A Short EBook | Personal Review