The literature-loving team at Thinkerviews is always looking for books that receive the love of the readers and become popular. This includes books published by writers with Indian roots, no matter where they publish their books in the world.

Some of these books are loved purely for their exotic quotient i.e., they highlight the exquisite and colorful cultural traditions as well as problems like caste systems, while some are centered on the effects of the immigration process on families and the mixed cultures they thrive in.

We have reviewed works of both nature here:

Recently we came across the debut work of author Alka Joshi – The Henna Artist. Published by Fiction HQ in 2020, the book is gaining popularity and making its way through the selling charts in USA. We liked the premise of the book and decided to add it to our reading pile. And here are my views on the book for Team Thinkerviews. 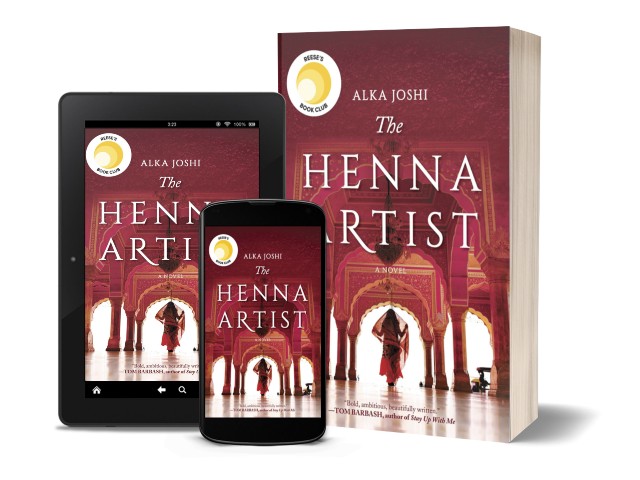 The book cover for this story set in Jaipur features a very inviting colour scheme and a woman walking through the palatial corridors. She looks very much like a dancing girl ready to attend the Mehfil of Maharajas. The cover page is interesting and inviting and also highlights the Indian factor to the non-Indian buyers.

The Traveler has to knock
at every alien door to come to his own,
and one has to wander through all the outer worlds
to reach the innermost shrine at the end..

It is September, 1955 and in the small village of Ajar in Northern India, Radha anxiously waits for a letter. A letter that is her only link to one surviving family member – an infamous older sister who turned away from the traditional fate of married women and travelled to a far-away city to make a life of her own.

This older sister is Lakshmi Shastri – a 30 year old Henna Artist with access to rich and famous households of Jaipur where she paints the hand and feet of women with her mehandi, provides herbal remedies disguised in sweets and savories and also provides much needed help to women with unwanted pregnancies and men wanting contraception for their mistresses.

Lakshmi has worked hard for years and toed many lines to build and maintain her business. She is very close to achieving a long-cherished dream – building a house of her own. She has been sending money to her parents for years and requesting them to come and live with her in Jaipur.

So far, no response. Lakshmi doesn’t know that her parents have died. And then one evening her ex-husband Hari shows up, with Radha in tow. Lakshmi didn’t even know she had a younger sister. Excited and afraid, she gives money to Hari to send him away and takes Radha into her home.

But having the responsibility of a beautiful, willful, thirteen year old girl, while trying to negotiate the delicate lines of the society around her proves more trying than she could have imagined.

While Lakshmi is treating Maharani Latika at Jaipur Palace for her depression and secures a place of Radha at her school, she thinks she has secured a future for Radha that will bring her education and success. Unfortunately, Radha’s longings have set her on a path that brings ruin to Lakshmi’s business and the life she has built in Jaipur.

Will she stand by her sister at the cost of losing the life she has built?

On the plus side, I enjoyed the writing. Alka Joshi pens this story of a self-reliant, independent woman so beautifully that it is hard not to get drawn into the beauty of the Jaipur of those days and the inherent beauty of the life in India – its fragrances, its colors and its customs. She creates this world and brings it alive with her depiction of rich women of Jaipur and the intrigue of these circles. I especially enjoyed the segments featuring the royal family – both the elder and the younger queen fighting their own internal battles and descriptions like that of Grih Pravesh at Lakshmi’s new house.

The characters are richly detailed and it is hard not to fall in love with Lakshmi. In spite of sometimes wanting her to behave differently from her impulsive nature, the reader will get drawn to here endearingly imperfect character as she falls and gets up again and again on her way to independence. While the women of the high society of Jaipur can be fickle, some other members of this community are there to help her.

I used to pray to my namesake, Lakshmi, the Goddess of Beauty and Wealth. Maa loved reciting the story of the Brahmin farmer who offered his scythe, his sole possession, to the goddess. In gratitude, she gave the farmer a magic basket that produced food any time he desired. But that was only a story, as true as any other Maa told and, at seventeen, I turned my back on the gods, just as now I turned away from Ganesh’s shrine.

She is intelligent, observant and a very quick learner. The art of painting she learnt in childhood and later perfected with mehandi while working in Agra, while the healing knowledge has come from her mother-in-law during her short and unhappy marriage. A village girl, she has learnt to maneuver her way through the high society of Jaipur from experience and some of her observations about this society tell us a lot in very few words:

The tea set was the kind the English loved, depicting women in corseted gowns, men in pantaloons, curly-haired girls in frocks. Before Independence, these objects had signified my ladies’ admiration for the British. Now, they signified their scorn. My ladies had changed nothing but the reasons for their pretense. If I had learned anything from them, it was this: only a fool lives in water and remains an enemy of the crocodile.

What Indian woman, no matter how wealthy, wouldn’t try to bargain? If she didn’t, she’d come off as a fool, easy prey.

But as her only teacher has been her own life experiences, she has also made a lot of mistakes on the way. Only when she is charged with responsibility of a family member, does she realise how self-driven her life has been so far. That’s when she loses everything she has worked for and decides to take a new path:

What light work I had made of infidelity, for him and his friends to cheat on their wives for ten years! I’d helped them discard their mistresses’ pregnancies as easily as they discarded the lint in their trouser pockets. I had justified it by treating it as a business transaction. To me each sale had been nothing more than another coat of plaster or another section of terazzo for my house.

Success was ephemeral – and fluid. It came, it went. It changed you from the outside, but not from the inside. Inside, I was still the same girl who dreamed of a destiny greater than she was allowed.

While I like the story and the characters, there are little errors in the book related to background featuring India. There are also Hindi words misspelled in English as their pronunciation in North India would not have been as per these spellings.
For example, the rhyme that the sisters recite:

Also, words like Nautch girl, bheti, Munchi-ji, bheta, etc. are not spelt like these would be said in Hindi. Lakshmi also calls her mother-in—law ‘saasuji’ sometimes and sometimes ‘saas’. The contractor working on Lakshmi’s house is Narayan, but on page 188, his name is spelt as Naraya.

The author also gives us glimpses of facts of life of that era including the onset of corruption as the infrastructure of young India started getting built, the huge divide between the rich and the poor e.g., the rich go away to escape the summer heat while the poor make do in very small amounts of money, the never changing family dynamics and rich brats getting away with their mistakes, all of these makes the story stronger and more intriguing.

All in all, a dreamy book featuring a young woman in post-independence India, building her life on sheer talent and hard work, discovering herself and her family on the way….

There were three kinds of Karma: the accumulated karma from all our past lives; the karma we created in this life; and the karma we stored to ripen in our future lives.