Posted by: Editor February 19, 2019 in Books, English Leave a comment

Frederick Forsyth has entertained the thriller lovers since his ground breaking debut with “The Day of the Jackal” in 1971, and has a worldwide fan following that is always ready for whatever new adventure he is working on. At the age of 80, he is still the writing star and has delivered another bestseller – his seventeenth book called The Fox.

We enjoy reading Frederick Forsyth books and have shared our views on some of his stories on this blog before:

So we also picked up The Fox with a lot of enthusiasm and here are our thoughts on it.

Published by Penguin Random House UK, the Fox has a “not-so-cheerful” cover page. We see the grey miasma covered world of London as well as Eastern Europe with a sniper’s sight target focusing on the blood red Fox. 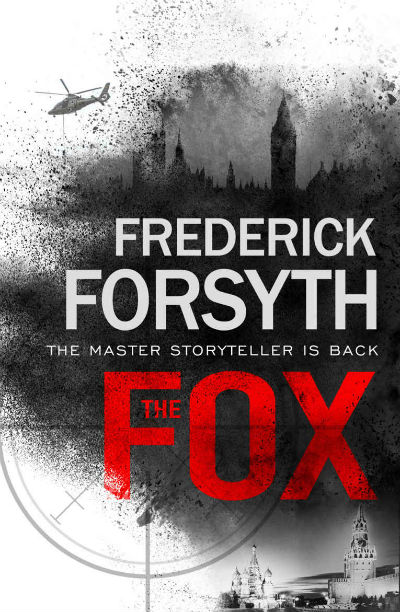 It gives an impression of the dark forces of the world trying to erase a dangerous weapon – or as the blurb on the back cover claims – an eighteen year old boy – who is both the weapon and the target..

With this cover page, the drawing power on the readers will be the author’s name more than the imagery.

Now this is no “once-upon-a-time” story and you know it right away – straight from the special forces invading a middle class household in the suburbs of an English provincial town of Luton, with an attic full of computer hardware that any normal teenager lives with. And as the arrests are made and background stories flash, it is all too easy to recognize the contemporary British Prime Minister Marjory Graham, the billionaire American president, the ex-secret-policeman head of Russia, and I think in my head I gave them their real life names without a conscious thought to it 🙂

Soon you are drawn into the story as Sir Adrian Weston – the ex spymaster – and the hero of this tale comes in. The arrest we mentioned above included the Jennings family – father Harold, mother Sue, elder son Luke and younger son Marcus. Luke has Asperger’s syndrome, but also almost surreal ability to hack through even the most secure databases in the world. He used this ability to peep into the American security databases and now Americans want him extradited and imprisoned. But from Luke’s point of view, all he was trying to do is show them where they had faults in the system. While Britain certainly doesn’t want to defy America, they can’t also hand over a teenager into their hands without protecting his social rights.

And here Sir Adrian steps in with a plan – he convinces both governments to sanction Operation Troy, wherein he proposes to use Luke as his master weapon. Nicknamed the Fox, he will be hunting for the doorways to control computers remotely, and give allies Britain and America to plant Trojan horses in security databases around the world.

And so the Fox’s official career begins. He proves uncanny and invaluable as he helps Britain stop the latest Russian behemoth fleet career Admiral Nakhimov in its tracks in strait of Dover.
This is followed by penetration of Iran’s nuclear program databases leading to destruction of its uranium refining facilities.

And an equally exciting thrill as North Korean test missile implodes on itself and destroys its mountain abode from within.

But of course not all of it is without peril. Sir Adrian’s Russian counterpart Yevgeni Krilov is continually on hunt for Luke. And as the book progresses, the Russians murder Luke’s father, kidnap the daughter of the British Home Secretary’s personal secretary Robert Thompson, so he’ll betray Luke’s location, send the Night Wolves to murder Luke’s family at the Chandler’s Court. When this first attempt is unsuccessful, the Iranian’s try the same thing at Eilat in Israel and confirm they wiped out the Jennings.

However, since Sir Adrian is master of deception and trickery, the Russians seem to be always a step behind. Until the end, when they send legendary sniper Misha to take the boy out from his latest home at castle Craigleven in Scotland.

Will the Hunter get the Fox?

This is a Frederick Forsyth book through and through – meaning all the details about how government agencies, armed forces and internal machinery of any bureaucracy works is on full display. How all these government servant interface with each other on international scale are thoroughly detailed, which is his trademark.

Like I mentioned before, all the politicians are peg-on and the central theory does have a credible fit for the current world scenario. The book proposes that the world is once again facing a situation where a trio of ruthlessly dictatorial rulers – Russia, North Korea and Iran – are dangerously close to access to nuclear weapons and they are holding the world hostage. The fanatic terrorism including suicide bombers is still very much in existence, but the cyber warfare – led by Russia – is taking it all to a new level for the West – especially Western Europe and USA.

Amongst the three dictators – the Russian one’s strategy is to dominate the western world through being a sole provider of its energy sources including Natural gas, while he also continues the cyber attacks and armed invasions through Eastern Europe. The north Korean dictator is fooling the West in believing that they have destroyed their nuclear capabilities while holding onto other hidden ones, while the West supplies them food and energy. None of these are too far-fetched from world-wide speculations on the events that have taken place in last few years.

The Fox is not really a typical thriller featuring one hero striving towards one goal. It is a cluster of events where an ex spy-master is providing puzzles for a young man and then passing on the solutions to different hands to inflict entirely different sort of strategic damage. And because it is a cluster of stories, there is sometimes the repetition of a few bits and historical references. Since it is not a quest reaching for a target, the end can hardly be called anti-climatic, although it does feel a bit co-incidental and convenient.

But the Frederick Forsyth books are about the journey, and there are enough tracks in the story to keep the thrill and the drama alive, making it a very enjoyable read. It is all about moves and countermoves, trying to be one step ahead of your hunter or the quarry, create deceptions that are real and try to lead by misinformation in this world of smoke and mirrors. And the book provides you plenty of that as it moves from Britain to USA to Russia to Iran to Israel and their loyal spies, traitors, politicians and armed forces.

I have always admired the author’s observations and perspicacity around human nature and the whole functional side of any government and this books also doesn’t disappoint where he displays his sparkling insights, whether it is about the politicians or about the chessboard of espionage:

Politicians seldom have to be convinced of the need for caution. There are medal awarding ceremonies at Buckingham Palace, but they never involve politicians.
— — — — — —
Most politicians and far too many civil servants possessed personal egos of Himalayan proportions. Such vanity could permit self-delusion with little harm done other than expenditure of huge sums of taxpayer’s money to no purpose. Government waste was a fact of life. But if you indulge in self-delusion on a covert mission in the heart of an enemy dictatorship, you can end up very dead.
— — — — — —
In that strange dance macarbre that is espionage it Is common for the agents of opposite sides to attend embassy cocktail parties – conversing, beaming, clinking glasses and pretending to be all jolly diplomats together, while behind the mask privately intending to outwit and destroy the opponent.
— — — — — —
In the spy world, they all know each other. Across the great divide, they study one another as chess masters pore over the tactics and characters of the players they are going to battle at some future table where the weapons are queens and pawns.
— — — — — —
The world of espionage has its darker side, but in a thoroughly imperfect world, it is necessary if the safe and free were to remain safe and free.

And in the six decades of Frederick Forsyth’s writing, a lot may have changed, but not everything…

“Anger clouded judgement, defeated logic, obscured clarity. When things went wrong, an intelligent man needed all three.
— — — — — —
On modern planet Earth, decency is something to which only a small minority still holds.

With 22 chapters, the book is a quick read, and a very lively one…

The book is also available on Bolinda Audiobooks – both as CDs and through BorrowBox App.
Read by David Rintoul, it is an absolute delight. I loved the way he does the voices & accents and takes his time to read, making the characters and sequences come truly alive.

I enjoyed every minute of the 8 hour 13 minute run time and can recommend it to anyone who would switch the music on their phones for a story while they are on the move.

The Veteran AND Other Stories by Frederick Forsyth | Book Review