Historical fiction is one of the more entertaining way to explore historical events, watching them through the perspective of people living in that era, and understand the complex social settings of their times. Author Sujata Massey‘s latest series of books featuring a young woman solicitor Perveen Mistry is generally marketed as murder mysteries set in exotic India of 1920s. But, we have enjoyed them for their rich storytelling of adventures taking place in the cosmopolitan stage that is Mumbai.

Previously, we have reviewed the following books in this series:

And now, we have the third book in this series:

Let us take a look at the cover page(s) of this book.

Different version of this book comes with a different cover page. However illustration and its style remain common in both of them. 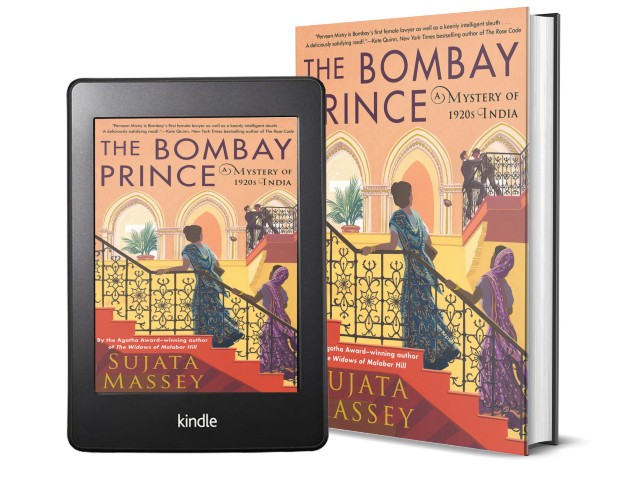 This is more detailed cover page where you see two ladies witness a crime being happened when climbing up stairs. The illustration shows two men in a duel. The illustration of the bungalow reminds you of traditional “haveli” you might have witnessed in older movies. 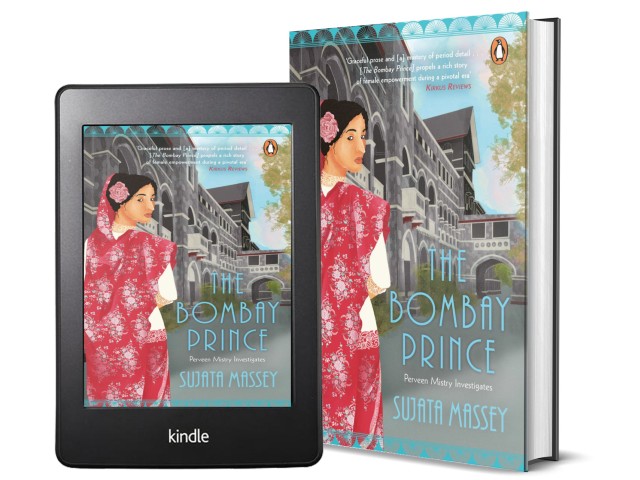 This illustration is more similar to the other books in the series. It shows a lady looking behind towards the reader and in the backdrop you see a side of a street. The houses will remind you of victorian style building in old Mumbai.

Overall, moderately good cover pages that remain in sync with the others in the book series.

The year is 1921, and Perveen Mistry is wrapping up yet another satisfactory task at work in the Mistry House, when she receives a visit from a college student Freny Cuttingmaster. Freny is a daughter of middle-class Parsi family with a father who works as tailor at the Hawthorn. Freny is studying at the Woodburn college and is now in dilemma about how to live upto her family’s expectations while her heart is pulling her towards India’s fight for independence.

Today, she is seeking legal advice from Perveen on what will happen if the students of the college refused to attend the upcoming event – Prince Edward’s visit to India. The conversation leaves a deep impression on Perveen, however, she can’t provide much solid advice.

The day of the Prince’s arrival is here. Perveen’s brother Rustam is a builder and was involved in building the India Gate. And so her family joins Rustam to show support, while Perveen takes another route and ends up with Alice, her friend, who is now also lecturer at the Woodburn college. One of the college students Dinesh Apte, throws himself at the procession, in protest, and is arrested by police. Perveen’s offer of assistance meets police refusal, but this is soon obscured by another disaster.

Freny’s broken body is lying in the gardens of the college, and Perveen is summoned to her, as it is religious custom to have only Parsis around. Soon, it is clear that Freny is gone and police arrive on the scene and take the body away for autopsy, while Freny’s grief-stricken parents are struggling to get to her.

Perveen’s mind is all in a whir, trying to place the people and events of the day that happened around her. And as she tries to get back to Mistry House, she is caught in the riots and attacked. She has a lucky escape and eventually joins her father and brother, who have decided to stay at the Taj Hotel until the violence ends.

But another surprise waits for her here. Colin Sandringham is part of the Prince’s entourage and the chance meeting leads to both of them realizing the new constraints of their situation.

Perveen and her father help the Cuttingmasters through the inquest, where it is concluded that Freny was murdered. Although, Firdosh Cuttingmaster in not pleased with Perveen’s assistance in the court.

And, so Perveen has a murder to solve, a family whose reputation may be lost due to her actions and tensions in both personal and professional lives…

Will she find her way through the maze?

I enjoyed reading this third adventure in the series as the author brings us back once again to Bombay, Perveen’s home city and sets up a murder mystery with interesting characters. The backdrop is Prince Edward’s visit to India, and the ensuing riots and violence that took hold of the City as the freedom fighters and loyalists clashed on the streets. There are multiple places where the characters in this book comment on the changing tide of the freedom fighting. But most of them have quite affluent lives working within the British systems and can’t really understand the appeal of Mahatma Gandhi’s widespread non co-operation movement.

This book reminds us again of how privileged Perveen’s life is – she has loving family, comfortable home which is managed by her mother and provides all material comforts, working partnership with her father and his continual guidance as she tries to build her career, and his care for her reputation. And still, she is vulnerable to violence on the streets, like any other woman, once she moves outside the circle of her family, who can afford to spend a few nights at the Taj to wait out the storm. The home, that with her parents’ passing, could not remain hers, and no possibility of divorce in her future and thus no hope for a family of her own:

Happiness was for those who saw possibilities in the future. All she could foresee was pain.

And amidst the backdrop of the national riots, is the single tragedy of a young woman losing her life, for being in the wrong place at the wrong time. As we see the pain of her family, the author also shows us their routine lives, the final rituals and the social framework that help through mourning. While Perveen is able to assist through this, she also finds her motivation to go through personal dangers, so that justice can be achieved:

Everyone was capable of happiness or rage, kindness or evil. The question was, how much violence was within her? She knew that if Freny had been murdered, she would wish the perpetrator to lose his right to walk freely in India.

The author shows us the inner workings of the Woodburn College – a missionary institution, its staff, the placement of women and men students against one another, its undercurrents and rivalries that make up a long list of suspects for the murder. And then there are the characters that come on stage with the Prince. One of the standout characters is that of American journalist J.P.Singer, as he brings the flavour of  yet another continent.

There is a hierarchy amongst the press – one might call it a caste system. The Newsmen coming from the Empire’s various colonies and dominions take precedence. The rest of us come later.

The book also portrays the institutions like Asiatic Society and how it encouraged dialogues and research like below:

What is social mapping?

I will begin with the marvelous city in which I am now an unabashed, enthusiastic new resident, gathering insights  from local friends and colleagues. The British have always held that the founding of Bombay came with Fort, the bustling and important administrative neighborhood around us.

Yet as we know from history, before the East India company built Fort, this was a military safe hold held by the Portuguese. For many Years prior to the Portuguese, this area belonged to the great Marathas, who might have named in Bomba, although we are not entirely certain.

Why was this place where we are so highly coveted? I am interested in the people who were here, and how the places were changed by them. For instance: How did a temple give way to a railway station, and grazing ground for cows transform into a social hub for textile traders?

While Perveen’s journey through this book in enjoyable, there are quite a few errors, e.g., Oxford did not award degrees to women in those days, but at one place in the book, Perveen’s degree is hanging on the wall, while at another place she mentions not having it. There is also geographic discrepancies about the Prince’s travel with Colin when he supposedly manages to visit a hotel and unearths an important clue.

In summary, a good installment in the series taking Perveen Mistry through another murder mystery and on quest to find the truth, in spite of facing personal dangers…

Previous: Lean In: Women, Work and the Will to Lead By Sheryl Sandberg | Book Review
Next: Aru Shah and the City of Gold – Book 4 of the Pandava Series | Book Review