Author Roshani Chokshi has created a niche for herself with her multiple series of works targeted at young adults featuring characters reminiscent of fairy tales from all around the world. As part of the Rick Riordan presents series, she has been writing the Pandava series that follows the journey of young heroines as they traverse the magical Otherworld and its expectations from the teenage girls, who have been recognized as the modern day warriors for the side of Devas. We have reviewed the first three books of this series here at Thinkerviews:

Continuing our reading journey of the Pandava series books by author Roshani Chokshi, we are now sharing the review for the fourth instalment called Aru Shah and the City of Gold. 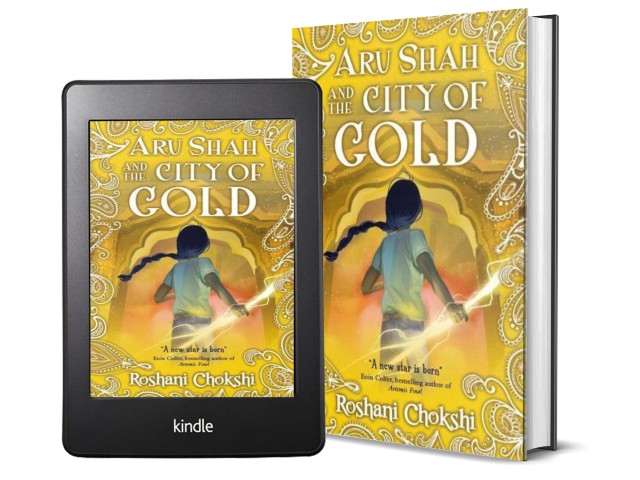 The cover page of this book appears to be fun-filled and energetic at first glance. To represent the “city of gold”, the cover page is designed by keeping “golden” as the dominant color. The protagonist is seen walking inside some mysterious venue. The praising line “A new star is born”, looks appealing too.

Overall, a cover page reflecting almost the same abstract arts on the side of the cover page, making it a “theme” for the series. 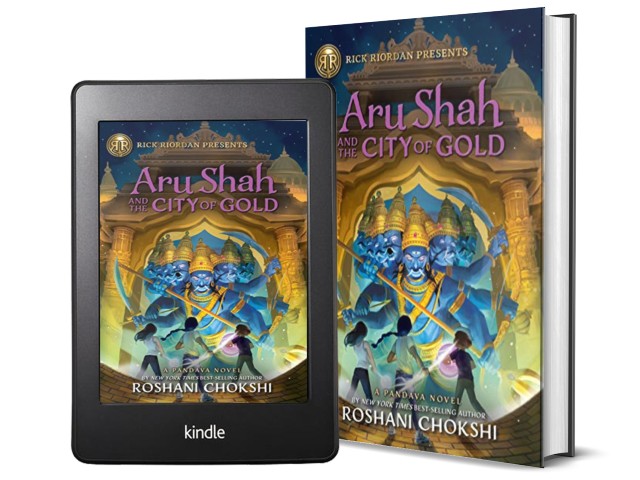 For latest Kindle edition of the book, I found this cover page. And, I liked it immediately. Not only it is more attractive, it is more detailed too.

Aru Shah made a wish and then threw herself  at the Sleeper at the end of their battle in the last book. And she woke up to find that she has a sister – Kara, who has been acknowledged by the Sleeper as his daughter. Although he erased all Kara’s memories except for last two years, which she has spent in one room.

And so now, Kara throws in her lot with her prisoner Aru and the two girls escape together. Kara has a trident called Sunny – which is almost made of sunlight and is an excellent fighter. When the girls make it back to Atlanta, Aru finds that her mother has gone away again, and the Pandavas have fallen out of favour in the public opinion.

The Sleeper’s army is about to attack Lanka in a few days. And Kubera, Lord of Lanka, has invited them to Lanka for a quest. If the quest is successful, the Pandavas will get the Nairaata army, a formidable militia that belongs to Kubera.

So, how do they get to the City of Gold? – By following the Gold roads. From a goldmine in Dahlonega, they follow the shadowy roads that lead them to the kingdom of Kishkindha and then to Lanka. Here, they fight a version of Ravana and then find that Kubera has planned three quests for them – one to test their heart, one to test their might and one to test their sight.

And at end of these quests, the battle awaits. While it looks like the Pandavas are holding their ground, they find that there is a trap waiting for them, they lose Subala in the battle and although the loss is great, they are popular again with the public as they are seen to be winning.

They are sent back to their homes to pick up the threads of their normal lives, but the war is far from over. Aru’s fifteenth birthday party brings her mother back, but she loses a sister on the same day…..

How will they carry on now?

This book is written in the same style and humorous prose that has entertained the readers in the first three books. The new adventure also comes with a tight timeline and some new characters, so that now we have almost everyone:

Yamini as Yudhisthira, Brynne as Bhima, Aru as Arjuna, Sheela as Sahdeva, Nikita as Nakula and Kara as Karna. They also have Aiden who carries the soul of Draupadi and together they all try to build a family that is dependable and loving and accepting. There are still insecurities, especially with the teenage attraction and awkwardness now that the sisters are nearly fifteen.

And so the author tries to create the mystery elements by revealing the past choices and life stories of the characters like the Sleeper and Krithika, by showing how Aru and Kara were born and how they have all come to this crossroads which seem to lead to war no matter which way they try to go. Kara is torn between loyalty to the only person she has known for as far as she can remember and her questions about her birth parents.

She’s just found out that the person who promised to take care of her turned out to be lying. She’s hurt. She just she wants to do what’s right and doesn’t know what that looks like. I can’t fault her for that.

What we know of the world are blips and fragments. The only people who can truly speak of history are ghosts.

There is a very Hunger Games like set-up in Kuber’s Lanka when the Pandavas find that their battle has been displayed in an auditorium. And there are a lot of other popular culture references including the ever present LOTR. The author keeps creating light moments in midst of all the questing and chases, while also weaving morality and good messages:

To find out whether you would choose to see beyond the forms that others show you, or whether superiority would blind you to another’s godhood.

Just because you can’t have the life you wanted, you shouldn’t give up and fade out of existence.

It is made clearer with every passing day and every adventure that their path is not as straightforward as the Pandavas had initially thought. The more they travel, the more they find that their right and wrong is changing.  They understand now that every battle they fight is going to lead to huge losses. And so, toward the end of this book, the girls decide to fight for no one else, but just themselves, to protect what they have found together.

War always destroys. That is the nature of it.

Should you try to destroy someone, you must acknowledge that in doing so, you are also destroying yourself.

If you fight with poison in your heart, you will lose sight of what you are fighting for.

And that the biggest battles is what one has with oneself and that lasts throughout the life. Hence, we need to forgive not only others, but ourselves at times:

A golden army might be precious, but a second chance with someone she loved? That was priceless.

Hope was the thing with feathers. It lifted the part of her that had been stomped in the dirt. Hope made her look out the window to  the sun rising higher in the sky. Hope might be all that they had left, but it was something she needed to cling to, because it meant that even though things were awful….They were far from over.

An enjoyable segment in the series featuring young, adventurous and courageous soul sisters trying to figure out where they should be heading..

Previous: The Bombay Prince by Sujata Massey | Book Review
Next: Doosra: The Other One By Vish Dhamija | Book Review