Posted by: Editor2 November 24, 2019 in Books, English Leave a comment

Indian mythology interest a large number of people these days. Some look at it from a historical perspective, some look at it from a spiritual perspective and some try to reimagine things and retell them. Some went ahead and wrote fictional spin-offs by taking a character or an incident from the ancient Indian scriptures. Here are some such books we’ve got a chance to read and review:

Almost more than a year ago, Khayaal Patel approached us to inform about his debut book “The Eye of Shiva“. Around the same time, he met with an accident and the release of the book was delayed a little. His corporate job also kept him at the toe. The book then renamed as Tarikshir: The Awakening and released. It got a considerable response from the readers and reviewers. The book borrows its theme from the aftermath of the final battle between Ram and Ravan.

Being a gateway to the fictional world explored within, the impression of the cover page will definitely make an impact on your purchase and/or reading decision. 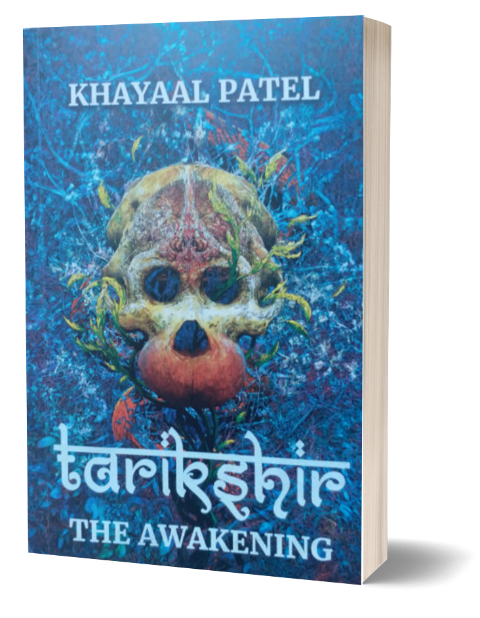 The word “Tarikshir” is a new word that includes “T R I” (for Third) and “A K S” (for Eye). The book was earlier named as “The Eye of Shiva”; so you can connect dots here. Tarikshir – as explained in the book is something evil. It plays with the psyche and the sanity of its possessor and the labyrinth of the hallucinations is almost impossible to escape. The designer must have kept this in mind when designed the cover page.

The cover page gives an impression of something ghostly approaching in a monkey-like face which is tried to blend with the same of Jack Sparrow (of – The Pirates Of Carribean – fame). I can’t say it looks impressive to me. What is your opinion?

It starts with a prologue set up in the aftermath of the great war between Ram and Ravan. The army of Sugreeva is returning to Krishkindha under the leadership of Hanuman. A foot soldier named Valikesh was one of them. He decided to have a last look at the grand palace of the vanquished along with some of his mates. His experiences there were not what he has expected!

Coming to the modern world, in the time around 1800 A. D.; the small kingdom of Devangarh was ruled by a Rajput king – Raja Ravindra Pratap Chauhan. He was a proud Kshatriya like his father and consider self-esteem as the precious most quality to preserve. His son Rudra is in his teens and is still growing up. It was not rare to participate in a battle for Ravindra.

There came a time when – Richard Walken – a British officer thought of taking over the kingdom of Devangarh and make it a part of the British empire. His meeting with Raja was not fruitful for him. He, however, was determined to do anything and everything in his power to show the might of the empire and defeat Devangarh.

What will be the course of events from this point forward, is interesting to read in the book rather than talking about it. During the course of the story, you meet Bikram, Shamsher, Duryadutta, Shen-Zou. And yes, the reference to a clan named “son of Hanuman” is also there! Will you be able to meet any of its members? By the way, what it has to do with “Tarikshir”?

The author came up with a really interesting idea to blend Indian mythology, history, freedom fight, and family drama altogether. The descriptions of Devangarh fort and Red Tiger fortress will amaze you for sure. The mention of the underground tunnels in a castle located high on a mountain peak or a monkey man scaling the walls of a fort, like a spider; and many such things will give you goosebumps. Same way, a bodyguard with a towering persona, always ready to protect his master; looks something directly taken from the tales we used to hear when kids.

A British agent, trying to seize the power of a small kingdom and the brave Kshatriya king of the same not willing to surrender it and keep the pride of the motherland intact; will remind you of reading incidents from the freedom struggle. The strange creature living inside the tunnel below the castle and the lion both remind you of many movies (like the Harry Potter series – for example). There is a young warrior lady whose fighting skills are exceptional. There is a brother of a king who was outcast a long back and lives with his group of warriors in a haunted place. A Chinese martial art teacher is also there.

Seems all the components of an interesting story are there right?

The incidents are weaved nicely. Though at places, I felt that things could have been written in a better and more convincing manner. The suspect revealed at the end may be shocking for some of the readers. I think, the author should have explored various stuff and their effects (Tarikshir, Trident of Shiva,… ) in clear words, at least in the climax. Also, some characters disappear in the climax and aftermath.

The author has infused some wise lines in the book very effectively. I liked reading them. For example:

… the only true way to win a war… is to prevent it.

Choices affect a person’s destiny and in turn, his destiny affects another’s.

… panic and fear can destroy a race faster than the actual threat itself.

The book has some character defining lines which makes the desired impact:

A Rajput was, after all, meant to stand in the light and protect the innocent; not stalk in the shadows, punishing the guilty.

Shamsher Singh believed that a person’s most powerful asset was the ability to cut down the enemy’s strength in numbers by stealth operations – that is what made him dangerous.

The book has many lines that can guide a person in a difficult time. The wisdom and life-lessons infused in the same are quite amusing.

To every lock ever made, a key is made simultaneously. So whenever we come across a problem, there’s already a solution existing… we just have to look for it…

A little understanding can go a long way. God has given us, his most cherished creature – man – the ability to feel for others, to feel their pain and joy and the power for us to share ours.

Sometimes a person has to make difficult decisions – not because he wants to, but simply because it is the right thing to do.

Just as a single grain of rice can tip the scale, a single man may be the difference between victory and defeat.

When there is a threat from the outside, we can easily detect and deflect it. But when a threat is growing from within, what can we do to detect it, let alone defeat it.

There are some funny conversations that remind you of watching a James Bond movie. You can find humour, satire, thrill and many other feelings weaved quite nicely in many such lines. For example

“Who’s in charge now, huh?” Rudhra was babbling out of fear.
Sadly, all it took the lion was a swipe and the stately wooden chair was immediately reduced to firewood.
“Okay, so you’re in charge,’ Rudra mumbled while looking at the legs of the chair left in his hand.

Fought for peace… isn’t that ironic?

… in our line of work, it’s always better to be lucky than good.

Some characters are explored really well, the king, the queen, the prince, and the king’s brother; are them. Richard Walken’s character is also explored interestingly.

The thrills you can witness in the prologue again appear in the tunnel scene. The library scenes are also interesting. You will enjoy reading the notes from the diaries like the protagonist. There various scenes where the protagonist is saved very closely, they will give you the thrills too.

The author has a good vocabulary and he tried weaving things quite well in the book.

A good thriller which could have been much better with some elements explained properly and clearly. Some characters are really well developed. If you love thriller, you will enjoy reading it.

Dance in the Rain by Shreya Dutta | Short Book Review