Posted by: Editor January 30, 2020 in Books, English Leave a comment

The genre of crime fiction is plentiful when you look at the number of books published worldwide in any given year. And so it is with many authors that they create a series of stories featuring the same characters once the readers have bonded with those, whether it is Sherlock Holmes, Hercule Poirot, Byomkesh Bakshi, Feluda or countless other such names. Authors like Tom Clancy and Robert Ludlum have even started franchisee where other authors work with their characters like Jack Ryan and Jason Bourne.

It makes sense from not only the commercial point of view, but also from the reader’s perspective, where reading the next book in a series featuring a familiar detective is like visiting a world they know well rather than on the forever hunt to find a new author. We tend to carry on reading all works by any particular author if we like the first book we come across :).

So following on from “A Rising Man” and “A Necessary Evil“, we just managed to read the third book in this series by Abir Mukherjee called “Smoke and Ashes“.

You can read our unbiased book reviews for the previous book in the series by following the links below:

Featuring world-weary Sam Wyndham and young idealistic Surendranath Banerjee in the Imperial Police Force of Calcutta of the 1920s – precisely December 21, 1921 – December 31st, 1921 – the book takes us on a chase of the serial murderer. And here are our thoughts on this book on behalf of Team Thinkerviews. 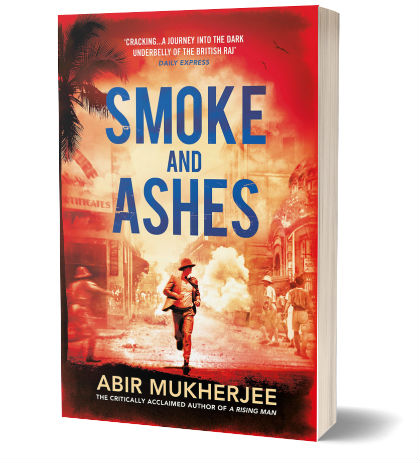 The 2018 edition features a cover page showing an Englishman in a suit, bowler hat and dark glasses running through the background of smoke and ashes – literally. The inevitable palm trees feature in the décor as well as a few circling birds of prey. The back cover shows the same image minus the running Englishman – almost like smoke and mirrors!!

It is a fitting cover for the murder mystery set in imperial days, although in my opinion, there is scope for some creative imagination here.

The book is off to a ripping start as we meet Sam Wyndham running on the roofs of Chinatown, carrying a knife and covered in blood, trying to escape Calcutta Police!!

But escape he does, and as he lives through the past night, we learn how he came to be in such a position, featuring a corpse he came across with eyes gouged out and lungs punctured. But there seems to be no trace of the events of this night left in the official records and no dead body has been reported.

Meanwhile, the political protests are at its height led by Deshbandhu Chitt Ranjan Das and his young acolyte Shree Subhash Chandra Bose. With the eminent visit of Prince Edward to Calcutta, Sam’s boss Lord Tuggart charges him with peacekeeping duties. With Sam we meet the freedom fighters and Sam learns to appreciate the subtleness and nobility of non-violent protests, he also finds it near impossible to stop them. In the end, the freedom fighters are put under house arrest.

Sam still hasn’t got rid of his doubts regarding the other night at the opium den and he finally finds the body he stumbled over during his escape. However, he is warned by military intelligence to leave the matter alone. But the case is wide open again when they find body of a nurse called Ruth Fernandes – killed in a similar fashion – in Rishra. She was a nurse in Barackpore military hospital. While Sam and Surendranath are chasing this, Sam is warned again not to pursue the matter further.

Things start to unravel though when the murderer kills third person – Dr. Dunlop. Three murders within three nights are hard to hush. In spite of the mutual dislike, it looks like the military intelligence and Calcutta Imperial Police will have to work together if they want to stop an assassination attempt on the Prince that may end up killing thousands of innocent bystanders in the process.

Will Sam and Surendranath succeed? And at what cost?

In many ways, this book is more like “A Rising Man” with the setting of mysterious Calcutta rather than the royal intrigue of A Necessary Evil. It brings back to the fore the city, Sam’s continued bafflement and understanding of the ways this world works and his ongoing fight with his inner demons. The same goes for Surendranath Banerjee whose outcaste status is getting worse as the freedom struggle continues and his friends and family find it hard to understand his motives for remaining in the police force that serves the interest of the British.

Calcutta once again is a character in itself, as the author highlights its boundaries – real and perceived, as well its idiosyncrasies:

The story is off to a thrilling start and continues to go on a fast pace as the murder toll increases. It may feel that the sections featuring the leaders like Deshbandhu C.R. Das and Subhash Chandra Bose are almost a separate track until the two stories collide at the end leading to the catastrophic chain of events. But this track also highlights the way the British saw the non-cooperation movement through Sam’s eyes and the author also shows some of the British mindset and prejudices with which Sam evaluates the Indian freedom fighters or the Indians working in the British administration system. The classic scenario of “can’t work with them – can’t work without them” with both parties unhappy in the union.

Sam‘s character is still very much the same – battling with opium addiction and depression which is damaging both his personal and professional lives. Nothing except his bloody-mindedness keeping him on the job and a clear view of his own faults and no short-term solution in site. Surendranth has his own demons to fight as he finds himself all alone in the city where he grew up, working for the motives only he understands and ongoing pressure of leaving it all for the better cause. In spite of his cynicism, Sam has unambiguous loyalty to the British, however, for Suren – determining where his true loyalty lies – is the biggest question of all.

And while they both work through the personal issues, the author also makes them carry on with the investigation, finding the clues, while scattering some gems of observations as we go through the story:

In spite of the flying start, there are times in the books where it goes a bit slack and there are a few typos here and there, but ultimately it has enough pace to keep you reading through.

There is not much humour in this tale of smoke and ashes that are left when wars are waged, except for a few chuckles every now and then. The murders are gruesome. And all the time you are aware that events are leading to a conclusion that will be very different from what Sam thinks. You can feel the gap in the thinking process of a British detective as he struggles to predict what a ‘native’ homicidal maniac is going to do next. And with that, the thrill of it all keeps the book going.

A recommended read for all lovers of mysteries / thrillers set in historical background. 8 out of 10.