Posted by: Editor2 December 9, 2022 in Books, English Leave a comment

So, there are many authors who are known for writing fantastic books in this genre are in my “to be read” list since long. Sidney Sheldon is one of them. Fortunately, I got a chance to read Rage of Angels” penned by him.


And, I found it one of the fantastic thrillers I got a chance to read. 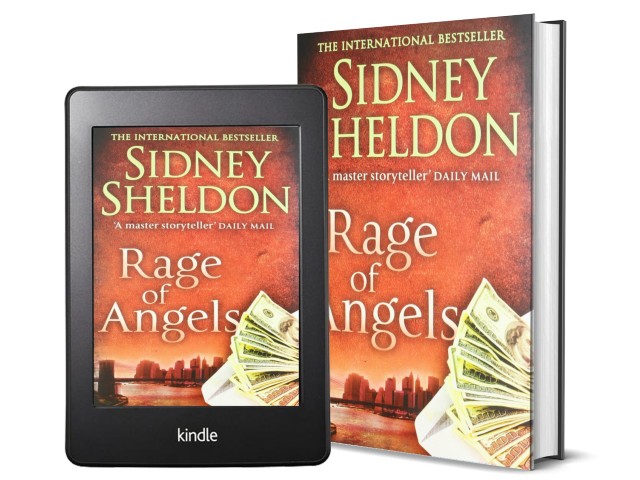 Being an entry point to the virtual world explored within, the cover page serves as a gateway. And, thus, makes the first impression of the book. It can influence a casual browser in picking up the book from a set of available alternatives. Of course, then, the story matters.

As you can see, the cover page of the book is moderately good. Considering the time it was published, it can be considered as a moderately good cover page. Today’s readers find it looking a little retro.

The modestly cheerful colors, the background with skyscrapers, the right bottom corner showing a bunch of money, makes the cover page interesting.

The sky is of shades of red/orange instead of blue, reflecting the theme of the book.

An honest to the story cover page, that may not be found very appealing by today’s generation.

Jennifer Parker is a young and intelligent girl. She has just completed her study in the field of laws. And, to kickstart her real life she decided to go to a big city. She hasn’t experienced much of the wrong sides of life, despite living in a humble background. She was hoping for a better future where in the initial phase, her goal is to sustain. Life doesn’t come easy for everyone. In fact, the situation is elaborated in the book as:

Michael Moretti is a criminal who is handling the Mafia business of his father-in-law, who is aging. He is kind of running the things as per his wish, though his father-in-law holds the final control. Michal has infiltered the core team and almost all the key position are now hold by his confidantes. One of the most faithful person of his father-in-law, still hold his position and trust of the actual boss. Michael tried to replace him, but he was indispensable. He deals in the legal matters.

So, far Michael didn’t let a loose end and have a legal case against him. Of course, he used his power to suppress the witnesses or whoever tried standing against him. But, in one of recent incident, a case is registered against him. And, he has to appear before the court. Michael Moretti is on trial for the murders of Eddie and Albert Ramos, to be precise.

Jennifer got a job in a reputed law firm. She is just a newbie, so even no pro-bono cases are given to her. Fatefully, her boss is representing the case against Michael!

It was her first field day in the court, and she caught in a soup unwillingly and unknowingly. And, the roots are in the case of Michael!

She was considered as someone supporting Michael! From TV Channels to Newspapers to street-people to law-fellows, everyone considered her guilty.

Will she be able to get herself cleared? And, even if she get her out of this soup, will she be ble to live a normal life? Well, the things are not that simple. There happens to be a series of up-downs and right-wrongs in her journey. It is better to explore her journey unfolding in the book, rather than talk about it.

Written for mature readers, this book takes you through the ups and downs in the life the female protagonist. Spread over in 64 chapters, this book is not centered only on the female protagonist. Other characters get the space and weightage they needed. It is so nicely written that the reader gets emotionally connected to some of the characters and shares their joys and sorrows in his/her mind. That is, in my opinion, the real success of the author.

And yes, while you feel for the character of Jennifer, you will also admire her for her willfulness, her intelligence, her bravery and her “never say die” attitude. Of course, she is not a perfect person, and when time comes, she also is decieved by and even charmed by others. And, those slips have their consequences.

The book contains fantastic scenes and wordplays. You can also notice dark humor and satirical punches at places. So, if you find yourself smiling while reading thrilling scenes, it is natural.

Two thousand years ago in Rome, the contest would have been staged at the Circus Neronis or the Colosseum, where voracious lions would have been stalking the victim in an arena of blood and sand, eager to tear him to pieces. But this was the civilized twentieth century, and the circus was being staged in the Criminal Courts Building of downtown Manhattan, Courtroom Number 16.

The author hits hard when he wants to. And, “”doing so without explicitly doing so”, is definitely an art. The scene continuous, and describe a character as:

Michael Moretti, sat at the defendant’s table, a silent, handsome man in his early thirties. He was tall and lean, with a face formed of converging planes that gave him a rugged, feral look. He had fashionably styled black hair, a prominent chin with an unexpected dimple in it and deeply set olive-black eyes. He wore a tailored gray suit, a light blue shirt with a darker blue silk tie, and polished, custommade shoes. Except for his eyes, which constantly swept over the courtroom, Michael Moretti was still.

Here is another interesting piece of writing.

In exchange for his life, Stela agreed to sing. It was the most beautiful music Di Silva had ever heard, a song that was going to bring the most powerful Mafia Family in the east to its knees, send Michael Moretti to the electric chair, and elevate Robert Di Silva to the governor’s office in Albany.

It explores many emotions at once. And yes, it glimpses the possible consequences of the particular incident.

Same way the book explores the practical side of Jennifer’s persona, and how people associated with sales behave everwhere.

The real estate agent was a hearty, high-pressure type, the kind of salesman Jennifer hated. But she was not buying his personality, she was buying a house.

Many people will relate with these lines, I think.

The author knows how to concrete the strength of a place or person without explicitly referring to the same:

Here is a comparision between two different streams of profession, that most of the readers will agree with:

Divorce is to the practice of law what proctology is to the practice of medicine. Most divorce lawyers had bad reputations. The maxim was that when a married couple saw red, lawyers saw green. A high-priced divorce lawyer was known as a bomber, for he would use legal high explosives to win a case for a client and, in the process, often destroyed the husband, the wife and the children.

And, when you read descriptions like the following, you cannot keep a brief smile away.

Colella’s got a potato nose, cauliflower ears and a pea brain.

The influence of looking competitive is present in almost all the fields. And even politics is included in the list. A candidate has to perform to lure voters to vote in his/her favor. And media follows them or even make/break them! So, it is a kid of compulsion. Here are some interesting lines in the same regards:

“Stewart, I hate doing those shows. I feel like some goddamned actor up there, performing.”

Stewart nodded, unperturbed. “That’s what politicians are, Adam—actors. Playing a part, being what the public wants them to be. Hell, if politicians acted like themselves in public—what expression do the kids use?—letting it all hang out?—this country’d be a damned monarchy.”

“I don’t like the fact that running for public office has become a personality contest.”

The way life behaves with you, the way people deal with you, your persona changes. The author represents it in simple yet effective manner in a scene:

Oaths had ceased to impress Jennifer long ago. Clients had sworn their innocence to her on the lives of their mothers, wives, sweethearts and children. If God had taken those oaths seriously, there would have been a serious decline in the population.

If you like interesting acronyms and abbreviations, the book has some stuff for you as well.

You will also notice some interesting words/phrases like the following:

These quotes must have given you a fair idea about the book quality and its literary attributes.

The book shows a great bond of love, dedication and sacrifice between Jennifer and her lover. The way, she left him is an example of ultimate sacrifice one can make. Her relationship with Michael, Michael’s obsession for her, the true friendship qualities shown by Jennifer’s confidante, shows various shades of relationship.

The author has explored the function of courts, how law is played with, how emotions are tickled of, are the key ingredients of this book.

If love reading a thriller with a little mature content, periodic twists and turns and expected but unexpected end; this book has all them. The characters have their shades of grey regardless of their gender.

A complete-in-itself entertaining thriller, written for mature readers. Some of the readers may feel that the end of the book could have been different. And, that says how well-written the book is!