History is often debatable. Everyone narrating an incident has his/her own perspective. An incident seen or experienced by a group of people will often come out as different narrations when asked all of them to explain it individually.

Same way, all of us have our own vision and perspective for all the current happenings. While we cannot digest bold and unconventional step(s) taken by the leaders of our time, we tend to do same justice to people from the past, based on our own vision.

There is nothing wrong in it as far as you don’t try to impose your perspective on others. And, yes, why can’t we be open enough to read and hear other’s perspective? We must. In a healthy society, everyone is entitled to his/her opinion and others have to respect it. Killing someone’s thoughts is not lesser than a crime.

And yes, if a majority of people are telling a thing, it doesn’t mean that it cannot be wrong.

Why I am giving voice to these thoughts which may be found arbitrary or out of context by many? Well, recently we were approached by Anuja Chandramouli about her latest book Muhammad Bin Tughlaq: Tale of a Tyrant. And, as always, we were curious to explore her body of work. She is a nice writer and her writings show her conviction. Often, you need to read her book(s) with an open mind. But, an ideal citizen should always read it that way. Always remember the motto of the true Bharatiya (or Indian) civilization:

Let us try to look at the book from a neutral perspective towards the story.

A book cover serves as an entrance to the fictional world explored inside, and thus plays a very important and influensive roles in a reader’s reading and/or purchase decisions. 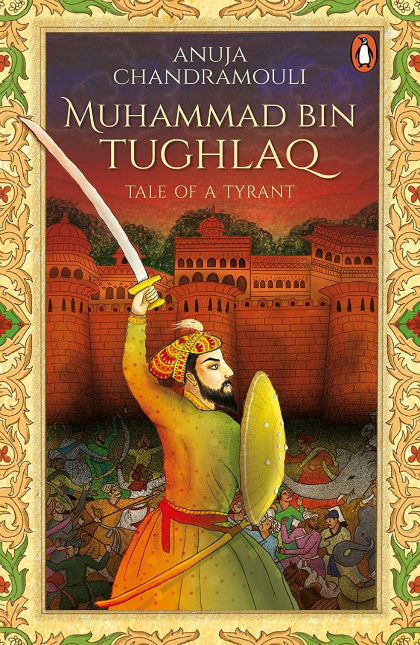 You can see that the book cover is quite attractive. The reflection of Islamic art styles is quite evident in the picture. It will remind you of viewing a portrait of historical time. The golden border adds to the impact. The designer also paid attention in details and you can see the fort in the background and some line drawings reflecting a battle. An impressive coverpage.

The entire tale is distinguished into 3 major segments containing 10 chapters each:

As you can deduce from the segment titles, the tale moves ahead in a linear manner and covers the time from young days of Prince Jauna. It ends when the Sultan was on his deathbed.

From the beginning itself, you are taken into the dark world of politics. When it comes to power and politics, everyone is your competitor. But, one cannot achieve success on his own, he/she need allies too. You cannot make the entire world your enemy and battle alone, there need to be friends who stand by you rock solid. So, prince Jauna also has.

But who is prince Jauna?

Well, you need to pay attention to the story to know it?!

It all starts with the dark void left behind after the time of Allauddin Khilji. He did what he did in his early days when he was young and powerful. But, as it is said, you Karma comes back to haunt you. The last days of Khilji were the worst of his life. The way he was treated by the people he trusted more than anyone else is something unexpected. They are doing unimaginable things with him. In his/her last days, one cares the most about his/her self-respect. And that is what it is at the stake.

Imagine the lessons the confidantes and the kids witnessing this situation will learn from it! And imagine the effects of it on their minds. Politics and power games give thrills when you watch them, but, they draw blood and hurt you when you are part of them.

How the younger ones escape from the situation and how the important one of them is survived with the help of the other on his way; creates the base of the story. Then comes the time when an experienced commandant’s strategies met with the fresh ideas of a young one and they overpower the bigger army. How the successor of the throne is declared, how he rose and how he ruled is in the rest of the story.

I have tried to avoid the spoilers as much as possible. Please be advised that some of them are inevitable so can be found in this review, so read with that consent.

We come to know about various historical characters during our school days. The way it is narrated in the books and explained by the teacher(s), creates an imaginative portrait of the respective character in our mind. However, a person usually is a multidimensional character in real life. And some of the dimensions are not explored in the short space it got in the text book. Then comes the biases of the writer and narrator both.

The author has her own imagination of the character and she tried to present it in this book with a conviction. I will suggest you to not to consider this book as a propaganda in any way. The reasons are simple, (1) The author has mentioned references of the research material for various incidents and (2) Read the “author’s notes” carefully, where she tried exploring the balanced view:

The man was an exceptional scholar, well-versed in theology, rhetoric, poetry, philosophy, economics and finance, with a keen mind imbued with the spirit of enquiry. Many of his ill-advised reforms …were sound, but the manner in which they were enforced left a lot to be desired.

And the author has clearly mentioned that she has added fillers in the story. So, consider it a historical fiction.

The author is quite vocal about many issues in real life also. And she doesn’t leave a chance to take a sarcastic jibe at some of the stuff:

There is next to nothing about his wife (or wives) or progeny, which is truly puzzling since everybody in those times had an unhealthy obsession with the love lives of their sultans and the fecundity of their wives (not that things have changed drastically in these enlightened times!).

And, in terms of literary aspects, the book has some interesting wordplays which will make you keep going through the story.

Girish Karnad gave me the germ of an idea in his wonderful play on Tughlaq.

Possibly this is the last reference of the legendary work of Mr. Karnard (published during his lifetime) who recently breathed his last. A kind of tribute to him. At the same time, notice the word “germ” where you expect “gem” in the above mentioned line. There are a few more proofreading errors in the book.

The author is good at exploring scenes and her way of narrating the story is quite interesting. In fact, the very first lines from the book (the actual content) are evident enough for the same:

The two young men stood in silence on the terrace, oblivious to the splendour of the setting sun, which was discarding its golden rays likes a gorgeous woman undressing at leisure as the sky blushed and shut its eyes, allowing the darkness to descend.

The wind dried his tears before they could be shed.

First couple of chapters introduce a lot of characters and the political game going on, that you may need time to digest them. Of course, if you are history enthusiast then you will find them familiar and the thing might be easy for you. Some of the recent movies life Padmavat also made some characters “known” to the audience (for example, Malik Kafur). However, for a regular reader, paying attention is a must. You may need to re-visit the initial segment in some cases.

The book has some straight forward yet hard-hitting lines about the harsh relities the ruler(s) need to face. Remember the famous lines Heavy is the head…!

If there is one thing that is truly unforgivable in an emperor, it is weakness. Intemperate kindness is a close second.

I have always wondered if it’s power that makes monsters out of men or if it’s only the monsters who successfully capture and wield power.

The conversation between an experienced and a growing up leader (I am not mentioning their relationship intentionally) contains the words of wisdom:

Remember that we cannot achieve the things we seek by depending on the others. All you will ever have is your own head, heart and hands to help you do the needful. Make sure these are in fine fettle and everything else will fall into place.

“But even if you choose not to depend on others, it does not mean that disobedience, defiance or disrespect ought to go unpunished”…

If you ask me about the most interesting lines I found in the book, I would go for:

While watching someone work, we are always convinced we can do better, aren’t we? And while actually engaged in a task, we are confident that none can do it better.

Isn’t it what we are all familiar with. And, aren’t we pass judgment on others’ work without putting ourselves in their shoes?!

Here are a few more interesting lines from the book which are simple yet effective and quite important in their own context:

The only thing worse than a fool is an intellectual who is too clever for his own good.

All parents want their children to have the best life has to offer and be spared its difficulties.

Rather than passing a judgement on whether you agree with the version of the story, I would suggest you read it from the literary perspective. Because, as said earlier, history is seen by different people from a different perspective based on many attributes. So regardless of the authenticity of the story and/or incidents, we shall discuss only literary aspects of the same. And yes, the research work the author has done (from where she has quoted references) should be honored as well. And yes, history is a great teacher, so if you can learn a couple of things “to do” and importantly “not to do”, it will serve the purose.

The book brings you many characters and initially it could be a bumpy ride for you. Actually, a prime character’s transformation into Sultan Muhammad is not explicitly mentioned (especially during the transitional lines between segment 1 and 2), it may make readers confused. To add to the confusion there is the character of Mahmud also. There are places in the book where the author could have added a few lines of explanation within the story to make the things flowing smoothly.

The characters are growing incrementally and various shades of their persona are explored gradually and at the right time, so it adds to the positive attributes of the book. The author is quite neutral and brave to talk about political dark times, war atrocities and other such stuff, adding to her credibility.

Overall a historical book which is written with a conviction, needs to be read with an open mind, and yes, you may find it a little pricey too. Don’t consider it if you are looking for just a time-pass read.