Posted by: Editor February 20, 2020 in Books, English Leave a comment

Re-creating well-known mythological stories is an evergreen genre of the popular literature all around the world. At Thinkerviews, we are always reading such series of books as they show in many ways how the present world interprets these stories – especially how the current moral values measure against the long-established traditions.

The concept of cycling through ages – from birth to destruction – is a central thread in Hindu religion. We strongly believe in the cyclic nature of the Universe and all life and energy within it. The Yugas – Satya, Treta, Dwapar, and Kali showcase different values, different lifestyles and each has manifestations of Vishnu – The Avatars that bring balance back to Universe. The last known Avatar in this series is the Kalki Avatar which is proclaimed to bring an end to the Kaliyuga and the current cycle.

The life and adventures of Kalki were recently imagined and published by author Kevin Missal in a form of trilogy of books. We have shared the reviews of the first two books of this series on Thinkerviews platform before:

Now, the third and final segment of this series is available as Mahayoddha Kalki – Sword of Shiva, and for Team Thinkerviews, I got the chance to read this book and share my thoughts on it. We thank Fingerprint Publishing for providing this book to us for our unbiased review.

The coverpages of this series have been extremely attractive so far and this book does not disappoint either. As you can see below, the front cover features a warrior on horseback. 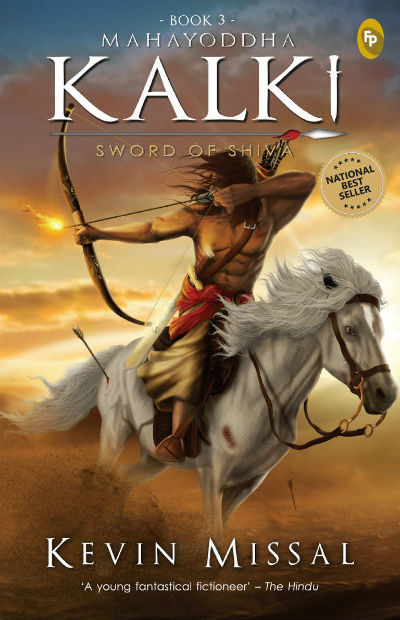 With the dark battleground in the backdrop, the clearly powerful warrior is aiming a flame-tipped arrow at his enemies. The Horse and the rider, both are bruised and battered, yet still fighting. While the brightness of the cover pages of the earlier books was a big draw-in for bookstore browsers, this dark cover page is fitting for the last installment of the series featuring many bloody battles and the huge losses the characters suffer through it. 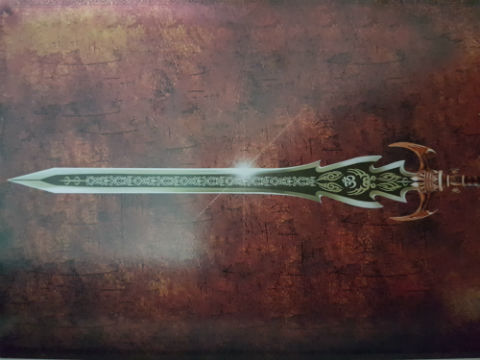 Sword of Shiva – As Depicted In The Book

The sword of Shiva is also featured on the coverpage, although it is not the same sword as shown inside the book as Sword of Shiva. I did find the buckle on the warrior’s strapped quiver very modern too 🙂

When we left the numerous characters of this world at end of Satyayoddha Kalki, the threat of war was imminent with so many factions moving against one another. While the personal battles of the main characters were also reaching turning points.

Mahayoddha Kalki takes us back to the multiple stories including Kalki’s journey towards Bhargav Ram‘s abode, Manasa‘s quest for revenge against Kali and the inner struggles for kingship at Illavarti.

Arjan is now a fine warrior and on his way to becoming the King of Illavarti with the strategic aid from Nalkuvera. But his rise to kingship also brings out the darkness within him and he is now a remorseless killer. On the other end, Manasa doesn’t know that Kali has left Illavarti and she is fighting Illavarti’s army under different kingship. But as Naga attacks continue, Arjan and Illavarti are convinced about Mansa being an evil Snake Queen and want to demolish her army at all costs.

Eventually, Kali does return to Illavarti, with the giants called Danavs. Only the astras made with Soma – equivalents of nuclear weapons in this age – can harm the Danavs. The scroll that contains the details of how to make such astras exists only in one copy which is in possession of the Rakshas Raktapa. Mansa visits Raktapa in his kingdom to obtain this scroll, but ends up in his dungeons and nearly dies trying to escape from there.

In the world of Lord Bajrang, someone is trying to poison his vanars. Padma eventually brings the perpetrator to end with help of Ratna Maru and chides Lord Bajrang for not taking any part in the struggles happening around him. Padma then leaves for Illavarti with a thirst for vengeance in her heart.

Kalki’s journey, however, is far from ending when he finally reaches Bhargav Ram after all the troubles on his way there. He has been deceived throughout all his encounters on this quest and now must face unforeseen threats.

With the armies including Manavs, Nagas, Yakshas, Asuras, Danavs, Rakshasas and all other minor tribes, the fate of the age hangs by a fine thread.

And can Adharm and Dharm be ever embodied by just one person?

With this book, the author has continued to explore the complex world he has created as a setting for his Kalki Hari and his march towards his destiny. He introduces some new characters and completes the stories of the ones we have met in earlier books. It is an entertaining book with elaborate battle scenes and many twisting-turning tales that keep the surprises coming.

The heroes and villains keep changing like shape-shifters as the author challenges perceived views about many legendary characters and creates some new mythical loops. It is easier to keep track of things in this book as all characters are moving toward the central stage of the final battlefield.

The multiple storylines keep the pace of the book, but the development of characters may appear too fast at times as their backgrounds may be summed up in just a few lines, also leaving some contradictions and inconsistencies until you arrive at the next scene which may explain such behaviour. For example, the vanars are being attacked by masked men and the author explains them in a very succinct way:

This mask is worn by the Sons of Shiva. They used to be a majestic warrior class who worked as soldiers at Indra’s palace in Swarg, until they became extinct and dispersed, forming small tribes of their own, growing insane after Breaking. They were once called Maruts but now go by the name of Rudras.

Being the third and final installment of the series, the book had heavy expectations from the readers on all fronts, and in such a complex landscape there are bound to be some loose threads and some sudden endings, e.g. the existence of Rudras is just glimpsed through the story here and the sunyavadis seem to disappear soon after their introduction as well. Rest of the tribals perform their parts of the stories to reach the final concluding battle that will be the end of life as they know it.

Kalki, remains the adorable, good incarnate, a strong warrior who braves all odds and deals with the conspiracies that mar his way throughout the journey to finally become the Avatar of this Yuga. His interactions with Shuko and Devdatta are more like modern day buddies. He also has a strong ally in courageous, resourceful and smart Padma, who also fights her way through battlefields to help her friends in life and avenge them in death. Some of the best lines in the book are delivered through her character:

If bad things happen to you, you must not let them shape you into a bad person. You must not lose the goodness in you.

If you do something, you have to stand by it.

Faith gives people hope. It inspires people to be good, even if the world they live in is corrupt. It assures them that darkness can always be vanquished through the light.

Channeling of previous Avatars have been an important part of Kalki’s training towards becoming an Avatar of Vishnu. In this book, previous Adharmas also channel through the current candidate. Although a lot of you might have guessed where the stories were leading to through the previous books, as this has been one of the secrets of the book, we’ll not share the name of this character to keep the spoiler at bay :).

It is through these channeling though, that the ideological battle of Dharma vs Adharma is spotlighted. For example, the avatars representing Dharma highlight following thoughts:

The power comes from within.

The world and the people in it have a lot to teach. Even so, you must learn to follow your heart, not what the others tell you to do.

Fear drives us to do things we think we are not capable of.

While the previous Adharmas statements are:

I know power go to my head. But did I have to die for that? Did my people deserve to die for that? An Avatar is not a God. He can make a mistake. There needs to be a balance of both good and bad forces for there to be stability in the world.

There is evil in every person.

Being Adharm does not mean being evil. You are just standing opposite the Avatar, not believing in the things he considers right.

As you can see, there is a streak of self-centeredness in the Adharma statements. In my opinion, the final culmination of Adharma of the Yug could have been better. I think the final encounter between Dharm and Adharm also could have been more complex, more intense and more interesting, considering the rich and elaborate canvas of the world depicted here.

We found the concept of Eye of Brahma quite interesting in the last book, but it doesn’t feature much in this one. The concept of Sword of Shiva to annihilate all evil is very fitting, as we know Shiva as the destroyer amongst the Trimurti.

As in previous books, the tone of the book is very ‘current-day’ when it comes to the setting and dialogues. The characters use knives and forks, eat tomato soup and deliver zesty lines in spite of the timeline that puts the era of this book somewhere around 3000 B.C. In fact, as per the timeline there are 16 years between Kalki’s realisation as being Avatar of Vishnu and Kali’s rise to Power. It is definitely something to ponder over as you start the book. 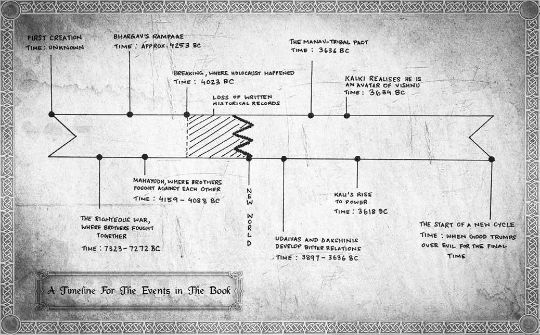 Kalki Series – Timeline – As Depicted In The Book

As usual, let’s share some snappy one-liners with you:

We strive for monarchy and yet we choose democracy to vote for our king.

Everyone gets reckless when they try to kill someone. Even the professionals.

People think they want ideas, but they just want a hero. Anyone. Even a villain can take guise of a god. They’ll worship him if he acts like one.

The best leaders are the ones who keep everyone under their thumb but also pat them on their head once in a while to show respect towards them.

Kevin Missal has mentioned in previous books some of the classic films as his inspiration. This book also will remind you of an Alfred Hitchcock classic when you hear Nalkuvera talking to his dead mother, or Yoda of Star Wars when you read Jambvan’s lines 🙂

There are fewer typos in this book compared to the previous one, but there is scope for correction, For example:

All in all, a book well worth reading for the lovers of this series. The end here is really the beginning – of an era of peace…