If God was a banker is another thriller by banker who is now more famous as an author, Ravi Subramanian. His other books we have reviewed so far are:
1. Bankerupt
2. God Is A Gamer (World’s first BitCoin thriller – published) 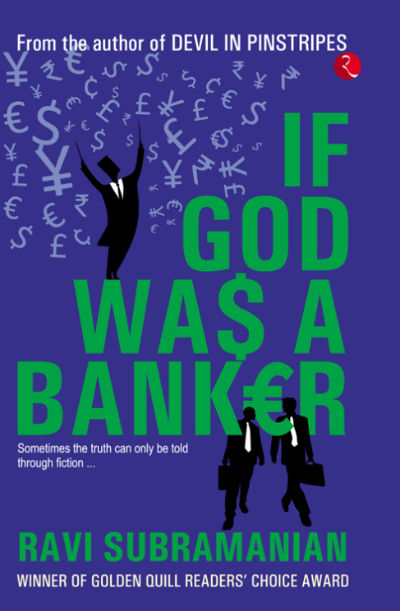 If God Was A Banker – Book Cover

The book If God Was A Banker is a story of rise of the private banks in India. Aditya is working for New York bank. He foresee a fabulous opportunity to grow in the Indian market for any private bank. The reason is the way the nationalised banks working those days.

Till 90s the banks in India were worked almost like rigidly. They haven’t heard words like “customer service” or “consumer satisfaction”, for middle to low class account holders. Getting good services was considered the right of industrialists and business owners who hold good amount of money in the bank. Some laymen find it almost embarrassing to visit the banks. Some employees even treat them as if they were doing the customer a favour. The reality was actually very opposite to that. It is the customer who invest his fortune (and indirectly invest through) in the bank, giving it the very reason for it’s existence. However no one cared about the middle class people.

This is where Aditya thought for a good feature for private banks like NYB. It also seems that the author is conveying his vision behind writing this book through the following line in the book:

Sometimes the truth can only be told through fiction …

If God Was A Banker is a story of two aspiring IIM graduates who enters into the world of Banking without any previous experience. In fact they both were selected from their respective institutions during the campus interview itself. So, both of them are inexperienced and yet confident, visionary, talented and hardworking fellows. But similarities end here. They were quite contrary in terms of persona.

While Sundeep believes in work to be done, without worrying about the methods used to do it; for Swamy, the way of doing thing is also equally (or rather more) important then the result. While Swamy is very ethical, a little introvert, genuine at heart guy; Sundeep is extrover, flamboyant guy for whom ethics doesn’t matter.

Both of them are able to impress their boss Aditya (a top level official in NYB India), who is a no-nonsense, hardowrking, divorced fellow who is very genuine at heart. He is the one who helps Sundeep and Swamy both, even when he was not expected to do.

Entering into the picture there is Kalpana, who was a batchmate of Sundeep who join NYB with him and Swamy. Sundeep wanted to get her (we are not using these words by mistake here) but she eventually falls for simple, honest and genuine Swamy and eventually gets married to her. Natasha, who works at NYB as Aditya’s secretary develops liking for Sundeep. For Sundeep, Natasha was a kind of trophy wife.

There are many other characters in the book, but revolves around these 5 fellows.

The book ends with a message to be hones, genuine and ethical in whatever you do. The wrong ways may give you intermediate success and pleasure, but ultimately leads you to the wrong destination. And, it can even ruin your life alongwith your family’s.

If you are a movie fan and love Bollywood movies, You have definitely heard the famous dialog from the film Deewar:

You can relate it to this book. Telling more about the content will be nothing less than spoiling your reading experience.

Ravi is a banker by profession and witer by passion so he is one of the best persons to explore the world of banking for all the readers. His writing is so convincing that you often feel that you are actually witnessing those incidents. Ravi’s control over the language is really fantastic and is visible in the book at many places pretty loudly.

Even God needs to bespoken to, else he’ll forget that you exist

I play to win and not only for the spirit of the game.

No point getting egoistic with the boss.

People of low integrity are definitely not good for any bank.

Even if we can afford it, we should not spend more than what is required.

When a man tastes continued success, he cannot take failure.

Success is meaningless if you can’t take care of your near and dear ones.

To be a leader you don’t have to be flamboyant or sexy. You have to honestly apply your mind.

On matters of integrity it was always safe to side with the person who has an honest reputation.

In war, there is only the enemy and the mission. We cannot rest until we win.

See how brilliantly he wrote these lines:

‘New York International Bank welcomes you all to hell’
Fr a minute there was stunned silence in the classroom. As if Osama had walked into George Bush’s meeting in the Oval Room at the White House.

He also come up with a fantastic acronym definition when he mentioned the CHILD characteristics:

Character defining lines:
The author introduces us to the attributes of various characters through some nice lines like…

For Aditya, if you leave before him, you haven’t worked hard enough.

Sunil was not a clean guy and his reputation preceded him.

…Because they genuinely felt that Indians were better and intellectually brighter than most of the other people in the world. And, most importantly, Indian were a loyal breed, who would slog their butts out if you did them a favour.

And the following lines make you feel that you are watching a conversation right infront of you:

Sundeep,you now have a job that I held several years ago. It’s a big job now. The lives of a number of individuals depend on you. You have to make sure that you do everything honestly, keeping the interest of your people and your customers in mind.

Sundeep, this is not right. We will be hauled over coal for doing something like this. Customers will lose faith in us.

In our country, we have seen a number of nationalised banks launching big products with half-backed processes and failing miserably.

And from the last fragment of the book, you get this line:

…Today I know, if God was a banker, he would look like you.

The book is written like a masala movie and you will enjoy the most part of it. Especially there are places when you start comparing you / your friends / relatives / coligues or some other known people with the characters of the book. This is Ravi’s success as an author. We didn’t see the world of banking explored so nicely and authentically in any other book.

We bought it at a very very competitive price as an EBook from Flipkart (this feature is discontinued since long), so the price was also a positive point for us.

And yes, it is wroth to note that Ravi Subramanian does a cameo in this book as an auditor 🙂 (Remembering Subhash Ghai doing same in almost all his movies).

As per our opinion, the climax is kind of filmy. However it works for majority of readers, some of us might think that it is too generous. And you might be seeking more punishment for wrongdoers. However let us consider that their own families should not be given punishment of their crimes. But, the climax is tamed and too good to be true.

Also till first 20-25% of the book it is almost fantastic in terms of writing. There enters adultery and other things. There may be a huge part of readership which like it and in terms of writing, the author is able to write the erotic convesations and abusive stuff in quite good manner; we personally doesn’t like it. Of course most of the stuff author wrote is with the intention to make his work more authentic in terms of several facts (which we often not like to accept); and these things are not forced anywhere forcefully. We feel that it could have been avoided or trimmed at least.

Such book deserves a glossary at the end, which can make it more complete.

We also found some typographical / grammtical errors in the book like:

He now started asking tough questions from his team.

Having potential of being converted into a typical masala movie or a TV serial, the book is good in terms of many aspects. The letdowns are lesser than the high points. People who love to read thrillers and watch entertaining masala movies will like to read it for sure.