Is there such a thing as ‘Happily Ever After‘?

When J K Rowling showed us a glimpse of the life of older Harry Potter on the platform 9 3/4 long after the battle of Hogwarts was over, it did give an impression of being something very close to a happily ever after, if not perfect. But, life at its best is episodic….every generation seems to inherit the moral quest of their ancestors in some way and have to go through similar emotions and questions before they can make peace with their lives.

So, when the introduction to J K Rowling‘s latest work starts with : “It was always difficult being Harry Potter and it isn’t much easier now that he is an overworked employed of the Ministry of Magic, a husband, and father of three school-age children….” we do get into it with a sigh of apprehension. Yes, we are talking about ‘Harry Potter and the Cursed Child’, released with a world premier in London’s West End on 30/07/2016. 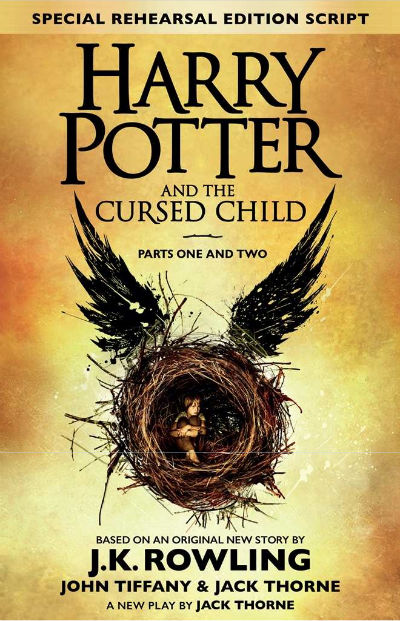 When spares are spared,
When time is turned,
When unseen children murder their fathers,
Then will the Dark Lord return…

As has been widely advertised, while the original story is by J K Rowling, it has been adapted by John Tiffany and Jack Thorne into a script for a new play by Jack Thorne. Both John Tiffany and Jack Thorne are well-known names in the world of theater. However, since the audience for this play on stage would be limited, the rehearsal script has been now published as a hardcover book with a beautifully haunting front page design. Predictably, the book has already been widely sold as the Harry Potter fans couldn’t wait for the next episode into the saga that held them mesmerized over a span of more than a decade.

The book starts with the epilogue from “Harry Potter and the Deathly Hallows“, and we soon discover that Ron is now running a joke shop and Hermione is the minister for magic. Harry is the head of magical law enforcement squad and Ginny works as Sports editor at “Daily Prophet“. What’s different is that the epilogue gave us a distinct impression of Harry being a good father and on very good terms with his children, including his younger son Albus Severus. But, here Albus soon grows into a troubled teen who is best friends with Scorpius Malfoy of all people and whose relationship with Harry Potter is very strained.

While for Harry, Hogwarts was the place where he felt at home, for Albus it is hardly so, especially when he ends up in Slytherin and does not seem to have any marked talent for Quidditch to say the least. It doesn’t help of course that Scorpius has been the center of one of the most widespread rumors in magical world since the Battle of Hogwarts. It is widely believed that Voldemort had a child and that Scorpius is that child. While Draco vehemently rejects these rumors, if Voldemort did have a child, who is it and if the child has survived, what would its outlook on the world be?

If it was difficult to be friends with famous Harry Potter without being jealous, it is nearly impossible to grow up in shadow of a father who destroyed Voldemort and has always been bit of an enigma. Having grown up in limelight, it also means everyone knows everything about Harry’s mistakes and also has an opinion on how he could have done it different, better, how his mistakes cost lives…

So, when a chance seems to present itself to Albus, that looks like an opportunity to right his father’s mistake and prove himself, he takes it. It seems so simple, so appealing, an age old solution: go back in time and change what you did or in this case, what your father did. But, can you really change past? The answers is ‘May be, but not without changing the future and the present’.

Because every decision, every act has long-term consequences. A small change in the course of events may lead to an entirely different future. All Harry’s battles with Voldemort had always evolved around a slim chance, a small and brave decision that eventually led to Harry winning in the battle of Hogwarts. So, if Albus changes any of that- will he also change the outcome of the final battle and the future of their world? And what about the actions of people around Harry, including Albus Dumbledore, who put all his energy into laying out the path for Voldemort’s destruction?

On the other hand, Albus and Scorpius’ disappearances results in strained home lives at all fronts, including Harry’s and Ginny’s. When centaur Bane tells Harry about existence of a dark shadow near his son Albus, naturally Harry thinks of Scorpius as the shadow.

For Albus and Scorpius, the journey proves to be something like an adventure Harry himself would have had and the biggest lesson they learn is the factor of inevitability in all things we do. There is not always an absolute solution / action possible in a human life, especially when fighting an evil. Mistakes are made, chances are mulled, lives are lost and hearts are broken, but sometimes that’s the only way. Sometimes, the whole pattern is so important and yet ambiguous that the simplest action can convert it into either a tangible reality or turn it into utter chaos.

The story essentially has all classic Harry Potter elements – love, friendship, betrayal, victory of good over evil, interconnections of lives, cause and effects, inevitability of the course of every human life. But, the stage adaptation does introduce some new dimensions like dialogues about moody teenagers and so on. The bookworms will also find it a fast read and will miss some of the beautiful and rich detailing by J K Rowling in the original books.

As with other harry potter books, there are some fantastic quotes in this book as well. Here are some of them (however we have tried to not to included the ones which contain the plot spoilers, but you may find some 🙂 )

Friendship, the most favored form of love by the author is mentioned as:

That’s the thing, isn’t it? About friendships. You don’t know what he needs. You only know he needs it.

My father thought he was protecting me. Most of the time. I think you have to make a choice – at a certain point – of the man you want to be. And I tell you that at that time you need a parent or a friend. And if you’ve learnt to hate your parent by then and you have no friends…then you’re all alone. And being alone – that’s so hard. I was alone. And it sent me to a truly dark place. For a long time. Tom Riddle was also a lonely child…”

Words of wisdom, which are grounded to reality:

“They were great men, with huge flaws, and you know what – those flaws almost made them greater.”

He’s Dumbledore! He can cope with anything.

Those that we love never truly leave us, Harry. There are things that death cannont touch. Paint….and memory….and love.
Love blinds. We have both tried to give our sons not what they needed, but what we needed. We’ve been so busy trying to rewrite our own pasts, we’ve blighted their presents.

The book could have been much better and can explore the story with more integrity and versatility if written as a story book rather than a play. The canvas of the book gives even more opportunities (than the explored ones) to explore.

The book price is the only factor which is discouraging to buy it. It is very costly. So it is advisable to wait for a couple of months till the paperback edition is available at cheaper rates.