In most of the online directories, “Books” fall in “entertainment” category. However, if used properly, a book (or for that matter any media) can prove to be an effective medium of spreading awareness, knowledge or a genuine message.

Parenting – is a complicated topic. There can be some general rules, but beyond that, every individual is unique in terms of his/her personality. Of course, each family has different social/financial status. They live in different circumstances and their way of living is different, so their parenting options are also limited.

It is also true that if you want to become an engineer or a doctor or a barber, there is a way to get trained for the same. But, for parenting, there is no such way to get trained. I see a lot of people who become parents just biologically. Parenting is a responsibility, a big responsibility. As, at the end, your action lead to the creation of a social element and these social elements are the future of humankind.

Thus, There are very few people, who talk about parenting, and more importantly, have something significant to say.

Author Manoj V. Jain has penned down a few books before he decided to write down one on parenting. He was not very sure whether he wanted to write it down or not. Even after started writing, there came times when he decided to put it aside. But, eventually, he completed it. The book is provided to us a long ago, but, due to a huge set of books in the queue; it had to wait. We are glad that we read the book, and we can recommend it to any serious reader.

The cover page of the book is the element which creates the first impression of the book. While we strongly believe in not judging a book by its, we accept the influence of a book cover in reading/purchase decisions. And hence, we consider it an important element of a book. 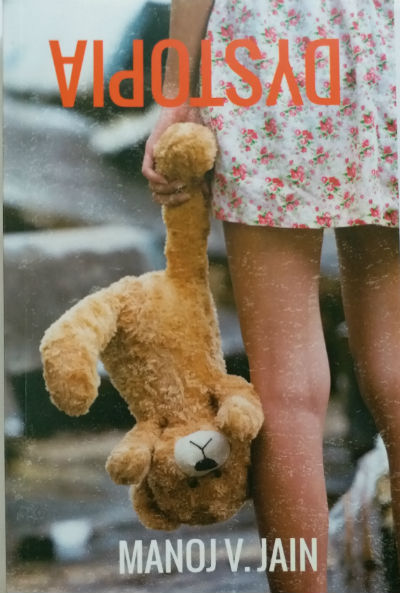 The topic itself is quite different and so does the book title. So, the cover designer’s job is tougher in this case. The bottom half of a girl, holding a toy in a careless manner, shown from the backside. It clearly conveys that a child is lost somewhere in her mind and moving towards something unknown. The small scratches like red particles spread over the cover represent the disturbed state. Overall, the illustrator has tried reflecting the theme of the book very hard and he got moderate success in the same.

The prologue of the book talks about the mental state Anandita is passing through. Finding that there is nowhere go and there is no chance to move forward, she thinks her life is worthless, she commits suicide. The spirit of Dystopia is watching it but unable to do anything to stop her from doing so.

In the present day, Teesha is arranging a party, a union for her school friends which are all separated and were almost out of touch. The careless, joyful and most worthy days of life are the childhood days. And, like everyone else, she was also excited to meet her friends and have a long conversation with all them and catch up with them.

Her only child, her daughter, Roohi was not very keen to attend the party or meet any of her mother’s school friends! Her husband Akshay was out of the city.

One by one the guests arrived and they start having a drinking session with a conversation about their lives. The topics flow from their expectations from life during the childhood days, what they are doing as of now at the professional and personal front and how they are looking at the life.

The Spirit of Dystopia intervenes at regular interval and tells us the backstory of all the characters and help us understand the reason behind the specific mindset and/or behavior.

Over the course of the party, we meet various characters including Reema, Romesh, Kabir, Aniket, and others. The book ends by connecting dots revealing the connection between Anandita and this gang of friends.

Published by The Write Place in 2018 (first edition) this book by Manoj Jain is about parenting as said earlier. I, however, like it to be considered as a “self-discovery” book. And, if you look closely, the (involved) parents are actually growing up with their children. So yes, we can say that genuine parenting involves self discovery :).

The book has distributed the story into two canvases. One is the real world – referred as Shambala. And, other is the world of spirit known as Dystopia. This analogy works perfectly and as a reader, I have enjoyed it.

The book is comparatively small and another good thing about it is the size of fonts. We see that, in order to keep the book size smaller, a large number of books are published with comparatively smaller fonts, which doesn’t go fine with the readers of all age-group. The fonts of the main story are a little bigger and thus are easy on the eyes. The Dystopia world, or the narration by the spirit of Dystopia, is in italics. And, you can find these fonts are less readable in comparison to that of Shambala world.

The book touches many aspects of growing up and parenting. However, the thing I like the most in the book is, it tries to represent the incidents as a third person. Rather than preaching about right and wrong, it represents thing and lets the reader do the rest. The realistic representation of people, family, situation, social enigma, professional hazards, suppressed emotions, and attributes make the book even more worthy. It is not easy to delve into the mindset of people from the various segment of the society, which the author does effectively.

The book is good in terms of literary aspects. For example, a rich wife who feels lonely at times from within, tries to represent that she is accommodated to her wealthy life and enjoying it to the full potential; is represented via the following lines:

She had set the table meticulously, with a measured precision that was intended to impress. … Teesha was meeting her friends after many years; it was important they should know that she had arrived, that she was prosperous, culturally rich and had reached where she wanted to. She realized that she needed to place Anandita’s photograph to complete her dining table setting.

Majority of us, especially form the middle class, are living life in a way that our efforts get recognized and praised by others. To get that attention and words of appreciation, we often go an extra mile(s) and sometimes, people even may not notice it. In the era of social media, the virtual world took over us, and rather than enjoying the company with the real person we are with, or enjoying the food in our plate, or admiring the natural beauty we are witnessing, we rather try to capture those moments and share on various social networks, in a virtual world, and want to represent that we are enjoying. But, enjoyment comes from within, and it doesn’t need any recognition from others. When we expect such things, we make our happiness dependent on others’ opinions.

Here are some lines from the book which must be read and could be used for introspection.

“The kids of today are so lucky,” continued Teesha. “They born in a world of Internet, smartphones and social media. Now anyone is just a click away”.

“Poor them”, said Reema, “if someone wanted to keep away, they wouldn’t be able to hide.”

Isn’t it true? Sometimes, we crave for the time to spend with ourselves. We want to remain isolated for some moments. The rise of technology and overuse of the same, makes it impossible.

The author is good at building scenes are exploring actions of the characters in artistic form. Here is an example:

… the clicking of her heals the only sign she gave her daughter that she was irritated with her responses.

Sometimes, in order to give the child what we wanted to have, but unable to get, due to circumstance or otherwise; we gave them what don’t want or to do things which he/she doesn’t want to! After, being a parent we often do the things which we don’t want our parents to do!

I keep wondering how many people you need to be before you can become yourself.

Does that mean that you should give a completely free hand to a child and let him/her do what he/she wants? Of course, not. Obviously, it is not possible always, and more importantly, even if possible, it must not be given without any moderation. The essence of the message is:

An infant needs a sensitive and responsive parent, so they can have their expectations fulfilled…

By these quotes, you must have got an idea about the quality of the writing and what you can expect from the book. The book has some typos, and some lines could have been written in a better manner.
Here are a couple of examples:

My child, many people have written tomes and done studies on…

A “?” instead of a “.”; at a place. Some words could have been used with care in the book. For example, “bhidhai” is used instead of “bidaai”.

Also, some adult references are there, but the book is meant for mentally adult readers.

Overall, the book has more positives than the letdowns. Definitely, it is not for light reading. Any parent, or even would be parent may not want to miss it. At the same time, it has something for everyone.

Definitely a worth reading book. Though, it doesn’t deliver any message directly, there are a lot of indirect ones which are crystal clear. The book is though-provoking rather than preaching. And, that is the best quality of the book according to my opinion.

Previous: A Small Author Interview With Anuj Tikku | A Professional Travel Blogger From India
Next: Best Hollywood Thrillers That Keep Our Hearts Racing…