Though, SciFi, as a genre fascinate readers, it is not easy to come up with a book series in this zoner. Your story needs to be convincing and it must have the elements which can be extended. Varun Sayal, a data scientist by profession and author by passion achieved the feat beautifully and convincingly.

His journey from a short story collection book to writing the third book in the “Time Travelers” book series is worth taking note of.

This third book in the series is a prequel to the story! And, who knows, like Star Wars movie series, he may come up with a series of prequels too:). Well, I hope so!

Let us take a look at the cover page of Disciples of Trikaal.

Do you believe in love at first sight? Even if you not, then also, you will surely accept that the first impression about almost anything makes a long lasting impact on the viewer. That is true for a book cover as well. 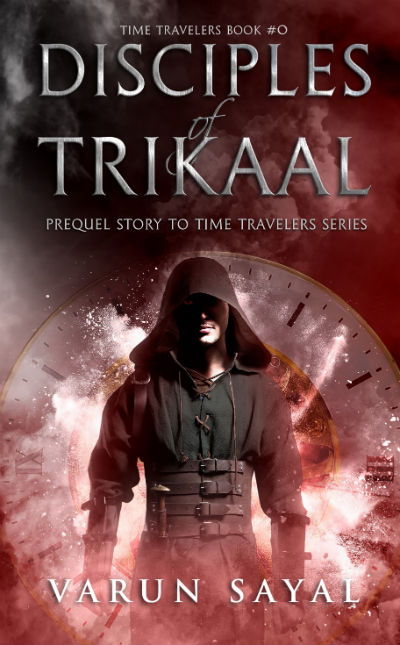 As you can see, the book cover is quite impressive. The use of various shades of white, red, maroon and black in proper proportion makes it an eye-catcher. It doesn’t look overly fancy and not dull either, this balanced approach works in favor of the book cover. I’ve had a complaint about the cover page of both the previous book in the series that some part of the cover page looks blurry and fuzzy. I am happy that the issue is resolved this time :).

A hooded figure in front of a clock dial (representing time) represents the concept of time travelers quite well. The book, however, is for “disciples” (and not “disciple”), so whom the figure matches with? Neither it represents “Trikaal Devi”. Also, the clothing and entire get-up are quite different than the time and incidents explored in the book. So, I personally have mixed views for the cover page. It is impressive, no doubt, but doesn’t represent the content authentically.

The story starts by exploring fictional incidents that happened in 3723 BC, India.

Two dedicated and determined fellows are chanting the mantra to summon Trikaal Devi. The goddess(?!) of time. It is said that “देवाधीनम् जगत सर्वम् मंत्राधीनाश्‍च देवता” – (The Gods control the entire universe, however, the Mantras dominate the Gods.). So, as per the beliefs, Devas are bound to respond to the Mantras which can be used to summon them. And, that is the central thought of penance. Anyway, Trikaal (she doesn’t like to be called or considered as a – Devi) appears to them. She was not pleased by the call, though. But, bound to respond to the energy vibrations released by these two fellows, she anyway has to fulfill their demands. As she is not a “Devi”, she cannot give boons. But, she can grant them the knowledge and skills they ask for. Of course, after rationalizing the same.

And she does the same.

One of them asked for knowledge which can be used for the greater good and the other wanted to master time travel.

Will Trikall give them both what they want or will she put some conditions to the same? Well, it is better to explore it by reading the book, rather than talking about it :). During the course of events, we meet Aru and Nemi, the protagonists of the story. Trikaal Devi – the Goddess of Time, Kalika, Kapitar, Kumbh, Vetri and others.

The author is impressed (rightly) with ancient Indian literature. The idea of two disciples of the same Guru decides to follow two distinctly opposite paths is the central thought of the story. If you have explored ancient Indian literature (and if not, then, now is the right time), you can find the earliest reference of such an act in the tale of Brihaspati and Shukracharya who studied from the same sage – Angiras. It is then followed by many such incidents found in Indian and even modern western literature alike. Anyway, our choices are responsible for what we are, rather than our abilities.

Varun has grown a lot as an author, and in an ARC (Advance Review Copy) of this short EBook I haven’t noticed any proofreading errors apart from a few ones, some of which you will notice in the quotes below. I appreciate this positive change.

There always is a scope of improvement and the book could have been much better if the author use Sanskrit idioms within. If you have noticed, Dan Brown’s popular book Da Vinci Code contains many such French quotes. But, I must reiterate that it is “scope of improvement”, not a letdown attribute of the book.

The author is good at elaborating scenes and you can see it from the beginning of the book.

Both the men prayed atop the mountain peak Pulatsu. A saffron cloth called dhoti wrapped the bottom half of each of their bodies and was tied at the waist. Rudraksh necklaces adorned their frail torsos. Long-drawn beards now covered a large part of their faces and upper neck.

I like the following lines where Trikaal explains her point. Actually, these lines look simple but they contain an essence of a message. When impressed by someone or something, a majority of human beings will talk about it in quite a superlative tone and eventually, it becomes a legend. And then, rather than understanding the message the actions of the legend wanted to convey gets lost and the symbols started being taken into consideration. This what we do in all our spiritual tasks and idol worshipping.

I am not a goddess. I was human once. Millions of years of evolution introduced genetic changes into our species. We found a way to traverse time, to manipulate it, to inverse it. Before the universe went into the reverse crunch, we left our physical bodies. …

Another positive attribute about above mentioned (and many other) lines is the way the author tries integrating Science with Spirituality.

The author beautifully explains why Mantra plays an important role in most of the spiritual aspects found in our civilization.

… They are the ones who documented the mantra, which is my invocation call. They used to word Devi out of respect, which your translation interpreted as goddess. However, I am not duty bound to serve your endless wishes.

Wisdom comes with the experience, and that’s why the elders always try to infuse sense into the kids and adults. As they are at the learning stages or at the peak of their abilities, the earlier they understand is better. The young adults, however, find such things quite boring or old-fashioned and mostly consider them as “too much of precautions before actions”. That’s why parenting is always a great responsibility. The author tries to convey a wisdom message through a character in simple yet effective words.

It depends on you how you mold them and shape their thinking. Depending on the values they get from you, they will either be the angels or demons of time.

Here is a message we found in all the books in this series.

Multiple choices lead to similar outcomes. You can only control your decisions. You cannot control their consequences, only gods can.

If ever asked, which of the lines I found the most interesting in this book, I will opt-out for the following ones:

See, that’s the major difference between us. Its not our powers. It’s our life goals. With your power of clairvoyance, you could have been a god too, like me. …

Of course, there is some stuff for mentally adult readers, as the antagonist(s) are always on the path of material happiness and lust, and thus they commit crimes that are beyond any limits. To explore such things the author needs to use cuss words or abusive stuff. The author, however, has mentioned it in “as a matter of fact” tone rather than with the aim of titillation.

And yes, the balanced weightage to Science and Fiction attributes needs a must mention. For example, “Trikaal” appears to the disciples, but not in a mythologically divine way, she rather appears in the best possible believable way – through a wormhole.

I’ve enjoyed reading this book and I am sure you will too. And yes, if you haven’t read any other books in this series, then also, this book is a good choice as a standalone read as well. A nearly perfect blend of Science, Fiction and Mythology genre.

Demons of Time: Race to the 7th Sunset | A SciFi By Varun Sayal | Book Review