Recently we got a chance to read a book named College Days by debutante author Devayu Mir. As the name suggests, the book explores the college days, often, considered as one of the best periods of one’s life.

During this phase, one is at the pink of the health, his/her ambitions are sky-rocketing and his/her confidence is at the top possible level. If directed in the right way, youth can do wonder during this time. It is also one of the most defining phases of life. And, one is often found the most vulnerable during this phase. So, it is the time to handle with care.

Remember, there were days when we see movie protagonists are college going youngsters?! Such movies spread both right and wrong messages over the decades. One has to be careful about what to pick and what to leave.

Devayu informed us about this book a long ago. Unfortunately, we couldn’t prioritize the book as there were so many books in our “to be read and reviewed” list. Finally, I got a chance to read it from our team and found it worth sharing our genuine and unbiased views for the same.

Being an entrance to the virtual world explored within the bounds, the cover page plays a significant role in making the first impression of the book. 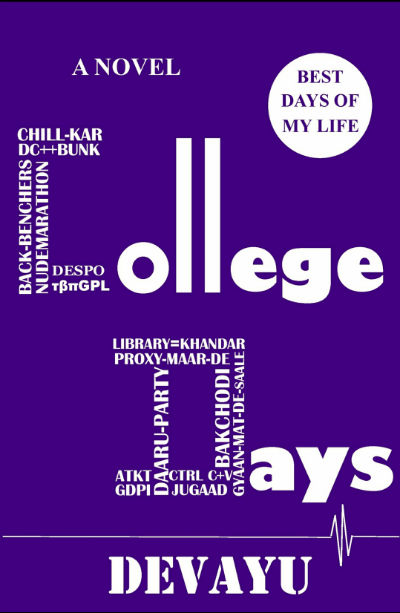 Based on the story and title, the cover page designer could have gone for a large number of choices. The designer, however, has opted out for a simple and minimalistic cover page. The book cover has a shade of purple turning to blue. The title is written in white color and the bottom of the book cover contains dark illustrations. In one sense, the cover conveys the tale within, though, not very attractively. The use of using imagination to infuse words in the first letters of each word (C and D respectively) looks interesting. The cover page could have been much more attractive to create an impression.

What is in the book and how is it written?

We usually distinguish our reviews in two separate segments talking about the book plot and our views about the same respectively. For this book, however, I think making an exception would be better. Because I don’t want to reveal the plot more than the fact that it talks about a band of friend’s journey together in a college. Of course, there is no harm in revealing the names of the characters. So yes, you are going to explore the incidents happen with Neil (Neilabh), Avani, Amancha, Rinichi, Pia, Baba, Chinu, Vinay Jaju, and Atanu sir among others.

The book cover suggests that the book is based on the real-life experiences of the author. Of course, he might have added some fictional stuff to the content to make it interesting. But, the actual proportion of reality and fiction can be mentioned by the author himself.

An interesting thing about this book the place where the incident happens, i.e. the College. In most of such books, we found a college from a metro city or often big names like IIT and IIM. Of course, no institution can be considered as big or small just based on its campus size or fees. It should strictly be based on the quality of education it provides and prepares students for real life. The canvas of the story is set up in Surat, Gujarat, India.

You can see a realistic exploration of environment and incidents happen in a college. In that context, we must say that the author did a good job. Of course, some incidents will remind of famous Gujarati movie “Chhello Divas” or Hindi film “3 Idiots”. In fact, the book language is also something that the current youth can relate to very easily. There is some stuff which makes is to be read by mentally adult readers only.

But, the book is not all about just fun during the college days. The author talks about some real problems the current generation has. We see, more often than not, that the social media took over a large section of the people. They, rather than enjoying the moments, are found more interested in capturing them and sharing them on their profiles! The author talks about it through a character in the book:

Exactly! But I don’t understand people. Do they come to enjoy the natural scenery or for photography? Will they find such a nice weather, such beautiful scenery, such a beautiful ocean view at any other place? It is better to capture it with the eyes than through a lens.

The author is good at writing some interesting one liners like:

The foam didn’t hurt his eyes but the smap message did.

Those who had a chance to live in a hostel can relate to the below mentioned conversation very easily. Of course, not everyone lives the way mentioned, but, read the lines for the humour and reality mixed within. The lines are small yet enough to convey what they are meant to.

Why did you pull out the adapter?
I need to take a hot water bath.
What’s so urgent? You had taken a bath last week.
I did but I have to attend an interview round for summer internship…
— — —
Ghar ki whiskey paani barabar.

I like the way in which the author has used comparatively tough subjects in some light lines. Below given is a block from a long conversation between two important characters. I wanted to mention the entire conversation here, however, I am restricting myself to a few lines only.

I am fascinated by chemistry.
White is sugar,
White is salt,
But both taste differently.
…

You will like the way the conversation moves ahead.

The book is not only about hanky-panky stuff only. It has some interesting lines full of wisdom too.

Love should never suffocate one. It should give freedom to dream and act. People often confuse love with attachment.
— — —
Bhai, always remember, when you know that the bridge is broken, you shouldn’t drive on the road. It is important to take U-turn at the right moment otherwise it will be difficult to turn back.
— — —
Being busy wasn’t a crime. Being ambitious and devoted to work shouldn’t kill a relationship. She had always made a point to spare time for him. …
— — —
You have excuses but aren’t ready for real hard world. You aren’t ready to struggle for anything in life.
— — —
Failures are the scars of an entrepreneur. It shows that you have fought a battle. Like a warrior, embrace it a be proud of it. Also, never ever forget, a true warrior never takes a hit on the same would again.
— — —
Success, dude, success! It has the magical power to wash away any sin.
— — —
… But I disagree. One exam cannot draw a line of fate on your hand.
If there is passion in your life to reach the moon, no one can stop you from flying high.
…
Passion is no less than devotion.

The author seems to get his form with each page he wrote. Here is a scene where he has explored the surrounding like a seasoned author.

The sea waves were crashing and crawling rhythmically to the shore. The horizon seemed faintly lit by the lights of ships. The atmosphere was wafting with the soft voice of Jagjit Singh. The three of them sat around the bonfire while enjoying the cool breeze.

And to add to it here is one more example:

The sun was about to emerge out over the horizon. It was playing Holi with the sky every minute.

I like the way he re-named many popular real life characters. Here is an example:

The author also tries to explore some interesting facts about famous people:

“Have you heard of Roger Moore?”
Neil sang the signature tune of James Bond.
“Exactly! He was very fond of Kesar Kasturi”.
…

Both the genders have their own point of view when making a selection for a life partner, and the author goes ahead to talk about it in an argumentive session.

Don’t be judgemental. If a guy selects a girl on the basis of her looks, then it’s fine but if a girl peeks a little into his bank balance, the world loses its sleep. Don’t we have a right to look for financial stability?

This is a conversation which almost every one of us believes in but avoids talking about it in so straight forward manner.

And yes, there are some fun moments too:

“A guy is coming to see me,” Rinichi said.
“Arranged Marriage! But how could you? I mean you are married to Amancha,” Avani said.
“Thanks for telling me that. I wasn’t aware of it.” Rinichi said.
…

You will find the description of various stages in a computer game quite interesting. In addition to being well-written it is well-thought and researched too.

Like every book, it has its shortcomings too, but for its target readers, I think it serves the purpose.

It is worth to note that before a few days, the book was available absolutely free (Kindle EBook). You should watch out for such promotions and if you buy it during those days, the book is value for money.

A book written for young fellows who enjoy reading about college days. A light read which you can do while traveling also.

Dance in the Rain by Shreya Dutta | Short Book Review