China is in the news since a while now. A large of people and countries blame it for the tragic COVID-19 situation around the world. And, its policy of expansion is also criticized widely. For India, the tragic situation getting even murkier when the army of China tried to invade (or invaded) its borders thinking that the country and countrymen (from India) are busy dealing with Corona Virus situations, it would be easy for them to invade. In the Galwan clash, 20 Indian soldiers are killed brutally by them. Of course, the Indian forces retaliated with their might and the situation went sour for Chinese forces.

Why are we talking about Corona Virus (or China Virus, as some people call it), or Indo-China clash here? Well, the situations are getting trickier and almost all major countries of the world are facing a tough time due to it. And they are joining their hands together to fight China. However, one of the main reasons we bring this topic is, it is related to the book A Spy In China by Indian author Yamini Pustake Bhalerao.

Today, I am going to share my views on behalf of Team ThinkerViews” for the first chapter of this book and will try to avoid spoilers as much as possible.

As this book is released in a progressive manner, actually each chapter is released with a different cover. We will take a look at the cover page of the first chapter here. 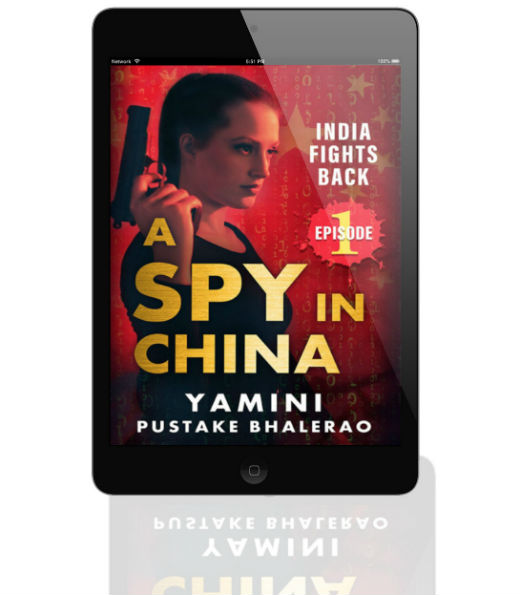 A Spy In China: India Fights Back By Yamini Pustake Bhalerao | Book Cover

When you talk about a spy, possibly the first figure that comes to your mind is James Bond. And the cover page of this book re-inforces this perception. As the book has a female protagonist, you can see a lady on the cover, holding a pistol in style, her hairs are tied tightly. So, it goes in sync with the theme of the book.

The lady, however, doesn’t look like the character she is representing, at least from ethinicity perspective. Also, when you read future chapters you will come to know that she was not given a gun to carry with her! At least in first 3 chapters, she doesn’t have it.

Overall, a cover page which is good but has a scope of improvements for sure.

The Story And My Views And Reviews For It:

While writing a story on the contemporary stuff is a good thing, especially in terms of market, if the story falls flat later on, readers will definitely run away from it.

My initial thoughts about this book, from first 3 chapters, are, that it is promising. And, more importantly it is not written in a propaganda way. It gives due credit to the opponent’s intelligence agencies, their technical expertise, etc. Such balanced and realistic approach makes it “a worth exploring thriller”.

The introduction of the female protagonist is quite interesting. With her introductory scene, we meet with her family also. While her family members doesn’t get much exposure, their characteristics are conveyed effectively. For example, you can see a worried mother and a supportive husband in them. When you are in real love, you don’t need to explain things to the other person, he/she understands it without spoken words. And, rather than creating fuss or mess, he/she supports you. Such a supportive family/friends/relatives is the core strength of a person on his/her way to success. You can give your 100% to your work only if you are not worried about things at your home. Yamini, the author has elaborated this important message quite effectively in the beginning of the book.

The book is started with the site visit by an army officer after the Galwan clash. The author has explored it with the following lines, and you can see that she is capable of exploring scenes and emotions together, without using too many words.

Major General Suryaveer Singh has learned to control his emotions, ensure that death, cruelty, grief or shock didn’t rile him. And yet, as he gazed at this young many lying in front of him, he felt his pulse quicken and mouth turn bitter with anger, something he had grown unfamiliar with.

The book has some character-defining lines that shows the nature of a person. For example, a no-nonsense person who like to complete his/her task effectively using all her/her resources in “say only needed words” manner; is seen in the following line:

Why bother waiting for one question to be answered and then pose a second one when you could get that done in one go?

Same way, rather than formalities, they are keen about the work they need to complete.

It was clear from their demeanor that they didn’t expect any kind of hospitality or even an offer to be seated.

I found some interesting one-liners in this chapter.

There was a thing about wanderlust – it never left a wanderer’s soul.

The author doesn’t leave a chance to have a satirical take on the way news channels are “reporting!” such issues. And yes, the COVID19 situation is referred to wherever necessry.

The visitors entered her house in a single file, keeping respectable distance from her. Indira plopped a generous portion of sanitizer on their palms, which they duly rubbed over their hands and forearms.

And yes, I found some nice word-plays while reading this chapter. For example:

There was a soft knock on the door of her study.

In addition to the army officer, you will find characters like Professor Tej Kapoor, Indira Sanyal (the protagonist), Jatin, Priyadarshini Sanyal, and others.

The quotes above must have given you a fair idea of the quality of writing you can expect in this chapter, and thus, the book. It doesn’t fail to impress a reader as it holds right amount of thrils.

While it is too early to judge a book by just reading a part of it, I found it a promising thriller. And, the next two chapters I read reaffirms this perception.