Around the world, there is a concept of “writer’s collective”. We have talked about it earlier also. Such sort of a franchise is like an arrangement – where the research and writing of the book are completed by partner writer(s) while the mentor (if we can call it so) or the main/popular author does the editing and creates the final version of the book. This collaboration is subjective based on the mutual understanding/contract between the writers.

While it is definitely helpful for novice writers to reach a bigger readership; even the popular writer do such collaboration. It gives them a chance to reach to each other’s readers quite easily. Ultimately, of course, the content matters. So, based on the outcome/the end product, book performs.

Tom Clancy, James Patterson, Ashwin Sanghi, Amish Tripathi are some of the popular writers who ventured into this arena. And, now adding to the list Ravi Subramanian, the author popular for his thrillers set up in the banking arena, has done such a “collab” with Jigs Ashar. The team came with two “shortz” thrillers published the same day.

Today we are going to talk about one of them – A Brutal Hand. 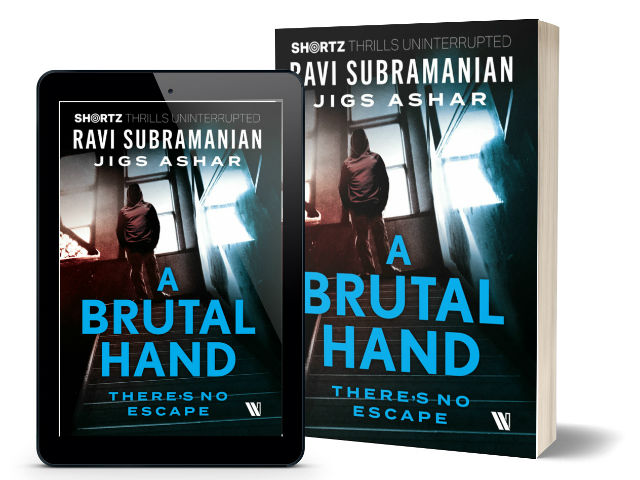 Being a gateway to the virtual world explored within, the book cover plays a very important role in the selling of a book. The first impression counts.

The cover page of the book looks like it is taken from an international quality TV Show. A hooded figure is looking out and the reader can see his back. He is standing on the staircase of a multi-story building in front of a glass window. The cover page could have been a little better. But, the hospital plays a very important role in this book and the cover page resembles a typical hospital setup mixed with the place where the climax (in terms of the chase) happens. So, we can say it is probably the honest most cover page for this book.

It all starts with the murder of a wealthy man in the posh area of Mumbai. A few friends bidding adieu to each other after watching a late-night film at a popular cinema in this metro, eventually loses one of them.

There comes Inspector Abhay Rastogi and his aide Kadam. They are an honest team who does ideal policing and are given the charge of this case. Of course, it is the inspector who is assigned to the case, but his aide also plays a crucial part in this investigation.

One strange thing they found around the dead body of this elderly man is a note. The note has a single word written “Sorry”! No valuables are taken from the unlocked car of the victim so it is the case of “murder with intent”; and the “sorry” note reinforces this assessment.

While the police team was working on this case and trying to find clues and solve the mystery, they are presented with another such case!

What is happening in Mumbai? Is the city known for its 24×7 active life is under any danger? Any psycho killer (or a gang of them) is vandalizing the city? Are these murders connected? Are there more murders in the queue?

Well, you need to read the book to get answers to them all 🙂

This book is marketed as “shortz”, but it is moderate in the length. However, I must say it is gripping, so you won’t find an urge to put it down till you complete it.

There are many characters in the book and the author(s) had given them their due exploration. Often, such thriller shrinks to be either the success journey of the investigating officer(s) or the failure. “A Brutal Hand” is a positive exception here. Rather than exploring the investigation trail only, the author duo explored the full picture of it. This way, when the summarizing segment comes in, you will be able to convincingly connect the dot.

As I have mentioned, there are many characters in the book and the important ones from them are:
Dr. Neel Burban, Charu, Inaya, Jaya Shetty, Inspector Abhay Rastogi, Kadam, Alok Dalal, Manohar, Madhoo Dalal, Nitya, Nitin Karnik, Kunal Roy, Shital Joshi, Dhiraj, Jail Superintendent Ramakant Deshmukh, Arun Bapat, Sarita, Arti Shetye amongst others.

Let me give you an example. While Dr. Burman is an important character in this book like Ins. Rastogi. Like them, Charu is also exploring her talents in another field. She is not just an obedient wife to Dr. Burman. She is now a well-known author who pens crime thrillers. Jaya works as an assistant to the doctor, but she, after being separated from her husband, has raised her son in the most dedicated manner! So, all the characters are strong enough in its own. Regardless of their economic/social status, or gender. Such unbiased characterization makes the book worth reading.

The story is spread over in 76 chapters and you will find it moving with proper pace. Some scenes are written with an intent but later seems to be edited out. For example, when Jaya’s son comes to visit Dr. at his home before he leaves with the inspector to visit their clinic in the later half of the book, the scene expects its conclusive part or explanation later, but it is not there. A regular reader, however, don’t miss anything here.

The author duo came with interesting and detailed description (without getting boring) for almost all the scenes. For example:

Dr. Neel Burman parked his white Audi A3 in the compound of his private clinic in the prime south Mumbai area of Peddar Road. He got out, clutching his Mont Blanc leather briefcase. As was his habit, he checked his Omega; it was a few minutes before 8 a.m.

This description doesn’t require any need to tell that the doctor is doing well with his practice and is moderately rich :). Same way, the opening scene referring to the Carnival Cinemas, Wadala and the “Late night show” is well written.

The scenes in the book must have been written in a way that they help the reader visualize the space being talked about. And, the same happens when you are reading lines like:

To the left of the reception was a passage with storage cabinets on both sides. The passage ended with a restroom on one side and a pantry on the other.

Emotions are elaborate in a similar convincing manner.

He was in an especially foul mood. He had hoped for a relatively easy day at work after having been on duty for days straight.

And, if you think you will find everything just realistic only. Well, there are some detailed scene which makes you feel watching a movie.

He gestured to Kadam, pinching the air with his index finger and thumb, and then waited with his palm outstretched, much like a surgeon in an operation theatre.

And, the authors also mention the harsh reality of the demanding entertainment world in very casual way. It has a very deep meaning and the tone of sarcasm also.

“Yes, just five years in Bollywood, and he needs help.”
“Must be his string of flops,” laughed Neel.

The exploration of Byculla Women’s Prison at Nagpada is one of the most interesting part of the book. The “authors duo” talks about the conditions there and the atrocities being happened in detail. It will make you emotional and draw empathy towards the prisoners. At the same time the authors don’t go into the deep in exploring the situations, they limit themselves in not going for cheap, abusive, vulgar stuff. I consider it a positive attribute of this book.

When the book mentions, the following, the reader will understand the situation:

For eleven years, Deshmukh had ruled over Byculla Women’s Prison as if it were his fiefdom and treated the three hundred inmates as his slaves.

The most heinous of crimes often go unreported, he reflected.

And yes, despite the characters are human and they have their limitations, they have their strength too. Like a well-written police-procedural, this book has some lines elaborating exceptional details in a simple way.

The soft touch was in complete contrast to the stern, almost angry expression that flickered on her face as she looked at her daughter. Although it was only for a fleeting moment, Rastogi did not miss it.

Don’t we need such intelligent officers around us?

The quotes must have given you a fair idea about the quality of writing you can expect from the book. My main aim was to avoid spoilers as far as possible and I have tried to avoid them.

Previous: We of the Forsaken World by Kiran Bhat | Book Review
Next: An Interview With Vivek Kumar – The Author Of – The Forever Years