40 Feet Off The Ground by Shobana Mahadevan | Book Reviews

Posted by: Editor2 September 23, 2018 in Books, English Leave a comment

Recently we were approached by Shobana Mahadevan to inform us about her book 40 Feet Off The Ground. We were not sure about how the reading experience could be. Eventually, I got a chance from our team to read and I found the book quite genuinely written.

Let us take a look at the book cover before we talk about its content. 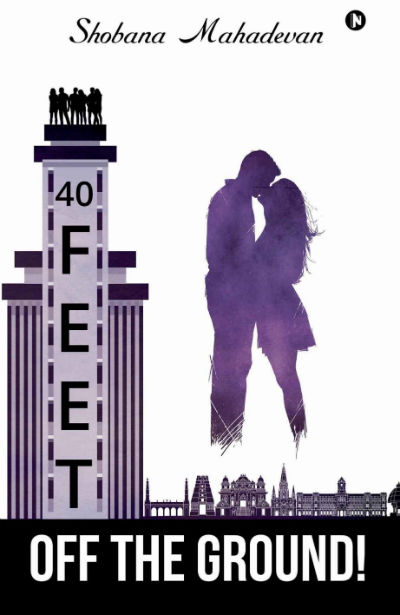 40 Feet Off The Ground by Shobana Mahadevan | Book Cover

As you can see the book cover is a modest one. The illustration of a couple in the famous “Aashiqui” pose (without the coat and rain 🙂 ) gives an impression of a love story explored in the book. In the background, there is a building which represents the college where the story is set up and on the left side, there is a building and on the rooftop, a party is running. So that is the representation of “40 feet above the ground”. Overall, the designers tried to explore the essence of the story in a quite interesting way. The cover, however, could have been better.

Sreya is a young, enthusiastic and clever girl next door who was brought up in a typical middle-class environment in India. She has just recently joined the college and she wanted to do her studies properly. Like any other fellow newcomer, she was also worried about the possible raging in the college and the study environment. She is a no-nonsense girl. She is a modern girl who believed in values and is keen to retain them.

Vishal is a young and attractive boy who joined the same college. Though he is flamboyant and is very popular among girls as well, he has a good sense of judging people. So he behaves with the fellow students accordingly. Despite belonging to a rich family, he doesn’t have the “show-off” attitude. He admires Sreya for everything.

Eventually, Vishal and Sreya became good friends. And they have their group of friends which includes Kavya, Anand, Preethi, Aadhi and others. We see they all have their own way of life. One of the boys (to avoid spoilers I shall not name him) is having a specific attitude towards girls. He doesn’t like to give attention to them and it includes his girlfriend also. Though once when she needed, he did something remarkable for her. But in terms of feelings or any other stuff, he has his own attitude. And it includes ignoring the girl deliberately. One of the girls has a very genuine feeling for a boy in the group, and she keeps herself advising to see the best in him.

Their friendship turns out to be stronger and stronger by passing days, months and even years and eventually every one of them realizes the facts and importance of each other in their lives. What happens to them is actually better to explore by reading this book, rather than talking much about it.

The book is comparatively a small read. And, you will enjoy reading it for the simplicity of the writing. Rather than showing off literary abilities and attributes the author decided to stick to the basic, and it works in favor of the book. The characters are taken from the real life. Reading this book reminded of reading The Last Bloom by Poulomi Sengupta (though both the books are very much different).

Especially the way in which – the mindset of the students (and their families) who’ve just entered college – explored is simply superb. What I like is the fact that the book focuses on the study along with having fun in the college life. And, in reality, college years are the best ones where you need to invest your energy, skills and hard work to define the path of your career. So, practically speaking, they are even more important years than the board exam years.

The book has some gem of writing which spreads wisdom in simple yet effective words:

Life is all about the choices we make, every single day!

As we walk along the path of life, we are guided by our goals, our ambitions, and our dreams. We are clear on what we want and what we don’t. But as we walk, the landscape keeps changing.

Life is predictable most of the time. But sometimes, it is so unpredictable, that it sweeps you off your feet, surprises you, stuns you and shakes you to your very core. And it is for moments like this that life is worth living for.

This is something I like the most in the book. We often call the TV an idiot box, but actually, the Television is not an idiot, but rather the people who waste their time sitting in front of it watching useless stuff are. Of course, it is a good source of knowledge, information, and entertainment. And, even entertainment is necessary for the life. But, the moderation is the most important factor. And, just ask your heart, how many time you’d see it being moderated properly?! I like the houses where TV is not a member and people actually interact with real family when having time together.

Unlikemost houses, the couches were not positioned in front of a television. They were facing each other and the TV was missing.

The life is never predictable and yet we know that it is a wheel of incidents, both sad and happy. Some of the lines in the book which talk about these sentiments in simple yet effective words.

To know was one thing, but to have something you fear being pointed out by someone else, was entirely different.

A tragic loss generally tests relationships. People drift apart or they come closer like never before.

This is another gem of writing I like in the book. It is about experiencing manner-less driving by fellow drivers we encounter in our day-to-day lives and get irritated with the same. It is more important to keep calm rather than losing control on facing such incidents and giving a “benefit of doubt” to the one you found offending. It is about trying to visualize the world from the other people’s perspective too. It is something one should remember or follow when driving.

Sreya, when I drive, I think of it as a video game. There will be obstacles in the form of bad roads and bad drivers, but we have to overcome it. That’s the game. Once you think like that, you won’t get angry. And keep in mind; whether I am driving a bike or a car, I know I am operating heavy machinery. I have to be calm. If I get angry, I can lose control when I need it the most. And when I see a bad driver, I have another game to keep my cool. I give the stranger the benefit of doubt. I think about the reasons for their behavior. It could be something like, ‘That guy is really late to his interview,’ or ‘She just had a fight with her husband.’…

And this is the ultimate piece of advice to keep calm during harsh times (and remain unaffected and keep doing our bits).

We could make resolutions and strategies, but when fate came knocking, we had to let it do its job.

What I like about the book is there are no half-baked characters. Also, the author has avoided adult content, and it makes the book enjoyable without any filter. It is really a good attribute as even popular authors do not avoid the temptation of adding such content in the book for various reasons.

While I cannot include any spoilers (for the sake of your reading experience), I will recommend you to read the experience the group has when they spend their night at a beach. It is quite interesting and it brings our their human qualities.

The author is good at exploring scenes and explaining the surroundings. At the same time, she explores the human emotions in quite believable ways.

If you love to read simple yet inspirational books which can be considered a light read, this book is for you. It is a love story where the characters find themselves and their motto in life.

Previous: Who Are You Stranger? by Shweta Grewal | Book Reviews
Next: Birthright | Episode 2 of Baahubali: The Lost Legends (Season 3) Animation Series | Views and Reviews