Shri Ashwin Sanghi’s second novel in historical fiction genre “Chanakya’s chant” has already made it to 2010 bestseller lists and is in news again with a possibility of being converted into a motion picture. This seems to be a good idea since the book is more or less like a masala Bollywood movie, but with an “A” certificate. 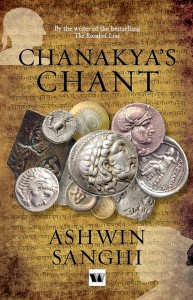 The author tells two stories simultaneously, that of Chanakya, an intelligent boy enraged by murder of his father by the king of Magadha, working towards achieving his goal of uniting India under his protegee Chandragupta Maurya in 340 BC and Pandit Gangasagar Mishra working for a slum child Chandini Gupta in making her political career in modern India with the ultimate goal of getting her the position of the prime minister of India. The author takes us through the life of both the strategists parallely, emphasizing on the similarities of the techniques used by them as Pandit Gangasagar Mishra tries to follow the footsteps of the all time great strategist of India and probably the world.

The stories are full of all the routine elements of political dramas: Betrayals, Murders, Sex, Blackmailing, Fighting, Illegitimate children, Corruption and everything else imaginable with a lot of abusing around. None of the events should appear surprising or shocking to the reader as the modern India has more or less seen all the situations described in the book and the 340 BC characters also do not seem to be out of this world as their stories too appear quite real and relevant to the time. The time line i.e., the period of occurrence of events is hazy as no specific tenures are given, especially in Chandini’s story. The dialogues are made more interesting and fun with known and unknown witty remarks and quotes put at right places.

In the end, Chanakya does succeed in putting Chandragupta on the throne of Magadha by displacing Dhannanda and driving away the Greek invaders eliminating enemies and allies equally mercilessly after their job is done. But the love of his life Suvasini curses him in the end for using her as a tool and leaving her at the mercy of Dhanananda that his strategies would not work any more except someone used those for promoting a woman. It is she who gives the mantra recited repeatedly by Gangasagar and that is Chanakya’s chant. Thus, Shakti trumps Shiva in the end.

Good read for all the thriller lovers. Just don’t forget to keep it out of reach of children…

UPDATE:
He is one of those few authors in India, whose books are having official trailers. It is a good use of technology.