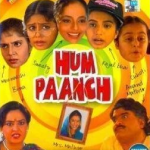 It is not possible to talk about quality Hindi SitComs without mentioning the name of – Hum Paanch. It became so popular in the days it was running, that a second season titled – Hum Paanch – Tadka Maar Ke! was also aired later. Though it was unable to be as popular as the previous series, it got moderate success! ... END_OF_DOCUMENT_TOKEN_TO_BE_REPLACED

In 1989, when it was running the Golden Times for DoorDarshan, Indian Television Network; the TV series “Flop Show” was aired. It was a show written and directed by Mr. Jaspal Bhatti, who himself played one of the protagonist in the same. Jaspal Bhatti is a noted humorist, who took on the current issues in a his own manner. He ... END_OF_DOCUMENT_TOKEN_TO_BE_REPLACED